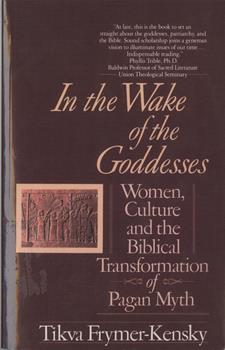 In the Wake of the Goddesses

The current return to spiritual values has spawned a surge of interest in the ancient goddess-based religions as a remedy to a long tradition of misogyny in the Western religions. But how accurate are these current representations of the goddess in polytheism? And did Judeo-Christian religion really turn its back on women? These are some of the questions that scholar and feminist Tivka Frymer-Kensky sets out to answer in this iconoclastic study of...

Must-read for students of Ancient Near East

Published by Thriftbooks.com User , 21 years ago
This is an outstanding work for anyone interested in the goddess mythology of the Ancient Near East and how this was transformed, reinterpreted, and attempted to be eradicated by the Biblical authors. I have used this text as an undergrad, a doctoral student, and in teaching. Invaluable scholarship with excellent footnotes.

Published by Thriftbooks.com User , 23 years ago
I found this book invaluable while researching sacred prostitution and Goddess religions in the ancient Near East for my Masters degree. Frymer-Kensky's articulate discussion of the texts from which we gain our (limited) knowledge of ancient religions exposes the frequently romantic or naive interpretations which have become accepted as history in too many Pagan or Goddess spirituality circles. Her work is scholarly but is definitely accessible to a reader who is interested in this topic. I would recommend this book to anyone interested in Goddess religion, Biblical studies, or women's studies.

Intriguing veiwpoint on the development of partiarchal relig

Published by Thriftbooks.com User , 24 years ago
I read this book at about the same time as Merlin Stone's "When God Was a Woman", and the contrast is powerful. The author has an intriguing perspective on the influence of the Goddess cultures on the development on modern partiarchal religion. Her scholarship seems at times weak; however, overall it's an excellent read and definitely valuable to put the works of other authors into perspective.
Trustpilot
Copyright © 2022 Thriftbooks.com Terms of Use | Privacy Policy | Do Not Sell My Personal Information | Accessibility Statement
ThriftBooks® and the ThriftBooks® logo are registered trademarks of Thrift Books Global, LLC