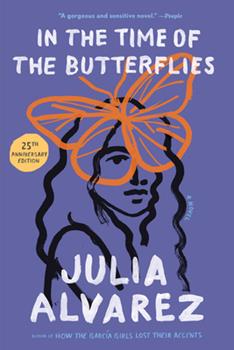 In the Time of the Butterflies

25th Anniversary Edition "A magnificent treasure for all cultures and all time." --St. Petersburg Times It is November 25, 1960, and three beautiful sisters have been found near their wrecked Jeep at the bottom of a 150-foot cliff on the north coast of the Dominican Republic. The official state newspaper reports their deaths as accidental. It does not mention that a fourth sister lives. Nor does it explain that the sisters were among the leading opponents...

Published by lily , 1 year ago
When I first started reading this I did not really understand why so many people told me I should read it. However, by the end of the novel, I was crying my heart out. In a good way. The connection you will have to each character is so strong and I have loved few books as much as In the Time of the Butterflies.

Published by Thriftbooks.com User , 18 years ago
In the Time of the Butterflies is political history rendered read through fiction format and through the gifted poetic, lyrical writing of what we can now claim as a national treasure: Julia Alvarez.The Mirabel sisters, born into a conservative and pious Catholic extended family, were martyred during the last days of Trujillo's dictatorship in the Dominican Republic. The book chronicles their movement, over time, from the pampered bosom of an upper-class family into the cause of revolution. Alvarez, having lived it herself, captures the atmosphere of what it's like to live in a police state, in which the population exists under the threat of atrocities and horror that dare not be acknowledged. As the sisters' fervor turns to tragedy, Alvarez writes movingly of their courageous desperation.Mesmerizing, and as the end of this book approaches, you know what's coming and don't want to read it. I found myself kind of looking out the corner of my eye at the page, reading only half a page at a time, putting it aside, reading again... Spectacular accomplishment.

Published by Thriftbooks.com User , 19 years ago
By means of the sharpened scalpel of fiction, Julia Alvarez carves and shapes the central characters in this difficult and delicate novel as subversive agents who see themselves obligated by fate to participate in the ultimate demise of an oppressive regime. Minerva, Patria, María Teresa, and Dedé, each one in her distinct fashion, break through the tyrannical grip that holds sway over an entire island population for thirty-one nightmarish years. Alvarez is at her absolute best here, far surpassing the previously successful HOW THE GARCÍA GIRLS LOST THEIR ACCENTS. Even the more recent SALOMÉ, in my view, doesn't come across as powerfully (especially for those readers unfamiliar with Dominican cultural history). IN THE TIME OF THE BUTTERFLIES is a masterful work that illustrates the perniciousness of political oppression in every aspect of a society, written in a language of turbulent calmness. As a Dominican myself who experienced first hand the unspeakable horrors of the Trujillo Dictatorship, I admit honestly that Alvarez has presented brilliantly the case of repression and heroism more formidably than any other writer. She has officially immortalized las hermanas Mirabal as national heroines.

The Story of Four Sisters and Their Struggle

Published by Thriftbooks.com User , 22 years ago
Based on actual events, "In the Time of the Butterflies," is a tragic look at the four Mirabal sisters and their struggle to bring an end to the tyrannical regime of the Dominican Republic's most notorious dictator, Rafael Leonidas Trujillo. Known for his ruthlessness and his ability to make his political enemies disappear without a trace, Trujillo's regime was one of the most brutal in Latin American history.After taking over the country with the assistance of the military, Trujillo began a campaign of making himself somewhat of a demigod, even renaming the nation's capital from Santo Domingo to Ciudad Trujillo ("Trujillo City"). During this time, four sisters unified the Dominican resistance in trying to bring freedom and justice to that nation. While their husbands suffered in the nation's worst prison, the Mirabal sisters face uncertain perils and repression from Trujillo's henchmen.While the author doesn't really discuss the main reason for Trujillo's infatuation with one of the sisters, their story is one of the most memorable cases of human rights abuses on record. Trujillo, son of biracial parents, never was accepted into traditional Dominican society due to his skin color. In a country where race plays a very important role in your social standing, this was a slap to the face, and after meeting one of the Mirabal sisters before his ascent to power, and getting rejected by her, it seems like the main motives for their murders was primarily for vengeance. Told from the point of view of the only sister to survive the accident that claimed the lives of the other three, Dede's view is somewhat blurry to an extent. Seeing that some of the novel has fictional dialogue, it is understandable why the novel moves in a slow, yet respectful approach.Julia Alvarez, who also wrote "Yo!" and "How the Garcia Sisters Lost Their Accents" is probably the best writer to come out of the Spanish-speaking Caribbean in recent years. A resident of Vermont, Ms. Alvarez is an intelligent, well-researched woman who has given the world works that explore the trials and tribulations faced by many Dominicans on and off the island. The Mirabal sister's legacy has been remembered worldwide. The date three of the sisters died now has become the United Nation's "International Day Against Violence Towards Women." Also in an ironic twist, one of Dede's sons became Vice-President of the Dominican Republic in 1995 when he and presidential candidate Leonel Fernandez defeated incumbent Joaquin Balaguer in that year's elections. Joaquin Balaguer was Trujillo's protege and right-hand man, and it was at Balaguer's insistance that Trujillo be buried at Paris' Pere LaChaise cemetery (final resting place of "Doors" singer Jim Morrison and author Oscar Wilde) in order to prevent his grave's desecration.Presently, Mexican superstar Salma Hayek has purchased the rights to this novel, and is currently filming the story of the Mirabal sisters into a motion picture that will air on the Show

In the Time of the Butterflies Mentions in Our Blog 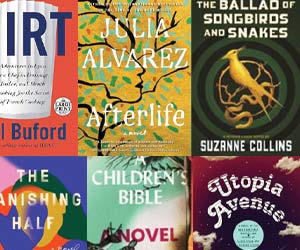 There are a lot of exciting new books coming out! Here are nine of our most highly anticipated titles in the next several months, plus related reads you can get right now.