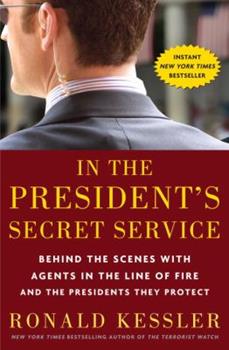 In the President's Secret Service: Behind the Scenes with Agents in the Line of Fire and the Presidents They Protect

Never before has a journalist penetrated the wall of secrecy that surrounds the U.S. Secret Service, that elite corps of agents who pledge to take a bullet to protect the president and his family. After conducting exclusive interviews with more than one hundred current and former Secret Service agents, bestselling author and award-winning reporter Ronald Kessler reveals their secrets for the first time. Secret Service agents, acting as human surveillance...

In The President's Secret Service

Published by Thriftbooks.com User , 13 years ago
Being a political and news "junkie" this book caught my eye. I immediately read this on my Kindle and it did not disappoint. The tid-bids into the various presidents and their families was interesting, but ... For me the better part was the current situation within the Secret Service with cut backs in funding and not being up to date with the best weapons and on and on. This is and enlightening book and well worth the time to read.

Inside the secret service

Published by Thriftbooks.com User , 13 years ago
In this page turner, Kessler has been able to gain the confidence of some Secret Service agents and tells us many inside stories behind what actually happens inside the White House. Who was the president never allowed the secret service or his staff to address him? Which president came to work at 5:00 AM, just for PR and then napped behind closed doors? Which first lady is legally blind? Which president answered questions from reporters while on the toilet? Which presidents were the best to work for? And which president wrote personal checks to people of America that he thought could use a little extra cash? Which of the president's children gave the secret service the most trouble? All this and so much more, makes this book an extremely easy, educational and fun read. Read about the undermanned and undertrained Secret Service, and wonder, in amazement, why another president's life has not been taken by an assassin. Now, if you are a sceptic, you will probably take this book with a "grain of salt," as it does favor certain presidents and their families over others. Great and fun read. Highly recommended!!!

The leading civilian authority on the Secret Service (me) weighs in...

Published by Thriftbooks.com User , 13 years ago
As the leading civilian authority on the United States Secret Service, and as one who briefly corresponded with Ron Kessler, I was most looking forward to this work. In fact, Mr. Kessler wanted to use my work in this book but couldn't locate me ("I actually tried to find you early on but was not successful, so you are not mentioned in the book...I am aware of your work and have read a lot of it. Thank you for your kind comments. I think we agree on some things and not on others"). Having interviewed and corresponded with the most agents ever contacted from the JFK/LBJ era, appearing on national television, radio, newspapers, and so forth, I feel I am thus highly qualified to judge Mr. Kessler's book. The thumbnail sketch first: 5 stars for entertainment, 2.5 to 3 stars for depth of research (but, still, 5 overall because it is a very good read) First, the good news: the book is very readable, well written, and put together. This is no dry book: very entertaining and, in some respects, revealing. Mr. Kessler deserves his many awards and acclaim. Now, for the "bad" news: JUST 5 PAGES FOR THE ENTIRE JFK ERA (LIFE AND DEATH)?!?!? In addition, Mr. Kessler unfortunately accepts at face value the whole notion of "JFK-as-scapegoat" for his very brief foray into the assassination, not letting the readers know that many NAMED agents are on the record (and have been for years) as debunking the whole idea that a) President Kennedy was difficult to protect, b) was reckless in his views on security, or c)that he ordered the agents off his limousine. The Special Agent in Charge of the White House Detail, Jerry Behn, as well as his assistant, Floyd Boring, not to mention MANY others (Rufus Youngblood, Winston Lawson, Bob Lilley, Art Godfrey, Sam Kinney, Sam Sulliman, Frank Stoner, Jerry O'Rourke, etc. etc. etc.) stated forcefully to myself, in no uncertain terms, that JFK was NOT difficult to protect, was in fact easy going, and NEVER ordered the agents off his limousine! To sum it up: you can have Oswald all by himself in the window shooting and no conspiracy and, yet, if the agents would have performed as they normally did, President Kennedy would have lived. THAT is the real story of November 22, 1963. Also, many agents (perhaps out of necessity) are left unnamed, which can be frustrating to researchers and inquiring minds. In that regard, there are NO SOURCE NOTES OR END NOTES! Being that the book is a rather slim size (288 pages), I am suprised at the lack of attribution. Finally, although I personally love it (!), the book sometimes comes across as a Kitty Kelley/ C. David Heymann affair rather than a work of serious scholarship. I am specifically refering to the lurid tales of sex and drinking alleged by several (often unnamed)agents. Still, in the final analysis, I would recommend this book to all...in spite of---as well as for---all the reasons above. Vince Palamara

Honoring the agents and also a great gossipy read

Published by Thriftbooks.com User , 13 years ago
"In the President's Secret Service" is something of a guilty pleasure for those interested in learning more about our nation's presidents and first families and those agents who protect them. Yet it also pays tribute to those agents who put their lives on the line every day for their charges, and also seeks to highlight deficiencies in the agency that desperately need to be addressed. Kessler interviewed a number of active and retired agents in order to describe the dangers the agents and their charges face from a myriad of threats and seeks to personalize the history of this agency that often serves in the shadows and in silence for very obvious reasons. In an age when citizens are critical of the government and it's agencies it is refreshing to read about these genuinely selfless individuals who are literally willing to take a bullet in their line of duty. Secret Service agents are a favorite topic for fiction and for Hollywood, but their portrayal there is often stilted and two dimensional rather than the nuanced portrait Kessler reveals. Agents endure considerable abuse and difficulty with supreme diffidence and their demonstration of duty, honor, and valor that emerges is very much what you would find in the Armed Forces. Along the way Kessler gives readers a healthy amount of anecdotes about Presidents and their families and how they interacted with the agents assigned to protect them. These stories are by turns funny, interesting, and sometimes downright disturbing. Rather than being a distraction from the more serious messages of the book they help to provide levity when needed. Many of these stories give readers greater insight into the agents and their charges, particular how those protected react to having someone shadow their every move. "In the President's Secret Service" is also rather topical as it focuses primarily on the more recent history of the service and recent presidents, primarily from George H. W. Bush to President Obama, but it also does occasionally touch on earlier Administrations. "In the President's Secret Service" is a lively page turner that will certainly inspire confidence in the agents, but Kessler also points out alarming deficiencies in how the agency presently operates and how cutbacks have potentially weakened the effectiveness of their protections. Kessler exposes these weaknesses in the hope of shaming the agency and the branches of government to rectify them. Considering the stakes involved and our ongoing "War on Terror" lets hope that this book is reaching the right people!

RICK "SHAQ" GOLDSTEIN SAYS: "AGENTS WERE TOLD TO TAKE A BULLET FOR THE PRESIDENT & KEEP YOUR MOUTH

Published by Thriftbooks.com User , 13 years ago
Today the Secret Service is in charge of protecting the President... the Vice-President... former President's... world leaders... big events... and even the Pope. Things have come a long way since April 14, 1865 when President Lincoln's bodyguard on duty outside the president's box at Ford's Theatre "was Patrolman John F. Parker of the Washington police. Instead of remaining on guard outside the President's box, Parker wandered off to watch the play, then went to a nearby saloon for a drink". And of course John Wilkes Booth assassinated Lincoln that night. Author Ronald Kessler then leads the reader not only through the growth... both in size... and responsibility... of the United States Secret Service... but he also brings to light... almost limitless Presidential peccadilloes... character traits... and faults... that are almost beyond an average citizens imagination. The revelations in this book go way... way... past the JFK-Marilyn Monroe sexual liaisons... which is almost accepted common knowledge by multiple generations. We're talking about JFK bedding multiple women at the same time... with the security of a Secret Service team with Jackie... giving alerts to JFK if she was on the way back... while he was in the pool with two buxom women wearing nothing but wet T-shirts. We're talking about Lyndon Johnson having multiple sex partners... and even being caught in the act on the couch by Lady Bird Johnson... thus leading an irate LBJ to request a red warning light in his office and other areas that could be activated by agents to alert him when Lady Bird was on the way. LBJ would even have women on his ranch while Lady Bird was home... and simply get up at night and go into a different room for sex. What makes this book so astounding is that ninety-per-cent of the quotes regarding these transgressions... are attributed directly to *NAMED-AGENTS*! With the "secrecy" of the Secret Service... the reader would think... the agents would have been sworn to a life of "OMERTA"... the code of silence. But I guess times have changed both for the Mafia... and the Secret Service. The agents... through the author... pull no punches in any area you could think of. They openly state that LBJ "was uncouth, nasty, and often drunk." They say President Ford was the cheapest guy they ever saw... they say Nixon was the "strangest modern president, Jimmy Carter was known as the least likeable. IF THE TRUE MEASURE OF A MAN IS HOW HE TREATS THE LITTLE PEOPLE, CARTER FLUNKED THE TEST." One agent said "the Carters were the biggest liars in the world"... especially when it came to booze. Agents "considered Nixon's son-in-law David Eisenhower, grandson of former President Dwight Eisenhower the most clueless person they had ever protected." What I've listed here is a miniscule tip of the iceberg of presidential depravity that engulfs the reader's senses like a flash flood annihilating an ant hill. Interspersed with the White House decadence is a myriad of examples of a
Trustpilot
Copyright © 2022 Thriftbooks.com Terms of Use | Privacy Policy | Do Not Sell My Personal Information | Cookie Preferences | Accessibility Statement
ThriftBooks® and the ThriftBooks® logo are registered trademarks of Thrift Books Global, LLC