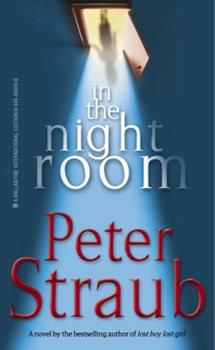 In the Night Room

This description may be from another edition of this product. In his latest soul-chilling novel, bestselling author Peter Straub tells of a famous children's book author who, in the wake of a grotesque accident, realizes that the most basic facts of her...

Published by Thriftbooks.com User , 15 years ago
Peter Straub doesn't just tell a story...he pulls you into his mind and lets you live it. He is the absolute king of the supernatural thriller, a genre he may have created (as far as I can tell). I got a bit of flak from my dean when I said I was going to include Straub in my American Lit class. Then I challenged him to read the man's work before judging based solely on a "genre". Let's just say I won that bet. If you haven't read Straub yet...then go do yourself a favor. Start with Ghost Story and keep going.

Published by Thriftbooks.com User , 15 years ago
At first glance, In the Night Room would probably be classified as horror. After all, it's written by a well-known horror writer, Peter Straub. Maybe, if horror sounded too "common," it might be typed as that classier-sounding genre, dark fantasy. I don't actually think either of these labels fit; if anything, I would probably call this "weird" fiction. To me, weird fiction is a mix of fantasy and horror but more bizarre; Lovecraft would be the father of the genre and Clive Barker would probably be its biggest practitioner today. And while Peter Straub would generally be a writer of horror, In the Night Room is definitely an excursion into the weird, and that's a good thing. In the Night Room is something of a sequel to Straub's previous work, Lost Boy, Lost Girl. While it directly follows from the previous book, it is also something of an anti-sequel: it offers a revision and something of a reversal of the earlier work. In this book, the protagonist is Tim Underhill, a recurring character in other Straub novels. Underhill is currently promoting his soon-to-be-published book that offers his take on the events of Lost Boy, Lost Girl while working on his next novel. Tim's life takes a turn for the strange when he starts getting e-mails from beyond the grave: odd missives from old acquaintances as well as a long-dead Byzantine named Cyrax who will be Tim's guide for the events to follow. Meanwhile, Willy Patrick, another writer, is getting ready for her marriage to Mitchell Faber. Willy, in something of a haze since the death of her child and first husband, is pretty complacent about marrying a man who appears to be a somewhat sinister control freak. She breaks out of this fog, however, when she stumbles upon the fact that Faber killed her husband and kid and furthermore has been stealing money from her. She flees his estate, but he has powerful connections and is close behind. Tim and Willy have a special connection which I won't disclose here, but it is sufficient to make Tim - a lifelong homosexual - fall emotionally and physically in love with her after they meet. The two head towards their hometown of Millhaven, where Tim needs to get the "real" story of Lily and Joseph Kalendar. Joseph Kalendar was a monster (as shown in Lost Boy, Lost Girl), and Tim's new book has related how he killed his daughter, Lily. This was not the case, however, and Joseph's spirit is upset that he is being called the killer of someone he loved (in his own warped way). Joseph's beyond-the-grave anger has upset the cosmic balance, forcing Cyrax to make Tim right some wrongs. Peter Straub is a good but not typically a great writer, but in this book, he does some of his best work. In the Night Room is a well-written page turner. Call it horror, dark fantasy, weird fiction or unclassified, it is a great read, although not the best introduction to Straub because it relies so much on Lost Boy, Lost Girl. But that was a good book too, so I recommend

Where you've never gone before

Published by Thriftbooks.com User , 17 years ago
Peter Straub, long a national treasure, has written his finest novel this time out. His fiction is never less than beautifully polished, as rich in its ideas as it is smooth in its prose, and that is certainly present here. I found some of the most frightening scenes I've ever encountered, including an incredible passage where Tim Underhill and the mystery woman with him do nothing more than gaze at the front window of Joseph Kalender's house as darkness falls. The dialogue always works. In Night Room, it is a large part of what humanizes Tim Underhill, a familiar character from previous novels, but always emerging and taking on a more indelible life. The great triumph of Straub is that he makes you care about his characters, and brings them so vividly alive that you want to spend hour after hour with them. In this novel, he takes that act of creation one step further. Be careful in reading the editorial reviews of this novel -- they not only give it highest marks, they reveal, I think prematurely, one of the most telling twists of Night Room. I will say only that what Straub has done with his characters in this novel is to explore the very nature of the act of such creation, without ever letting the story flag. In Night Room, Straub evokes Philip K. Dick, exploring with even greater skill and insight than that master the central question of Dick's work, namely, What is real? I'll say no more, for fear of giving too much away. Often, the highest praise you will hear about an author is that you couldn't put his novel down. In the Night Room took me a step beyond that. I couldn't bear to finish it. I waited all day for five days to finish my work so I could retire with my cat and this novel and take it in like one would sip a fine cognac. Despite all my efforts to make the unparalleled pleasure of this novel last, it is now over, and I am filled with nothing less than awe. Treat yourself. Buy this novel.

The haunting of Tim Underhill

Published by Thriftbooks.com User , 17 years ago
Like the jazz musicians he favors, Peter Straub has always displayed a penchant for digging deep into his art, examining the tales he tells from several angles, experimenting with their basic components and rhythm. This literary improvisation plays a large role in his classic THE THROAT, which revisited characters, events, settings and themes previously treated in KOKO and MYSTERY, all in an attempt to uncover the "real" story of the Blue Rose Murders, killings which occurred in Millhaven, WI, the author's fictional recreation of his hometown of Milwaukee. It also plays a large part in Straub's latest, IN THE NIGHT ROOM. Straub sent his alter ego (and sometimes collaborator) Tim Underhill back to Millhaven in 2003's LOST BOY LOST GIRL, a haunted house/serial killer/ghost story which netted the author both a Bram Stoker and an International Horror Guild Award for best novel. In that book, readers saw a melancholy Underhill struggling to cope with his beloved nephew's apparent death; attempting to assuage his profound grief, he pieces together a supernatural explanation to account for the boy's disappearance. In IN THE NIGHT ROOM, we discover that the events of LOST BOY LOST GIRL still haunt Underhill, but not in the way one might expect. LOST BOY LOST GIRL, it now appears, was the novel Underhill wrote to cope with the experience, featuring a character named Tim Underhill. Underhill's fictional vision is so powerful, however, that it resonates in another dimension, where Joseph Kalendar, the deceased serial killer who figured so prominently in LOST BOY LOST GIRL, reads the "perfect" version of the novel, becoming maddened and enraged over Underhill's portrayal of his daughter Lily. Kalendar is so affronted by this perceived injustice that he reaches out from beyond the grave to strike at his tormentor; Underhill thus finds himself desperately trying to set things right in order to stave off the killer's increasingly devastating attacks. Complicating his already complex existence, another rent in the fabric of reality produces a truly fantastic traveling companion for Underhill, young adult author Willy Bryce Patrick, whose true origins won't be revealed here for fear of reducing the impact of the surprises Straub has in store for his audience. Thrown together, the duo comes to realize that some debts are so steep they require the ultimate sacrifice. IN THE NIGHT ROOM is beautifully written, boasting Straub's characteristic inventiveness and humor. A deep affection for his varied cast is also evident. Tim Underhill and Willy Patrick are especially captivating, as is book collector Jasper Dan Kohle, Straub's most menacing villain since GHOST STORY's Gregory Bate (yes, even more loathsome than Dick Dart!). Straub toys with several compelling notions in this novel, among them the "Borgesian" idea of the "real book" ("The one you were supposed to write, only you screwed it up."), a creator's love for his creations, and the power of f

Published by Thriftbooks.com User , 17 years ago
Although his critics tend to relegate Mr. Straub to the horror bin, this book should prove at long last he has outgrown such a narrow description. IN THE NIGHT ROOM picks up where last year's LOST BOY LOST GIRL left off, in a way, but the book stands on its on as a novel of outstanding depth, and heart. If Peter Straub isn't nominated for a National Book Award, championed by Oprah Winfrey, and given a glowing review in the New York Times, then the world has proven itself utterly bankrupt. Do yourself a favor. Buy it.
Copyright © 2020 Thriftbooks.com Terms of Use | Privacy Policy | Do Not Sell My Personal Information | Accessibility Statement
ThriftBooks® and the ThriftBooks® logo are registered trademarks of Thrift Books Global, LLC