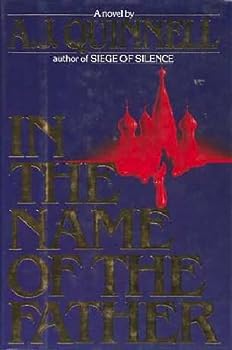 In the Name of the Father

This description may be from another edition of this product. From the author of THE PERFECT KILL, THE BLUE RING, MESSAGE FROM HELL and SNAPSHOT, a Cold War thriller in which a Polish secret policeman becomes the Roman Catholic Church's secret weapon in an...

Published by Thriftbooks.com User , 17 years ago
It appears that most of the reviewers here are young, some of whom have offered such statements as,"Wow! This novel makes you believe that there really WAS a Mirek Scibor, and that he really WAS employed by the Vatican, disguised as a kidney specialist, to kill Yuri Andropov." Well, folks...I got news for you! A.J. Quinnell, the author, was the REAL DEAL. As he himself explained, he had been an intelligence officer--a spy. That had been his job. And THAT is why his book seems "so real," aside from the fact that [get ready!!] Mr. Quinnell himself clearly stated--in several television interviews that I witnessed when the book was first released--that his book was taken from FACTS that he had heard in the intelligence circuit. He appeared on all the morning talk shows for about a week. He said, in fact, that the world of intelligence--just like any other profession--has its coffee houses, "after-set" joints, etc. It's a circuit. And ON that circuit, he learned that Yuri Andropov had been MURDERED by an employ of the Vatican. He decided to write a novel about something that REALLY happened. To us, it all sounds like conspiracy theory. But he said that it was very natural, during the Cold War, even for enemy spies to meet in Vienna [a well-known gathering place of spies of all kinds, for you young folks who may not have known that], and have dinner, drink liquor, and generally exchange news that they'd heard. It's a profession. They hung out, exchanged ideas, shared news, etc., just like people in any other profession. He said that he could easily tell, by the pattern of information he was receiving, that the rumors were on target. He would know! I LOVE this book!! I'm 53 years old. The book came out in the 80s, and I still read it--over and over again. One reviewer hear hit it on the head: the book is, in a sense, very inspirational, in that you feel like anything can be done. The leader of the Soviet Union, at that time, was the most guarded human being on earth. Yet the Vatican [well, or so the "fiction" goes] was able to plant a fake "kidney specialist" right inside the Kremlin...well, I can't tell you the rest of the book! Read for yourself. If your life is very busy, and you have many things on your plate, DON'T READ THIS BOOK!! Because, if you do, you'll be HOOKED! You'll be reading it once a week. Here's what REALLY, REALLY bugs me: How on EARTH has Hollywood missed this novel!!!!! The Cold War is finished. But SOMEBODY should create a flick of this book, before Cold War memories die. [Spielberg, WHERE ARE YOU!!!!!!]

Published by Thriftbooks.com User , 19 years ago
This is a very solid effort by the author. It gave me a bit of a chill during a few parts. This is an interesting story line. I did not think it would work as well as it did. After all the Vatican is not really known for this type of activity. Never less, the author pulled it off. I think the excellent work on the story line did it for me. There were no cheap, convenient moves here. You believe each twist and turn would "of course" be there. The cast of characters is a good one with some memorable lines and personality traits. A fun book that moves fast.

Published by Thriftbooks.com User , 22 years ago
I read this book years ago, and loaned it out to only lose track of its whereabouts. I have been trying to find another copy ever since to no avail. I recall absoulutely being enthralled in the book. Wish I could find it!

One of the most exciting novels I've yet encountered.

Published by Thriftbooks.com User , 23 years ago
What a plot! The Vatican, a little known Polish intelligence organization, a plot to kill Andropov, a defector and a nun... A story so complex and imaginative, it leaves you unsure of the fact that it is really fiction. It is, to me, beyond comprehension that such a book should go out of print. Being the only Quinnell work I have ever come across (since I rarely search out a particular book), I can offer no comparisons. Nonetheless, if you enjoy tales in the genre of espionage, you cannot pass by an oppurtunity to experience the wonder of Mirek Scibor's ironic journey. Set in the mid-1980's, we experience through this character worlds which we knew little about... the religious persecution in the homeland of the Pope, the evil underworld of the Catholic Church, the terrorist training camps of northern Africa, and the political elite of the Eastern Bloc. Even more, we see first hand the inner-struggle of a woman who has dedicated her body and mind to God; and how that commitment to holiness enables her to act counter to all of her instincts in an effort to realize His "apparent" will: The death of the Soviet Premier. Should you read "In the Name of the Father" once, you will surely read it again. It is both haunting and liberating, and I would prefer to believe that it is not entirely fabricated. Mr. Quinnell states most eloquently through his efforts that even the impossible can be accomplished, and that heroes are often found in the most unlikely places. And also, let us not forget, that everyone gets what they deserve.

A hackneyed phrase, but still a cracking good read!

Published by Thriftbooks.com User , 23 years ago
I would reccommend all of A J Quinnell's books to all those readers that are fond of an intelligent thriller set at a cracking pace, whilst maintaining the essence of a "good yarn". It is indeed a pity that this author has been given a higher profile. As with all of the novels, In The Name of The Father has a unique plot, whilst outrageous, remarkably feasable. Equally enigmatic is the fact that A J Quinnell is a pen-name, just who is this mysterious author?
Copyright © 2020 Thriftbooks.com Terms of Use | Privacy Policy | Do Not Sell My Personal Information | Accessibility Statement
ThriftBooks® and the ThriftBooks® logo are registered trademarks of Thrift Books Global, LLC