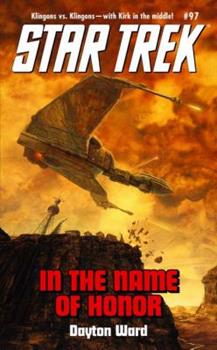 In the Name of Honor (Star Trek)

(Book #97 in the Star Trek: The Original Series Series)

Captain Kirk and the crew of the "U.S.S. Enterprise" discover that all aboard the "U.S.S. Gagarin, " a ship viciously attacked by Klingons ten years ago, remain prisoners on a remote jungle planet. Wth the unexpected assistance of his adversary Koloth, Kirk embarks on a daring rescue mission, knowing that if he fails, the Federation will deny all knowledge of his intentions.

Published by Thriftbooks.com User , 19 years ago
It's about time. I used to love the Star Trek novels to the point that every other book I read was Star Trek. But lately, it seems that they are just cranking them out to capitalize on the franchize without any concern for quality. Many of the recent novels have been poorly written, with characters that don't act or speak like their on-screen counterparts. Most of the books are written by the same few names who, it's obvious, have grown tired of the work but still want the paychecks. It's gotten to the point that I rarely buy the Star Trek books, and then only if I can pick them up used. And even then, most of the newer ones aren't worth the quarter spent at a garage sale.But In the Name of Honor is different. Dayton Ward isn't a writer looking to make a quick buck. He's not an author who's bordom shows through with every new Star Trek book he spits out. He's a fan who genuinely cares about the series, and it really shows in this novel. Kirk was Kirk. Sulu was Sulu. And the Klingons were both believable and multi-faceted, not just the flat one-dimensional villains that often pop up in these pages. The plot was well-conceived and Ward keeps you turning the pages.I've pretty much given up on Star Trek, and only read this book because it was given to me as a gift. Most of my attention has lately focused on quality young adult books, like Harry Potter and King Fortis the Brave written by authors who, like Dayton Ward, really love what they are doing and it shows in their work. But if a few more books like this are published, instead of the gruel that Pocket Books has lately been trying to force-feed us, I may start buying these books again.

THE ORIGIN OF THE BUMPY FOREHEADS

Published by Thriftbooks.com User , 19 years ago
This is how Star Trek should be written. Without the long winded plots that go by the wayside. Dayton Ward is right up there with Peter David, R.A. DeCandido, and Judith and Garfield Reeves-Stevens as great Trek writer. And lets not forget S.D. Perry...For the first time we get to know why the Klingons have bumpy foreheads. The bumps are explained in this one! I just wish the books would take more chances. How about a six part Borg saga? That would truly be a subject worthy of a long paperback series.

ST- In the Name of Honor

Published by Thriftbooks.com User , 19 years ago
This is an excellent book to fill in the gaps from TOS to several movies. It gives the reader an overview of the time with the Klingon's... how ruthless and how embarrassed and the cover-up of a prison camp that is not supposed to exist. We are taken back to the border skirmishes between the Federation and the Klingons. Klingon border patrols crossing the neutral zone and taking prisoners and putting them to work on a jungle planet in the mines. A Klingon gulag and the only way out is death.The survivors from the Gagarin are at the camp but under strange auspices of the Higher Command in the Klingon government. When Captain James T. Kirk hears about the prisoners, he mounts a resuce mission... but who does he trust in the Klingon government to help him... will Starfleet disavow any and all knowledge of the attempt if caught.This book is action packed and has great background for the Star Trek reader. We have an adversary, unexpectedly turning to help Kirk in his quest. We have Klingon vs Klingon... Kirk trying to get the job done... and the Klingon government determined to obliterate any knowledge of the gulag.The is a good action adventure... bad vs good with an overall theme of honor running through it... what is the honorable thing to do. There is excellent characterizations and good thought and emotions come to a boiling point.If you like Kirk et. all and Klingon treachery and later absolution. This novel brings us to the early beginnings of trust between the Federation and the Klingon Empire. Trust to do the right thing and bring honor to ones house. This sets the framework for an alliance in future albeit tenuous at best.A good read... read and enjoy

Star Trek As It Should Be!

Published by Thriftbooks.com User , 19 years ago
This is the first novel by Dayton Ward and it is a superb accomplishment. The plot centers around a peace conference with the notorious Klingons, and also an undercover mission deep in Klingon space. The plot was very well executed, and character development was first rate. This is the kind of writing that could easily be made into a movie, it is that good. There are several references in this novel to events that have taken place in Star Trek movies of yesteryear, Dayton Ward achieved this seamlessly and to great effect. But to me the best points in this book was it's strong personal and emotional content, and philosophical musings. Every Star Trek fan understands the relationship Kirk has with the Klingons, ever since his son David Marcus was murdered by one of them, and this relationship affects Kirk as he deals with this new crises involving Klingons and the Federation. The Klingon Empire is in a state of disarray, with honor, as the Klingons define it, at stake. It is interesting to read about how members of the Federation and of the Klingon Empire view things differently. I found this to be one of the better Star Trek novels I have read, and I highly recommend it.

Published by Thriftbooks.com User , 19 years ago
Any fan of either TOS or the Klingons will find this book extremely satisfying. Set between the 5th and 6th movies this book fills a perfect nitch in the Star Trek universe. "In the Name of Honor" finds Kirk and his old foe Koloth working together to free a group of Federation prisoners from a Klingon prison.With a well balanced and skillfully paced plot the story is wonderful. The characterizations of the familiar characters are spot on and the various Klingon personalities interesting three dimensional characters. As the story unfolds it not only fills in the gaps left by the series and movies about that era of Klingon history, but helps explain the dramatic change in Kirk's attitude toward his long time adversaries. Pick up a copy of this book today. It is a thoroughly enjoyable adventure.
Copyright © 2020 Thriftbooks.com Terms of Use | Privacy Policy | Do Not Sell My Personal Information | Accessibility Statement
ThriftBooks® and the ThriftBooks® logo are registered trademarks of Thrift Books Global, LLC