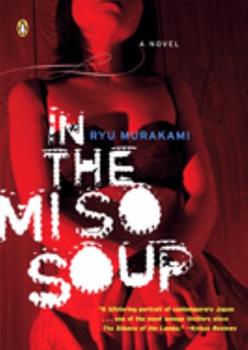 In the Miso Soup

From postmodern Renaissance man Ryu Murakami, master of the psychothriller and director of Tokyo Decadence , comes this hair-raising roller-coaster ride through the nefarious neon-lit world of Tokyo's sex industry. In the Miso Soup tells of Frank, an overweight American tourist who has hired Kenji to take him on a guided tour of Tokyo's sleazy nightlife. But Frank's behavior is so strange that Kenji begins to entertain a horrible suspicion--that his...

Published by Thriftbooks.com User , 14 years ago
This is a good thriller, and though it features an American deranged serial killer and Japanese victims, it avoids typecasting Japanese Good Foreigner Bad by including Kenji's thoughts Japanese society. Prepare to stay up reading, be shocked and frightened.

Published by Thriftbooks.com User , 16 years ago
This book will not please everyone. The journey is dark, and gripping, and it explores things that some may not want to admit its existence. However, I do think that if you are able to stomach the description of the happenings, it is a great book, a story that grabs your attention and make you think about today's society. I guess it helped that I don't formulate visuals in my mind when I read. :)

Published by Thriftbooks.com User , 16 years ago
Ryu Murakami has never written about violence, but about the causes of violence - and not direct, ordinary causes, but the underlying psychological tensions in human beings which lead to violence. The psycopath in the novel, Frank, describes violent tendencies in children as the product of anxiety, an attempt to prove that the world will not collapse when some horrible act is perpetrated. 'Anxiety' is certainly a good term to describe the book, or any of Murakami's - every scene vibrates with an eerie strangeness, and human relations take unexpected turns. In the end, the product is somewhat mystifying, but provides a good read and ample food for thought. What it does best is pair images of extreme innocence and extreme violence, produce alternate reactions of sympathy and disgust, and force a reader to suspend all kinds of belief and judgement until the page-turner narrative is over. Still, what it isn't is a thriller, a character study, or a book with any clear message. The character of Frank could be taken to represent many things - the destructive effect of confused intentions on an insular culture, or a human loneliness common to both this American and the Japanese protagonist, or any misfit lashing out against a restrictive society. In any case, it's one of the most fascinating contemporary novels I've discovered.

Published by Thriftbooks.com User , 17 years ago
I think that too many reviewers are expecting this book to be too much like American novels, and this is where the above reviewers are mistaken. Fans of Murakami or not, the above reviews take in none of the fact that Murakami is NOT American. This is a short 180-novella by a master of his art. Having lived in Japan for the past 7 years (and still living here), I can without a doubt in my mind say, that this book is dead on in its characterization of both American and Japanese characters, its vivid scenery, its execution, and its portrayal of the Japanese society at this current point in time. And why shouldn't it be? It was written by a Japanese author who is in the midst of it. If you are expecting Steven King, move on. If you are expecting Hollywood, move on. If you are expecting something to make the hair on the back of your neck stand up, read! This book is as realistic as it gets. After all... what would you do if you were confronted with a serial killer? Go to the police? Are you sure?

A book that excites you then forces you to think

Published by Thriftbooks.com User , 17 years ago
In the Miso Soup, by Ryu Murakami, is the kind of book that brings up many emotions and stays with the reader long after they have finished it. It is not a long book, although there are long sections that seem to pleasantly drift on for a long time, and there are moments of gripping excitement. Being of half-Japanese descent and having been to Japan twice, I remembered seeing a few seedy districts in the bigger cities and wondering what went on there, but knew to stay away. I am about the age of Kenji, the narrator (he is 20), and this book really offers interesting insight into the two cultures of Japan and The United States. In his relationship with Frank, Kenji learns many things about his own country. The book also offers an interesting look at the sex industry in Japan and the various people who inhabit it. It also offers an interesting look at those who kill others, and of course has an element of one of my favorite topics, the lonely man.This book was one that I thought about when I wasn't reading it and kept me interested throughout. This book has a definite re-read value despite some of its thriller-ish aspects and really made me think about myself, my own culture, and helped me learn more about the Japanese way of thinking. This book is not for the faint of heart or the easily offended as there are viciously detailed depictions of violence and descriptions of the sex industry in Japan.
Copyright © 2020 Thriftbooks.com Terms of Use | Privacy Policy | Do Not Sell My Personal Information | Accessibility Statement
ThriftBooks® and the ThriftBooks® logo are registered trademarks of Thrift Books Global, LLC