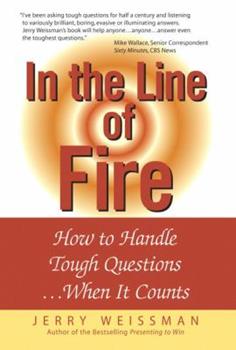 In the Line of Fire: How to Handle Tough Questions When It Counts

You're standing in front of an audience... and you've just been asked the question you'd been dreading. What do you do now? This work seeks to serve as a guide to answering the toughest questions you'll ever face. Using examples from presidential debates to financial investor meetings, it shows you how to respond with perfect assurance.

Published by Thriftbooks.com User , 16 years ago
It's rare to find a book that's not only extremely informative and applicable to real life, but also a user-friendly quick read. The real-life examples cited and explained - with transcripts - are ones that I specifically remember. Many well-known press conferences and political debates are used as specific examples: Clinton vs. George H. Bush (1992), Lloyd Bentsen vs. Quayle (1988), Gore vs. Perot (NAFTA debate, "Larry King" 1993), Kemp vs. Gore. Press conferences are also examined and dissected, using Norman Schwarzkopf, and Colin Powel. The latter considered one of the best ever at using the "Double Buffer," Spontaneously. Many of of the errors of debaters are cited to help the reader identify a missed opportunity or mistake that *could* have been a positive. A victory. But the result was negative; even damaging. By recognizing these errors, we can successfully achieve our own "Top-Spin" in meetings, negotiations, Q & A sessions, sales, etc. REAL-LIFE EXAMPLES OF MISSED OPPORTUNITIES AND MISTAKES: Two examples of missed opportunities in this book came to mind to me for 2 reasons: One, because the missed opportunities were damaging, and two, they didn't need to be. 1. One missed opportunity was President George H. Bush in a 1992 "community forum" debate with Clinton. A women asked a normal and honest question. Bush replied. But he didn't actually answer her question. The women then clarified and repeated her question, asking it again, and H. Bush replied, but again didn't answer the question. At Clinton's turn, Clinton specifically answered the question, scoring big. Bush paid heavily for it (in the polls the next day). This question was about wealthy politicians, leaders, and Presidents "being out of touch." 2. In a 1988 Presidential debate, Michael Dukakis had the opportunity to "Top-Spin" a death penalty question regarding his wife, but missed the opportunity. And the public and spin doctors pounced upon Dukakis's reply, and also how he responded to the question (with a lack of emotion). These seasoned and career orators dropped the ball. In these situations they're asked a spontaneous question that's obviously unknown to them beforehand. They have to respond to the question directly on the spot. Now - add dozens, hundreds, thousands, or millions of people watching, listening, and recording YOU. Your statements, mannerisms, facial expressions, and tone of voice are immortalized, forever. It isn't easy. It takes lots of training and practice. HOW THE READER CAN LEARN TO BE EFFECTIVE BY CORRECTLY USING THIS: Many questions, even ones with good intentions, are often hard to decipher unless we've had training. "Left-brained" questions may not be concise, but rambling. But you still have to find the topic, (the real question), and answer it. And even a "stupid" question needs to be answered in a confident, polite, and self-assuring manner. Even hostile questions. Or, Leading (trap) questions.

Published by Thriftbooks.com User , 17 years ago
When I picked up this book and read the jacket I was a little skeptical. Applying martial arts techniques to answering difficult questions? The concept conjured up thoughts of a drill sergeant yelling answers in a command voice. My skepticism was quickly put to rest. The author provides a methodical approach to dealing with difficult questions. The suggested method is practical, systematic and easy to follow. However, to effectively apply it will take practice. It does draw on martial art techniques and precepts - provide a measured response to address the issue / question in hand. The suggested approach will allow the reader to apply rhetorical analysis to any question, and frame a credible response that is more likely to be positive. Topics covered include active listening and actually addressing the question raised. Without being evasive or defensive. Most of the examples come from the field of Politics. Some are drawn from senior executive briefings (e.g. briefing market analysts for an IPO). Will this book improve the average person's presentation skills? The examples are from the most aggressive debating arena (political debate), however, they can be applied anywhere. There is a companion DVD to this book - it is well worth obtaining. It superbly illustrates common pitfalls and best practice. The two resources, taken together, are a very valuable resource for anyone who has to face tough questioning as part of their career.

When You're On the Spot

Published by Thriftbooks.com User , 17 years ago
Using stills from various Presidential Debates and political news conferences, Weissman shows how to...and how NOT to...handle the tough questions that people use to put you on the spot. It's rare that an author succeeds at showing people how to communicate *effectively* and this author has succeeded. A number of examples that Weissman uses to clarify his keypoints are backed up by polling numbers showing what the public thought of certain communication glitches that lingered in viewers minds. Though not a truly scientific analysis, it is as good as it comes in helping the reader find out whether a point was "won" or whether it was "effective." The point of course is that winning a point is not the same as winning an election...or making the sale. One example points out Ross Perot successfully putting Al Gore into the losers corner on a specific question, but then shows why it might have been better to not win the point, but the audience. And Weissman shows how. The book is easy to read and you come away with a real education in handling tough questions. The book delivers. Kevin Hogan Author of The Psychology of Persuasion and The Science of Influence

Published by Thriftbooks.com User , 17 years ago
The purpose of this book is to enable one to be an effective and confident speaker when challenged, whether this is in front of the press, during a presentation, or any other setting in which potentially hostile questions are directed at you. As such, there are ways to avoid defensiveness, stay in control, and win over even the toughest of critics. I was not expecting the brilliance of the book, quite frankly. I read a lot and "self-help" type books on speaking and communications and they tend to start blurring together, so I was pleasantly surprised to be so captivated and helped by this one. The book is easy to read and explores dozens of techniques on how to really listen to the true meaning behind the questions, how to rephrase, of create buffers which give you time to think, how to use various other methodologies to always stay in control. All of these were very well written and especially well illustrated with examples, both of the skills being done well, and not so well. The result is a remarkable clarity on how to improve. Some of the highlights for me were the sections on avoiding negative wording, and defensiveness. The classic blunders of many politicians were used as examples of how not to respond so we see that even the most seasoned and experienced can make mistakes. I found myself many times wincing through a sense of self criticism of my own past responses, which often unfortunately had the same poor results as those depicted here. Every time, there were excellent examples of how small changes in approach or wording could make a huge difference in the result. I walked away from a short read with some really powerful mindset shifts on the subject. Overall, the book is truly a gem. I cannot think of anyone who ever presents to groups, or engages in public speaking and faces Q & A's and other types of verbal interactions that would not be greatly influenced by these simple training techniques. While at times the author seems obviously biased politically, he does a credible job in the end of trying to show positive and negative examples on both sides of the political fence. Highly recommended, and a must for executives and all leaders engaged in the practice of public speaking.

What to say, what NOT to say

Published by Thriftbooks.com User , 17 years ago
During a televised presidential debate in 1992, George H. Bush looked at his wristwatch as a woman from the audience asked a question. His subsequent attempt to answer her question failed, and those offered by his competitors (Ross Perot and Bill Clinton) were much more on target. What should he have done differently? That's one of the real-life examples studied in "In the Line of Fire." Author Jerry Weissman has years of experience coaching high-profile executives in presentation skills. Invaluable too is his background as a television producer who worked with Mike Wallace, one of the toughest interviewers of all time. When asked a crucial question in a public forum, a novice may panic and freeze. Weissman shows how the speaker can control the question, the answer, the questioner, the audience, the time, and himself/herself -- and create and maintain a positive image in the process. Weissman provides techniques that will help someone defuse hostile inquiries without being defensive, evasive, or contentious. When you get right down to it, most of these strategies seem obvious and logical. Rely on absolute truth. Honor the audience. Listen effectively. Paraphrase and restate the Roman Column (the key issue) of the question. Identify and develop position statements for each red flag issue. Achieve Topspin. Prepare and practice, practice and prepare. What makes this book additionally entertaining as well as educational is the use of real-life case studies from the realms of television, sports, and most of all, politics. After all, "Politicians speak far more often than do mere mortals." (p. 120) Transcript excerpts and still photos from presidential debates (1960-2004) and official press conferences serve to show what to say and do, and what NOT to say and do. Here we see the best and the worst of the figures we're all too familiar with: Lloyd Bentsen, George H. Bush, George W. Bush, Bill Clinton, Michael Dukakis, Al Gore, John Kerry, Trent Lott, Ross Perot, Colin Powell, Dan Quayle, Ronald Reagan, and Norman Schwarzkopf. The narrative is an amusing but instructive walk down Memory Lane. With such prime examples to refer to, we're more apt to remember their successes and failures. My sole criticism is that the case studies are exclusively MALE. What, no Hillary Rodham Clinton? No Geraldine Ferraro? No Janet Reno? No Condi Rice? Maybe women don't make the same mistakes that men do. Nevertheless, "In the Line of Fire" is an engaging read, aimed primarily at those folks who do presentations and then field Q & A sessions afterward. It is relevant to anyone in a position of authority who must deal with the public or with employees or colleagues. It offers good advice for everybody, even those not running for the presidency of a country, a company, or a community group. The examples are clear, easy to understand, and empowering. This book is a good resource to chew on once, mull over, then revisit before walking out to the
Trustpilot
Copyright © 2022 Thriftbooks.com Terms of Use | Privacy Policy | Do Not Sell My Personal Information | Cookie Preferences | Accessibility Statement
ThriftBooks® and the ThriftBooks® logo are registered trademarks of Thrift Books Global, LLC