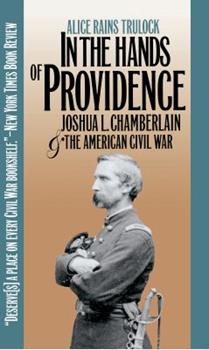 In the Hands of Providence: Joshua L. Chamberlain and the American Civil War

Deserve s] a place on every Civil War bookshelf.-- New York Times Book Review " Trulock] brings her subject alive and escorts him through a brilliant career. One can easily say that the definitive work on Joshua Chamberlain has now been done.--James Robertson, Richmond Times-Dispatch "An example of history as it should be written. The author combines exhaustive research with an engaging prose style to produce a compelling narrative which will interest...

Published by Thriftbooks.com User , 15 years ago
In the Hands of Providence is a very well researched look of the life of Joshua Lawrence Chamberlain. Alice Turlock presents a definitive biography of this modest professor from Bowden College, who met challenge after challenge to become one of the greatest leaders in Civil War history. Chamberlain had extraordinary observational and superb writing skills. His persistence at recording the historic events, which included his emotional reactions, gave Trulock's wonderful historic accounts for her book. The book starts by giving us an in depth look at his obscure Christian upbringing in rural Maine, and follows his processes of becoming a great young man. He was an exceptional college student, receiving the praise of his instructors. He was also highly regarded by his neighbors and towns' folk alike. Many considered him to have the highest moral and ethical standard. He was so trusted and respected as a young man in his home town that an older business man of Maine, who was an acquaintance of Chamberlain's, entrusted him with the dealings of his estate. While finishing his studies at Bowden, Chamberlain married his sweetheart Frances Caroline Adams. They had a very close and loving relationship. But during the war, the constant distance between them put a great deal of strain on their relationship. After graduation, he accepted a position as a professor at Bowden, and held that position for several years. Chamberlain maintained a very close relationship with his family, and he was especially close to his father in law George Adams. When the war broke out in 1861, Chamberlain ask for a leave of absence from Bowden to enlist, but was turned down. Not to be left out of the war, he again applied for a sabbatical to study in Europe, and this time it was granted. He had no intentions on going to Europe, and instead immediately enlisted in the army as a lieutenant colonel, and never looked back. He played a huge role in the recruitment of the men for a regiment, which would later come to be known as the 20th Maine. With no military experience, Chamberlain showed great promise in his leadership shills and military expertise. He became friends with his unit's commander, Colonial Ames, who became his tutor. According to Trulock, Chamberlain held a great deal of respect and admiration for Ames, and he gave Ames credit for his military success. Trulock's description of Chamberlain's military life is extraordinary, and she supplies us with great details about the battles in which he was involved. At the battle of Antietam, Chamberlain was not directly involved in the fighting but was brought up in reserve the next day. Trulock gives a very vivid description of horror that Chamberlain witnessed upon arriving at the battlefield that day where 22,000 lay dead or wounded on the field. It was the bloodiest, one day battle in the Civil War. Next, she transports us to the Fredericksburg, and the final assault by the North on Marye's Hei

Published by Thriftbooks.com User , 21 years ago
"In the Hands of Providence" is a masterful biography of Joshua Lawrence Chamberlain, one of the great Americans of the nineteenth century, and certainly one of the most heroic and hardest fighting U.S. Army officers of all time. The author, the late Alice Rains Trulock, presents a well researched, meticulously documented, and detailed portrait of this brilliant and courageous man. She traces Chamberlain's early life and career - first, as a student, and later as Professor of Rhetoric (and other subjects) at Bowdoin College in Brunswick, Maine. Chamberlain's military career - his rise from command of the 20th Maine to general officer rank in the Union army, and his outstanding leadership and valor during some of the fiercest and bloodiest battles of the Civil War, including Fredericksburg, Gettysburg, Petersburg, and Five Forks - is then chronicled with some of Trulock's liveliest and most exciting prose. (Chamberlain, of course, is best known for his actions as Colonel of the 20th Maine Volunteers at the Battle of Gettysburg. Here Trulock describes in detail the events of July 2, 1863, when he led his 380-man regiment in its successful defense of Little Round Top, thereby saving the Union army from a crushing defeat, and ensuring his own place in the pantheon of American military heroes.) Trulock also details Chamberlain's post-Civil War career as Governor of Maine (1867-1871); President of Bowdoin College (1871-1883); and unsuccessful businessman. In addition to providing obviously well researched and superbly written descriptions of Chamberlain's military, political and business accomplishments, "In the Hands of Providence" also gives the reader a balanced and objective look at Chamberlain's personal life. Especially enjoyable and informative are the descriptions of his relationships with his wife Fannie; his daughter Grace and son Harold Wyllys; and his brother Tom. The author does a wonderful job of allowing the reader to get to know Chamberlain the warm hearted and loving family man, as well as Chamberlain the patriot, scholar, college professor and president, military hero, and Governor of Maine. "In the Hands of Providence" is the best modern biography of one of the most extraordinary and gifted Americans of the nineteenth century. Highly recommended!

Published by Thriftbooks.com User , 22 years ago
Those interested in the Civil War are familiar with Gen J. L. Chamberlain and the amazimg events at Little Round Top. Many might not know the particulars of one of this period's unassuming but greatest citizens. This biography shows us, in depth and in a very masterfulful way, the fascinations in Gen. Chamberlain's character. Trulock and Nolan have produced one of the better biographies written about any person, and arguably the most scholarly work ever published concerning Gen. Chamberlain. The title gives a hint of the magic within the work. The amazing life of this man, and the way he was the right man with the right background and temperment at the right place and at the right time to shape the history of the United States and the outcome of the war does indeed seem to come from providence. One can only imagine what this country would be today had not Chamberlain been present at Little Round Top, denying the CSA the high ground. A CSA victory may well have ended in an eventual negotiated peace or many more years of bloodshed. Also, it was only fitting that Chamberlain should have commanded the troops at the Confederate Army's surrender, and it is likely only he would have ordered the Union Army salute of the parading southern soldiers as he did, thus making the initial gesture toward respect and reconciliation. Beyound the battlefield, Joshua Chamberlain was a unique American and an amazing human being of his time. His story pours from the pages of this book in a fashion which leaves the reader wanting more and in the end feeling quite close to the man. No one interested in the Civil War should go without reading this book.

"My favorite character/hero of the Civil War"

Published by Thriftbooks.com User , 23 years ago
This book does an amazing and complete job of allowing us to follow the story of Maj.Gen. J.L.Chamberlain. It is very informative, descriptive, and moving, and includes some great photos, quotes, and helpful maps to guide you through the story. I've never felt closer to a person through a book before, until this one, and was sad to have finished it. I may have to revisit his story again, and many more times thereafter.

Published by Thriftbooks.com User , 23 years ago
Joshua Lawrence Chamberlain - In The Hands of Providence is truly an inspirational work about a truly inspirational man. Alice Rains Trulock has accomplished what many Civil War authors strive towards ... the ability to make readers feel "deep down inside" for their subject. She allows one to feel as if one was right along side Chamberlain in his happiness and in his struggles, from boyhood to honorable manhood. And upon reading of Chamberlains death in 1914, one feels as if they've lost a friend. If Chamberlain were alive today, he would most certainly be proud that the story of his life was so beautifully written.
Copyright © 2022 Thriftbooks.com Terms of Use | Privacy Policy | Do Not Sell My Personal Information | Accessibility Statement
ThriftBooks® and the ThriftBooks® logo are registered trademarks of Thrift Books Global, LLC