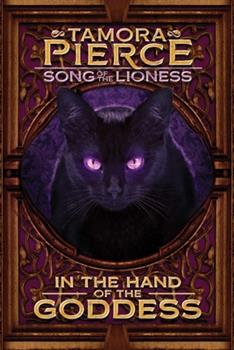 In the Hand of the Goddess, 2

From Tamora Pierce, the second book in the Song of the Lioness Quartet, honored with the Margaret A. Edwards Award. Alanna, disguised as a boy, becomes a squire to none other than the heir to the throne. Prince Jonathan is not only Alanna's liege lord, he is also her best friend--and one of the few who knows the secret of her true identity. But when a vicious sorcerer threatens the prince's life, it will take all of Alanna's skill, strength, and magical...

look past the cover!

Published by Rose Bryce , 1 year ago
This book is veerrry badly in need of a NEW cover! Honestly folks! She's a wonderful wtiter! Give her a chance in spite of this really dumb, badly done cover "art"! She certainly deserves better! Loads better!

Alanna's Adventures As A Squire Continue

Published by Thriftbooks.com User , 16 years ago
SONG OF THE LIONESS: BOOK II - IN THE HAND OF THE GODDESS, takes us through three-years of Alanna of Trebond's life, from her fifteenth birthday, through her eighteenth. Alanna is still disguised as a boy, with few people knowing her true identity. She has claimed the duty of being Squire to Prince Jonathan, her lord and best friend. Jonathan knows Alanna's secret, and vows to keep it just that, in an attempt to help her win her knight's shield. However, now a mysterious sorcerer has come out in an attempt to attack the prince. Alanna knows that it is up to her as the prince's squire and best friend, to protect him from the sorcerer by using her magical powers, and learned strengths and skills that will keep him safe from harm, even if, by doing so, her true identity is revealed to those around her. I could never imagine myself enjoying books about a girl trying to become a knight, but I find myself hungrily devouring Tamora Pierce's SONG OF THE LIONESS books one by one at record speed. Each one leaves me on the edge of my seat, and unable to close the book until I am completely done with them. IN THE HAND OF THE GODDESS is no acception. I enjoyed Alanna's personality even more in this installment in the quartet than in the first one, ALANNA: THE FIRST ADVENTURE. It was wonderful to see Alanna embracing her feminine side, yet, at the same time, holding tight to her feisty side. I also enjoyed that we were able to meet her twin brother better, and learn a bit more about him. Pierce has outdone herself with this series, and will find new fans, young and old, grappling to read about the amazing adventures that her characters face in each installment. A wonderful book that will be loved by all. Erika Sorocco Book Review Columnist for The Community Bugle Newspaper

The Best of the entire Series!

Published by Thriftbooks.com User , 20 years ago
Even though I read the Song of the Lioness series years and years ago, they are still my favorite books. Pierce's storytelling is flawless and her characters Alanna, Jonathon, Roger, George, Gary and everyone else are incredibly interesting and human. There is a great sense of adventure, starting in the beginning when Alanna duels a knight from another province during a banquet. She is later sent to the warfront, where she has more adventures, tracks Duke Roger's suspicious behavior, and has the first hint of romance. Alanna's experience with magic develops, and I loved reading about her encounter with the goddess and how she sees through Roger's magical tricks, aided with the power of her amethyst charm. The suspense with Duke Roger, her nemesis who no one else suspects of evil, builds to a thrilling climax and provides her with the chance to really prove herself. I was equally thrilled with the romance in the book -- just the right balance with her experiences as she strives to become a Knight of the Realm. "In the Hand of the Goddess" is far and away the best fantasy book I've ever read. I can't think of any book to recommend more highly, except perhaps "Alanna: THe First Adventure" since it provides the background for this one.

Best Book in the Series

Published by Thriftbooks.com User , 21 years ago
By Far, this is my favorite book in the Lioness series. All four of the books are excellent, but this is the book where we really meet Alanna for who she is... female. Alanna has been hiding her true identity from everyone. Forced by the rules only men can become knights, Alanna has secretly kept her female nature hidden from everyone but two friends Jon and George. In this novel, Alanna must face her greatest fears... falling in love and fighting her nemesis, Duke Roger. The suspense and romance make Alanna an excellent role model for any girl. She contains the vulnerability but strenghth that drives people to say females are an oxy-moron. In her weakness, Alanna triumphs over her enemies because her feminine nature many times keeps her from the prejudices, inability to open thinking and tendency towards segregation many of her male knight friends have. A truly enigmatic character, Alanna comes into her own in the In the Hand of the Goddess and this self-actualization process makes this book one of the best reads ever. I'm 25 and own this whole series and still read them when I'm in need of an inspiring female role model.

Published by Thriftbooks.com User , 21 years ago
It's been years since I read Pierce's series about Alanna, but I still return to them every so often and reread the entire set. In the Hand of the Goddess is probably the best of them all, I remember staying up incredibly late at 13 just to finish the book. The conflict between Alanna and Duke Roger, which builds throughout the book, is so interesting and a true example of adventure at its finest. Alanna's interaction with the Goddess and with magic is also exciting. And of course, the romantic parts of the book, very satisfying. =) This book is definitely my favorite of the series. I'm trying to find the whole series in 1st edition hardbacks, identical to the copies I read from the library years ago...anyone have any tips? The more recent cover art for the mass market paperbacks really doesn't do the story or the characters justice.

Read or you'll be sorry!!

Published by Thriftbooks.com User , 22 years ago
Dear Team of the world, I personally think that Tamora Pierce's In the Hand of the Goddess is a brilliant book. If you don't agree with me, here are some good reasons why I like it. This book has a great plot that just pulls you in and won't let you go. Some people who can't appreciate fantasy writing might say it's boring, but I assure you, it is by no means boring. There are no lengthy, dull introductions that give billions of little details no one would in their right mind would actually be interested in. This book is not taking ideas from anywhere I have seen. It's a new and unique idea. This book has a great plot. The first page, you find out a little about the character Alanna (introduction). Then she meets the "Great Mother Goddess" (narrative hook). There is a duel, and then a war. During the war, Alanna is taken prisoner (this is all the rising action) and is rescued by the prince, Jonathan. Then she goes to her friend's house, the friend is a woman who lives in the city. There she learns to act like a girl. That result is that she falls in love with Jonathan. She eventually graduates from the Prince's squire to a knight. She discovers that Jonathan's cousin, the popular Duke Roger, is killing the queen. She exposes him and they fight to the death (climax). After she wins, her real identity exposed, she rides of to the desert to "spend the rest of the winter being warm". That plot grabs you and holds you until you're done. This book gets to the point. It's not boring and it doesn't drone on and on in the beginning. As in paragraph two, there is a lot of action. Alanna meets the goddess and beats a boasting knight in the first two chapters! She is the squire to the prince of Tortall, next in line for the crown. There are no long descriptions in the beginning , you go right out and meet Alanna. You learn things as you go along with the girl on her adventures while disguised as a boy. This book has a lot of new and unique ideas. I found a review done by an unnamed fantasy fan, who said, "I liked it because it was a different kind of fantasy." Another reviewer, who gave her name as Ann said, "This book is an outstanding, heart lifting adventure that will make you want to read it again and again." I kept wishing that there were more books like Tamora's outstanding quartet, and since I read a lot, there can't be that many!! This book introduces new types of magic, new people, talking cats whom you only hear when it wants you to, and new gods. I say that those ideas are very unique from any I have read before. Naturally, there are some of you out there that would criticize this book. Susan Faust said, "The story in readable, romantic, robust, but in many ways pedestrian in it's vision." In English, the book is for the slow-minded. Actually, I would rate this book as very complexed. I had a job figuring out how the war was fought and where exactly Alanna was going. It is NOT for the slo
Copyright © 2020 Thriftbooks.com Terms of Use | Privacy Policy | Do Not Sell My Personal Information | Accessibility Statement
ThriftBooks® and the ThriftBooks® logo are registered trademarks of Thrift Books Global, LLC