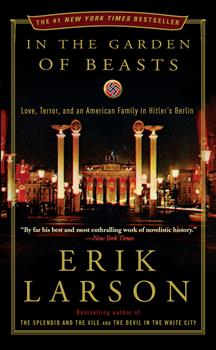 In the Garden of Beasts: Love, Terror, and an American Family in Hitler's Berlin

Erik Larson, New York Times bestselling author of Devil in the White City, delivers a remarkable story set during Hitler's rise to power. The time is 1933, the place, Berlin, when William E. Dodd becomes America's first ambassador to Hitler's Nazi Germany in a year that proved to be a turning point in history. A mild-mannered professor from Chicago, Dodd brings along his wife, son, and flamboyant daughter, Martha. At first Martha is entranced by the...

A great book and great read.

Published by Gregory , 2 years ago
I cannot imagine the work involved in researching this book. Larson has a true gift for bringing history alive. I have never read a historical work that was such a good read. Despite it's lenght, I read it in a day and a half.

Another great read by Larson.

Published by Daniel H. , 2 years ago
Great story with vivid detail. The ending started to time skip a bit more than I would have thought but all in all, a great perspective on the rise of the Third Reich.

Published by Dwomack , 3 years ago
This is the third book I have read by this author and every one was enlightening and enjoyable. He researches his subject thoroughly and that makes a nonfiction story a relatable read.

Witnesses to the Pre-war Nazi Germany

Published by Thriftbooks.com User , 4 years ago
FDR sent a Professor of History, who had obtained his PhD in Germany decades before, as U.S. Ambassador to Germany. He was particularly able to observe and understand what was happening in Hitler's Germany in the mid-1930s. He observed and reported on brutal treatment of Jews, the violent brown shirts in the streets, mistreatment of foreigners and preparations for war. Washington State Dept professionals considered him to be a non-diplomat who might disrupt US-German relations. The fools did not heed his reports and warnings. The ambassador's diary and his socially-active daughter provide detailed accounts of their many personal experiences. I have studied WW2 histories and biographies since my teens 50 years ago. This book is comprised of eyewitness accounts of 1930s Berlin. The ambassador kept a regular diary and his adult daughter had affairs with a Gestapo chief and a member of the Russian embassy.

In the Garden of Beasts...

Published by Thriftbooks.com User , 5 years ago
is an intimate and detailed look at the personal and professional lives of several major players in pre-WWII Berlin, who held positions both in, and outside of, government. While Berlin's residents, along with the rest of Germany, are being reoriented to Nazi rule by their new Chancellor, the world's diplomatic community, along with the international press, has a front row seat as the early days of Hitler's new official position of power play out. Mr Larson has given us an easily readable account where the inner-workings of diplomacy are revealed, and the story is conveyed, after exhaustive research, without personal interjection. I definately enjoyed this book, and recommend it for others interested in German/WWII history.
Trustpilot
Copyright © 2022 Thriftbooks.com Terms of Use | Privacy Policy | Do Not Sell or Share My Personal Information | Accessibility Statement
ThriftBooks® and the ThriftBooks® logo are registered trademarks of Thrift Books Global, LLC