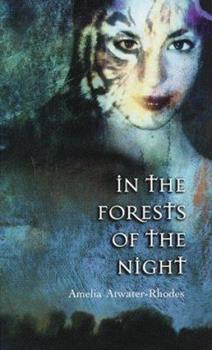 In the Forests of the Night (Den of Shadows)

(Book #1 in the Den of Shadows Series)

A 2002 Garden State Teen Book Award nomineeRisika is a vampire of great strength and power who still remembers her former life and the morals she held as a human. As a vampire she struggles to come to an understanding of her new life and tries to find a balance between the two.An Accelerated Reader? title

In the Forests of the Night

Published by Thriftbooks.com User , 15 years ago
In the Forests of the Night By: Amelia Atwater-Rhodes Reviewed by: A. Yamamoto Period: 1 In the Forests of the Night is a story about a 300-year-old vampire named Risika. The story begins when Risika is at the zoo, visiting her favorite animal, a tiger she named Tora. She returns home and revisits memories of 1701 when "Rachel still lived and Risika was not yet born." She was once a human who believed her twin brother may be "damned." He had met Ather, Risika's(Rachel at the time) blood mother, or the vampire who changed her and Aubrey, a vampire who Risika is out to get revenge for assisting Ather. Risika goes on to tell about how she finds Aubrey and fights him, ending up scarring him and taing his blood, making his mind open to her. She also finds her twin brother, Alexander, who has become a triste, or witch who hunts vampires and has poisonous blood. At the close, she admits that Rachel, who she had said often no longer existed, was still part of her. I enjoyed this book, not only because I love all of Amelia Atwater-Rhodes books and because it had to do with vampires, but because it had an incredible reality to it. Amelia has a talent for getting lost in the character who narrates, even the characters on the side, so much that it is very real to the reader. One of my favorite quotes was "Remeber this day, Aubrey. The wound you dealt long ago has returned to you. I'll be satisfied with your blood, though it doesn't even begin to replace the lives of Alexander and Tora. Now get out." This said clearly that Risika, though Aubrey offered his blood and now bears a scar identical to her own, still will never forgive him. Another line I liked was "I heard the faintest trace of an accent, though I could not place it. I had not been given much exposure to different languages." This was refering to Aubrey's accent. This was a favorite of mine because it allows your imagination to run wild with possibility. Any eurpoean accent is possible and just finding one to fit Aubrey's character is a wonderful game to play as you continue to read. I also liked when Risika is decribing her mother and Alexander. "Her hair had been even fairer than my brother's and mine, but our eyes were exactly the same color as her had been. An exotic honey gold, our eyes were dangerous in its uniqueness. Had my family not been so well accepted in the community, our eyes maight have singled us out for accusations of witchcraft." This was such a discriptive portion of the set up, it's almost impossible not to see these three people in your head. A mother and her twin children who all look almost completely alike. My favorite part of the book was when Risika meets Aubrey for the first time. He came as a "caller" for Rachel and gives her a black rose that cuts her. Her first thoughts of him were "rich" and "black eyed." The passage describes his outfit, saying that he "wore black breeches and a crimson shirt. The color was too bold for

Published by Thriftbooks.com User , 17 years ago
The story I would like to tell you about is called `In The Forests Of Night' by Amelia Atwater Rhodes. I loved this book because it was very intriguing. I always stopped at a part that left me hanging. I like how the author wrote this book. One chapter would be called NOW. That whole chapter would be about what's happening right now in the present to the main character. The next chapter would be what happened in the past, to the main character in the 1700s(between 1701-1705). This book was about a girl named Rachel. She is killed by a vampire, and turned into one. She is renamed Risika by her vampire-mother. Risika has to learn the vampire ways and how to deal with sucking blood out of humans in order to survive, and realizing that she is not Rachel anymore. She is Risika. 300 years after Rachel died and Risika moved in, Risika's only enemy is Aubrey, who is much stronger or is that just a figment of Risika's imagination. Could she be stronger than she thinks? This is a story about Rachel finding who she really is, and dealing with the fact that she is not Rachel anymore, she is Risika, Risika the vampire, Risika the killer, Risika the monster, and there's nothing she can do about it. This book is mostly for people who like to read fiction books about vampires, love, trust and tigers, should read this book. It was a quick read for me, and not difficult to understand.

Published by Thriftbooks.com User , 19 years ago
The young and intelligent Amelia Atwater-Rhodes has caught my eye in a way that a writer had not in many years. I have always been a vampire fan,(and i feel the need to reccomend all of the vampire books by Anne Rice and The Last Vampire series by Christopher Pike!) anyway, back to ms. atwater-rhodes. she writes in a convincing, descriptive, and captivating. She spins the story of Risika, a girl who had been forced into the dark world of the vampires by people that at the same time took away from her everything she had ever loved. She harbors a hate for Aubrey, the assistant of her maker, Ather. She then becomes one the most powerful vampires, and goes on a journey through the past, everything that Aubrey did to her until the present, until he makes one last transgression, and she challenges him.this book held my attention until the end, and is a great start for young Atwater-Rhodes. I look forward to her future books with much eagerness.

Goes beyond your conventional vampire

Published by Thriftbooks.com User , 20 years ago
This book blew my mind! I just picked it up and didn't put it down untill I finished it. It's a short read, which is okay. Amelia Atwater- Rhodes will definitely go far when she grows up more. When she writes about vampires, she went beyond the conventional, "Kill the vampire with garlic and crosses and call it a night". The character in her book, Risika, even says, "I do dislike the smell of garlic, but if your sense of smell was twenty times stronger than that of an average bloodhound, would you not dislike it as well?" Her writing goes from the present to the past to show how exactly her character, Risika, becomes a vampire. The book is basically about this character, Risika, trying to live her life as a vampire. She is 300 years old, but looks 17 (Which is pretty sweet). She has a constant rivalry against Aubrey, a male vampire that killed her brother in the 1700s when she was human. The rivalry goes to the next level when Risika decides to go against the vampire law of staying out of other vampire's territory. The whole story is well-written and extremely creative. I recommend this book to anyone who's interested in any mythology. This book is a must read.

Published by Thriftbooks.com User , 21 years ago
To think that a thirteen-year-old could write a novel to be published is astounding. But add to it the facts that it had wonderful dialogue, a dark atmosphere perfect for the genre, and great vocabulary unexpected of a teen, and you have a book far beyond astounding. IN THE FORESTS OF THE NIGHT is the short but well written story of Risika, a 300-year-old vampire who is still struggling against the battle between her human "morals" and her vampiric apathy. Then there is Aubrey, an even older and stronger vampire who threatens both Risika and her beloved tiger, Tora. IN THE FORESTS OF THE NIGHT alternates between the year 1701, when Risika was changed, and the present. The story is full of unwavering suspense, though some may say that the author's style is following the ways of veteran horror novelists like Anne Rice and Stephen King. But overall, an amazing debut from Amelia Atwater-Rhodes!
Copyright © 2020 Thriftbooks.com Terms of Use | Privacy Policy | Do Not Sell My Personal Information | Accessibility Statement
ThriftBooks® and the ThriftBooks® logo are registered trademarks of Thrift Books Global, LLC