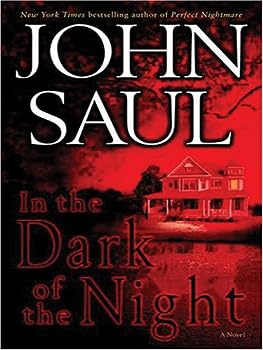 In the Dark of the Night [Large Print]

This description may be from another edition of this product. Summer vacation becomes a season in hell for an ordinary family who unwittingly stir something invisible, insidious, and insatiable from its secret slumber-unleashing a wave of horror only the darkest...

Published by Thriftbooks.com User , 13 years ago
I have read just about everything John Saul has written and this was as terrific as the others. I could not put it down and read it in a little less than three days. Highly recommended to all John Saul followers. S.L. Chessor author of Poodlums, Boogeymen and Booglers and My Tongue Fell Out. Poodlums, Boogeymen and Booglers: A Poetry Collection

The most gruesome yet...

Published by Thriftbooks.com User , 14 years ago
I have been a long time fan of John Saul. At points in this book, I found myself nautious. I definately was not in the mood to eat during points of the book. Definately a change of pace for John and I great read for any fan.

Published by Thriftbooks.com User , 14 years ago
John Saul has written a chilling tale about haunted houses and serial killers in this exciting novel. The story centers around Eric Brewster and his friends Kent Newell and Tad Sparks. Tad and Kent's families have been coming to Phantom Lake, Wisconsin for several summers. However, Eric has always been left behind in Evanston, Illinois. This year, however, Eric's family has finally decided to rent their own home on Phantom Lake. Now, the boys will be able to spend their summer together. There is a problem, however. Eric's Mother Merrill is a constant worry-wart, and she thinks the whole idea is bad, but after some reassuring from her husband Dan, the family, along with sister Marci, sets off for Wisconsin. The name of the house they are renting is called Pinecrest. It has sat empty for several years after the former owner, Dr. Darby, mysteriously disappeared. Some believed he committed suicide; others believe he was murdered. There's also a strange old hermit who lives in a run-down shack on the lake. He has a boat with a large cross on the front, and he's constantly rowing near Pinecrest, as if drawn there by some supernatural presence. Once the families are settled in, the boys begin to explore their surroundings. They encounter a couple of local teenagers; Adam Mosler, Ellis Langstrom, and Chris McIvens. Bad blood forms between the two groups of boys, and the tension will remain high between them throughout the course of the book. Most of the days are spent fishing, going into town, and exploring the grounds around Pinecrest. One particular area of interest to them is the carriage house. One day, the boys decide to explore the carriage house. They find a curious cache of items stored inside; a bladeless hacksaw, a shadeless lamp, a table with a missing leg, a headless axe handle, and surgical insturments in pristine condition. However, someone took the time to catalog each of these items in a neatly-organized ledger; complete with dates of acquisition and price paid for each item. The items have the making of a great adventure, demanding to be solved. However, the boys' devotion to learning about the objects soon turns into obsession, as they spend hours at a time inside the room trying to piece together the mystery. To make matters even more confusing, the boys begin to have a recurring nightmare about the objects, as if the objects are somehow speaking to the boys. As a series of strange events takes place, the boys wonder if they are the ones who caused these events. During their study, the boys learn that all of the materials contained within the room were once owned by famous serial killers; Jeffrey Dahmer, Jack the Ripper, Lizzie Borden. Meanwhile , the voices keep speaking to the boys, and the nightmares become more intense. One person has already been killed; did the boys do it, as their dreams suggest, or was it the power of the objects coming from the room? All of the events culminate on the Fourth of Ju

John Saul at his best

Published by Thriftbooks.com User , 15 years ago
This isn't "Second Child" but definitely a great book from John Saul and well worth buying..loved every minute of it! Jake

In The Dark of the Night

Published by Thriftbooks.com User , 15 years ago
Always a master of macbre, John Saul never disappoints.
Copyright © 2020 Thriftbooks.com Terms of Use | Privacy Policy | Do Not Sell My Personal Information | Accessibility Statement
ThriftBooks® and the ThriftBooks® logo are registered trademarks of Thrift Books Global, LLC