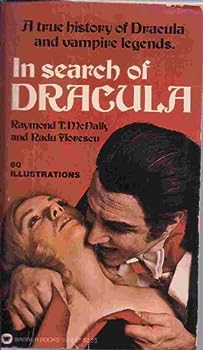 This description may be from another edition of this product. The true story behind the legend of Dracula - a biography of Prince Vlad of Transylvania, better known as Vlad the Impaler. This revised edition now includes entries from Bram Stoker's recently...

Published by Thriftbooks.com User , 15 years ago
The story of how Vlad Tepes became Dracula is much like the story of how Arturious the Dux Belorum became King Arthur. Indeed a careful study of both personages reveals much about the mythic processes that underly the retelling of history generally. In this book, the authors litterally ventured to ancient Wallachia to exhume the roots of the Dracula legend. In doing so they found the now often re-told story of a fifteen century prince Vlad Tepes who attempted through terror to vainly assert his rule over a waning kingdom against the backdrop of a divided Christendom and an overwhelming Moslem force. In the retelling of his story Tepes' thirst for blood became a litteral one and his presence came to be consigned that night which houses all our fears. Interestingly enough Tepes is reputed to have found final repose on an island monastery. In this way, Tepes has an Avalon of sorts where locals maintain he will arise again someday to reclaim their birthright of local hegenomy. As with all mythic process the Dracula story inevitably says more about us, the living, as we tell and re-tell it. Did they forge nations from their strength of will? As with Arthur: do their deeds inspire us still? As with Dracula: do their deeds terrify us still? Did they play their part in God's passion play...and save us from sin? To quote Ann Wroe from the concluding lines of her excellent book "Pilate, the Biography of an Invented Man." "Me? I did that, for you?"

Start Here for Your Search of the Real Dracula

Published by Thriftbooks.com User , 21 years ago
A nice blend of scholarship with fascination, this is the first book to look for the truth behind the fiction. Does a nice job not only of explaining where Bram Stoker got the bits and pieces he picked up to turn Vlad the Impaler into Count Dracula, but also puts the Wallachian Prince in historical perspective. There are more detailed biographies of Vlad out there, but this is really the book that opened the door and its writers are paricularly well suited to the task. If you only want to read one book about the real Dracula and his transformation into one of the major fictional characters of all time, this would be that book.

Lots and Lotsa Dracula Going On

Published by Thriftbooks.com User , 21 years ago
This is one entertaining volume, one I can refer back to time and time again. The writers give a very matter-of-fact account of the life and times of Vlad Tepes, occasionally laced with a bit of wry humor, and relate the legends that have grown around ye olde impaler. From there, they take us through Bram Stoker and his background, and on to the celluloid versions of Dracula, all without pausing for breath...and happily so. My favorite bits are the various legends about Prince Vlad told from several points of view, and how they compare with each other. Very revealing, and always entertaining. Great fun for vampire afficionados and "serious" devotees alike.

Published by Thriftbooks.com User , 22 years ago
I really love this book,I keep it by my bed at night.This book has more information on Vlad & vampires than most I have read. More than half the vampire books I have just barely graze Vlad (Dracula) & his history.This book contains a real detailed look into Vlad's life & Stoker's monster.

Published by Thriftbooks.com User , 23 years ago
If you were ever curious as to how and where the vampire stories began and how Bram Stoker conceived the idea for his book this is a must have. It depicts the events in the life of Vlad Teppes (Dracula), the son of Dracul and notorious leader of Transylvania and the bloodthirsty Eizabeth Bathory of a Hungarian aristrocratic family.
Copyright © 2020 Thriftbooks.com Terms of Use | Privacy Policy | Do Not Sell My Personal Information | Accessibility Statement
ThriftBooks® and the ThriftBooks® logo are registered trademarks of Thrift Books Global, LLC