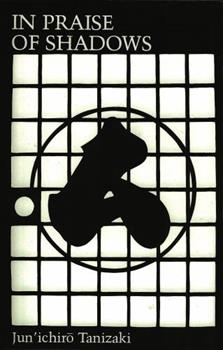 In Praise of Shadows

An essay on aesthetics by the Japanese novelist, this book explores architecture, jade, food, and even toilets, combining an acute sense of the use of space in buildings. The book also includes descriptions of laquerware under candlelight and women in the darkness of the house of pleasure.

Published by Thriftbooks.com User , 12 years ago
A cri-de-coeur against the mindless adoption of modern things. I'm sure Tanizaki would be the first one to admit the useful benefits of many modern inventions--he essentially says as much in this book itself--but that does not mean that we have to accept every modern thing without question. When you go to a lake in a valley for the purpose of moon viewing, having floods of spotlights on the lake does not enhance the experience; neither does having pop music blaring from speakers. Japanese laquerware was made for the effect it hase by candlelight--the flecks of gold glow out from amid the black laquer in an ethereal way. (The same, by the way, is true of church icons, and the stupidity of churches that use floods of electric lights is beyond expression.) A major problem in the discussion of modern Asian cultures is the way in which two distinct things--the conflict between modernity and tradition, and that between native culture and the West--are often treated as if they were the same thing. Since the West was largely the vehicle by which modernity was introduced to Japan and the rest of Asia, that is perhaps unavoidable. To have developed modernity on your own, as the west did, is quite different from having it thrust upon you from outside. Tanizaki generally does the same thing, but at least he is aware of the difference. His discussion of what modern inventions might have been like had Asians invented them--would the fountain pen perhaps have had a brush for a tip?--is interesting, if somewhat unconvincing. Surely, if a "fountain-pen-brush" had been useful or feasible, someone would have invented one by now! All in all, though, this book is by no means exclusively for people interested in Japan, although nobody interested in Japanese architecture or art should deny himself the pleasure of reading it. As an account of how the intrustion of modern stuff, with its glaring lights, loud music, and second-rate stuff feels to a man of sensibility, it is beyond compare. Yes, Tanazaki is a little outrageous sometimes and sometimes a little bizarre. You simply cannot say something original and meaningful if you do not allow yourself to express your thoughts and feelings freely without worrying about what others might think. That is the real evil of political correctness--under the mask of being a sort of sweet-hearted rejection of prejudice is is really the imposition of such shackles on the imagination and on free expression as can only impoverish art and thought. I am afraid that a Westerner of today cannot speak as freely of his own and of other cultures as Tanizaki did of his, and that if one did he wouldn't get published. Alas, we are the poorer for it.

In Praise of Shadows

Published by Thriftbooks.com User , 12 years ago
In Praise of Shadows is a wonderful, inspiring read. I ordered this for my husband after my son had it as required reading in college and loaned his copy to me. I thought I would give it a try even though Japanese design was not something I had ever been interested in. It was so enlightening. The writer instantly engages you. I could not put it down and of course finished in one evening as it is a pretty fast read. I read it again when my husbands copy came and loved it just as much the second time around. It pulls you into those places and you feel as if you have visited the shadows he so elegantly describes. Even if this subject is one you never thought of reading please please give it a try. It is musical.

Wabi Sabi - not to be confused with "wasabi"

Published by Thriftbooks.com User , 16 years ago
The Japanese have an aesthetic concept called "Wabi Sabi." This term consists of two words. "Wabi" literally means "poverty," but in the aesthetic context it stands for simplicity; "Sabi" is literally "solitude, loneliness," and for aesthetic purposes it means something like natural impermanence. Wabi Sabi encourages, as one observer put it, a profound feeling of inner melancholy, and an appreciation of quietly clear and calm, well-seasoned and refined simplicity. Andrew Juniper's "Wabi Sabi: The Japanese Art of Impermanence" summarizes the concept by saying that "the term wabi-sabi suggests such qualities as impermanence, humility, asymmetry, and imperfection. These underlying principles are diametrically opposed to those of their Western counterparts, whose values are rooted in the Hellenic worldview that values permanence, grandeur, symmetry, and perfection. ... Wabi-sabi is an intuitive appreciation of a transient beauty in the physical world that reflects the irreversible flow of life in the spiritual world. It is an understated beauty that exists in the modest, rustic, imperfect, or even decayed, an aesthetic sensibility that finds a melancholic beauty in the impermanence of all things." (pages 2 and 51) In order to appreciate Junichiro Tanizaki's 50-page pamphlet "In Praise of Shadows" it helps to keep the concept of Wabi Sabi in mind. While many people would object to Tanizaki's anti-modernist view of art (and call it "reactionary" or "nationalist"), it is in fact a contemporary take on an ancient aesthetic concept that favors obliqueness (shadows) over brightness, weathered naturalness over functional novelty, the crude over the polished, and - ultimately - irrationality over rationality. Tanizaki's essay contains good examples of Wabi Sabi, and a few peculiarly funny ones that reek of Zen humor: "one could with some justice claim that of all the elements of Japanese architecture, the toilet is the most aesthetic. Our forebears, making poetry of everything in their lives, transformed what by rights should be the most unsanitary room in the house into a place of unsurpassed elegance, replete with fond associations with the beauties of nature." (page 4) To a Western reader this sounds like unmitigated satire. But it is not. Tanizaki is serious about this stuff. In sum, I find "In Praise of Shadows" a very entertaining illustration of an important Japanese aesthetic concept, written by one of the most important Japanese authors of the 20th century. I bought the Leete's Island Books edition of the text, which I review here. Later I found that exactly the same translation is contained in Phillip Lopate's collection "The Art of the Personal Essay." It may be better value for money. Of course, aesthetics are always a matter of taste. Speaking of which, "wasabi" - if you recall the title of this review - is Japanese horseradish.

Rationale of the Senses

Published by Thriftbooks.com User , 23 years ago
I found this book originally 4 years ago for $1 in a discount bin at a tiny, cheesy bookstore in a mall. Just for kicks I bought it and was delighted by the chance of finding it. It is a little gem that describes one man's view of Japanese culture and design as compared with our sterile Western ways. As a (then) student of an Interior Design degree, I found it to be a worthwhile read.
Copyright © 2020 Thriftbooks.com Terms of Use | Privacy Policy | Do Not Sell My Personal Information | Accessibility Statement
ThriftBooks® and the ThriftBooks® logo are registered trademarks of Thrift Books Global, LLC