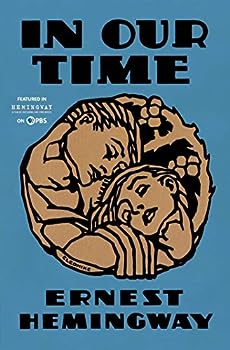 This description may be from another edition of this product. In Our Time has a curios history in that Earnest Hemingway released it in at least three different versions. The first edition (the 1924 Paris edition) was commissioned by Ezra Pound for Three...

Published by Bekky , 15 days ago
I have been trying to get a loan for a new car because I really needed one; my old car has really been frustrating my life... disappoints me almost every time. All my loan application fell through, because my credit was really bad and I had lots of Negatives from my past transactions years back. A well wisher recommended Metronet Credit Solution who had helped him in the past. I contacted them for help immediately and they promised to fix my credit ASAP. Within 5days they were able to raise my score by 227 points and also clear all the negative items on my report. I’ve got a low interest loan for my car thanks to them, it’s been a while and nothing is coming back, so I think the fix is permanent. I strongly recommend Metronet Credit Solution for any credit related issues. You can reach them via email at metronetcreditsolution@gmail.com

Published by Thriftbooks.com User , 14 years ago
"In Our Time," the first published work of fiction by Ernest Hemingway, reads like a sketchpad at times, notes toward a novel. In fact, the seeds for two of Hemingway's earliest novels, "The Sun Also Rises" and "A Farewell To Arms," can be found here, but "In Our Time" works better than either of those classics when it comes to showing why Hemingway mattered, and still does. Hemingway is a writer prized for his economic writing style, and he doesn't get more economical than here. The stories in this collection sometimes run just two or three pages, and are broken up by even briefer story nuggets that read like brushwork haikus. Included are three of Hemingway's most celebrated shorts, "Soldier's Home," "Indian Camp," and "Big Two-Hearted River," but while these and a couple of others ("The Battler" "My Old Man") are gripping enough read alone, they really come alive here in tandem with "In Our Time's" other stories and anecdotes. The mood of "In Our Time" seems more important than any message, and is certainly easier to discern. First published in 1925, "In Our Time" expresses a world-weariness typical of the generation that came home from the First World War, "The War To End All Wars," to find their glorious dreams and beliefs shattered. Cynicism was a newer thing in Hemingway's time, and harder for his generation to digest. Presenting himself in slightly fictionalized form as one Nick Adams, Hemingway looks backward to moments of nausea in his youth, bitter breakups and parental failures, before dealing with how the war itself left him shattered. Sometimes the lens of the book moves to characters other than Nick, but it never leaves aside that spirit of disillusion and loss. "He did not want any consequences," he writes of Krebs, the protagonist of "Soldier's Home." "He did not want any consequences ever again." Hemingway writes beautifully and sparingly throughout "In Our Time," showing generations of writers how much more effective an idea can be when a writer leaves it to a reader to work it out. No story better illustrates his singular command than "Big Two-Hearted River," an elegy and grace note in two parts for all that comes before, as Nick recaptures a sense of peace fishing for trout on a river. It's one of the longest stories, and may seem aimless to a first-time reader as it focuses on the nitty-gritty of Nick's routine, but the more you read it, the more drawn in you become, until you feel like you are on that river with Nick, plucking black grasshoppers off the tall grass. People say Frank Sinatra did the first concept album with "In The Wee Small Hours," but it seems to me Hemingway had him beat by some 30 years with these tone poems of stunning narrative craft.

One Of The Best Books I've Ever Read

Published by Thriftbooks.com User , 16 years ago
This is quite nearly a perfect collection of short stories. Hemingway has enamored me, because of this collection: i've never read anything that is written in this way. I've picked up four or five others at this point, that I have yet to read but hopefully soon will. These stories add up to a very amazing collection of ideas, themes, and moods. Very good.

Published by Thriftbooks.com User , 21 years ago
These short pages contain simply (but less simply than some readers realize) some of the best short stories by an American writer in the entire twentieth century. Hemingway is certainly lauded enough by high-minded literary types, but it would be a mistake to assume that those are the only people that can enjoy him. It is tough to get a handle on what he is doing in this book, particularly because of the interchapers (which are NOT lead-ins to the stories following them, but a separate bit of impressionist writing of their own), but as in all great writing, the point is to make you ask yourself questions, not answer them for you. My personal favorite from this book (and maybe of any book by anybody) is "Soldier's Home" Hemingway's style, which is often criticized for being "too simple", thus ignorant, is to leave the most important details unsaid, letting the reader create most of the image in his or her mind. When in "Soldier's Home" Krebs' mother says "There can be no idle hands in God's Kingdom" Hemingway writes Krebs' reply as simply "I'm not in His kingdom." No description of his voice, no laying of scene, nothing but that pure powerful statement, which would have been ruined by a long dramatic monologue on the horrors of war. If you enter this book with an open mind, Hemingway won't disappoint. And you'll have plenty to argue about with your high-minded literary friends.

Published by Thriftbooks.com User , 22 years ago
This is by far my favorite Hemingway. To the newcomer: please don't be fooled by the simple style and the often elliptical exposition. There is so much more here than is evident on a first reading. It takes a while to discover the complexity of Hemingway's themes and the emotional strings he pulls because his style is so spare, strong, and perfect. Like small, meticulously arranged blocks, with brilliant vignettes between them as mortar, he builds a stirring and often frightening image of the twentieth century. Everything is here--young love, political violence, adolescent confusion, social displacement, racial conflict, industrial hegemony and decline, every sort of relationship fissure.Sometimes his genuis is almost eerie--read "Soldier's Home," and try to analyse how such basic words and sentences can weave such a poignant, aching emotional web. His work had an almost magical presence in those early years, before egotism and the media made him self-conscious.Even if you are familiar with his more celebrated novels, read this collection and you will be overwhelmed by the beauty, power, and honesty of Hemingway at his best.

The collecition of stories by a master of prose

Published by Thriftbooks.com User , 23 years ago
This is the high water mark for an excelent writer of prose. He captures the cold reality of the world in eloquent detail, and bears his sole in every story. This is a man who knows how to leave his mark in literary history.

In our Time Mentions in Our Blog