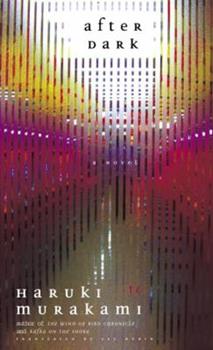 This description may be from another edition of this product. In After Dark --a gripping novel of late night encounters--Murakami's trademark humor and psychological insight are distilled with an extraordinary, harmonious mastery. Nineteen-year-old Mari is...

Published by Meg , 7 months ago
Just random senseless stories with no closure. Initially I thought I was reading a Twilight Zone like story, but it will leave you hanging feeling like you just wasted a couple of hours.

I loved every page

Published by Blue , 8 months ago
This book was so simple but it really wraps you up and takes you into the story so easily. I finished it in a day. It felt nostalgic and had hints of magical realism that I loved. There’s a bit of mystery and romance. It’s like everything I would want in a book. I highly recommend to anyone who is into those topics or just wanting a bit of an escape, because it does feel like you are in this book when you are reading it.

Published by Thriftbooks.com User , 11 years ago
After reading through some of the reviews, i think it would be safe to advise people that if they like stories that are concrete, explained, & make sense, they maybe shouldn't read After Dark. Any plot is very loose, & there are parts that some may feel are pointless. Personally, i liked this book quite a lot, maybe in part because of its strangeness. Not everything is resolved; some things are simply introduced or hinted at. Things aren't tied up in a neat little bow; not everything makes perfect sense. But instead of being agitated by this kind of experimental style, i found it engaging & interesting, & it draws a closer parallel to life. After Dark seems more like a time frame-- starting from 11:56 PM & moving on from there-- & watching people pass through it. The reader finds out some things about them, but not everything about everyone is given away, & the reader parts ways with the characters without knowing where things will take them. It's more like a long observation that's allowed to follow people throughout the night; there is no big climax at the end. Some people, it seems, also feel that the parts with Eri are pointless, maybe in large part because they are so strange & nebulous & there is no explanation, ultimately, for what takes place with her. Regardless, i would say they still have their place in the story & lend to its late night kind of atmosphere; to remove them would hurt the overall story considerably. Overall, as the first book of Murakami's that i have read, i can say that i'm not disappointed. I really liked After Dark, but i would caution those who like more "normal" books.

Published by Thriftbooks.com User , 13 years ago
Hardly anything happens in this slim novel, which is set entirely over one night in Tokyo. But the wisp of a plot is enough. I enjoyed this book primarily because of the dream-like atmosphere that Murakami creates. His spare style has an almost hallucinogenic effect. In lesser hands I might have been frustrated by some of the surrealism, but I floated serenely through Murakami's Tokyo night in one sitting. Excellent!

Published by Thriftbooks.com User , 14 years ago
Thus goes Takahashi's motto in life. In "After Dark", spanning a single night in people's lives, Takahashi and others form a web of stories of people who have their problems and their worries. From Mari, trying to deal with a reality that she can't fathom, to her sister Eri, sleeping herself into a blissful nothingness sheltered from reality, the characters are real and messy. Interwoven through it all is Murakami's unique weaving of reality and the ethereal nothingness that lurks just beneath the surface. This would have to be one of Murakami's more accessible novels, and one that leaves a somewhat pleasantly disturbing after glow. I thoroughly enjoyed this novel to the very last page. I had intended to read it just while commuting, but I got absorbed into it and had to finish it. It is one of those books, I think. For people who have not read Murakami before, I think this is the ideal novel to start with. It is not too surreal for people and it is has a depth of perception that is still able to be shared with readers. It is a great book and one that I will be thinking about for some time.

One of Murakami's best books in awhile.

Published by Thriftbooks.com User , 14 years ago
It's so hard to live up to your early masterworks. "Wind up Bird Chronicle" was a brilliancy, and many of his books that came afterwards while still fun to read where always a bit of a let down in comparison. With "After Dark" Murakami returns to his masterful form. This book is short but each line is near perfect--there is no literary flab. Murakami's writing has been honed to a fine edge. The characters are recognizably Murakami, but still unique and wonderful and you not only want to spend the night in their company, you want to follow them through the upcoming days as well. Alas, like the night in the book, it ends too soon. Yet we feel we have stayed up with them throughout and when its over an ethereal barb remains in the reader. I look forward to his next book and I'm glad to see Murakami back in top form.

Riffing in the Wee Small Hours

Published by Thriftbooks.com User , 14 years ago
Books don't come with sound tracks, but if they did, there's no doubt that trombonist Curtis Fuller's breathy opening notes in "Five Spot After Dark" would be the perfect entree to Haruki Murakami's AFTER DARK. Low-key piano, soft drums and high hat played almost entirely with brushes, and a haunting solo trombone create the perfect noir accompaniment for Murakami's seven-hour, overnight jaunt through a Tokyo of lost and lonely souls. It is a Tokyo that seems about as un-Japanese as anyone could possibly make it - with a small leap of the reader's imagination, this story could have taken place just as easily in New York, London, Paris, or any other large, modern city. The story line of AFTER DARK hardly seems important. Suffice to say that the author introduces a small cast of characters who suffer the loneliness of urban nighttime existence and yet manage to interact witth and rely upon one another in unpredictable ways. There's Tetsuya Takahashi, the trombone-playing band member out for the last time for an all-night practice session with his band before hoping to return to school to study law. Then there's Mari Asai (an anagram for Asia?), also a college-age student of Chinese language with her textbook in an all-night Denny's, sitting quietly alone until joined by Takahashi. And there's Kaoru, former professional wrestler and now part of the clean-up crew at a seedy love hotel named Alphaville. And Guo Dongli, a Chinese prostitute who gets beaten up in the Alphaville and is assisted by Kaoru with Mari acting as translator. And another night bird, the programmer Shirakawa, who toils away fixing his company's software in an otherwise empty office and who also happens to be Guo Dongli's assailant. Finally, there's Eri Asai, Mari's stunningly beautiful older sister who has been asleep, but not in a coma, for two months. Chapters of AFTER DARK that follow the night's events (each is labeled by the hour and minute at which it begins) are interspersed with Twilight Zonish scenes of Eri Asai asleep in her room. We watch her as though we are a camera slowly panning the room, reducing us in Murakami's parlance to a mere point of view. Eri's TV mysteriously turns itself on, gradually revealing another watcher, the Man with No Face. Over the course of the night, Eri is magically pulled into the room inside the television and then released, but not before revealing an inexplicable connection to the prostitute-beating programmer Shirakawa and finally offering a sense of resolution between the estranged sisters Mari and Eri. In a book riddled with weird events and odd connections, a major clue has to come from the love hotel, Alphaville. Jean-Luc Godards 1965 film of the same name was an avant garde masterpiece, a work of futruristic science fiction shot without special effects in the back streets of Paris. In Godard's future, Alphaville is run with ruthlessly efficient logic by a massive Alpha 60 computer. Pictures of the machine's inventor, Vonbrau
Copyright © 2020 Thriftbooks.com Terms of Use | Privacy Policy | Do Not Sell My Personal Information | Accessibility Statement
ThriftBooks® and the ThriftBooks® logo are registered trademarks of Thrift Books Global, LLC