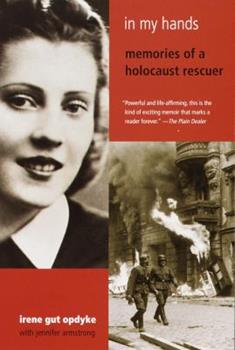 In My Hands: Memories of a Holocaust Rescuer

In My Hands began as one non-Jew's challenge to any who would deny the Holocaust. Much like The Diary of Anne Frank , it has become a profound document of an individual's heroism in the face of the greatest evil mankind has known. In the fall of 1939 the Nazis invaded Irene Gut's beloved Poland, ending her training as a nurse and thrusting the sixteen-year-old Catholic girl into a world of degradation that somehow gave her the strength to accomplish...

Published by Karen A , 2 years ago
Unsuspecting families caught in the horrible events in Poland and surrounding countries in the late 1930’s had to fend for themselves to survive, and some risked their fragile advantage to try to save those who were in even greater danger. Irene is an inspiration by chance, an example of true bravery.

An Inspiring Story of Courage

Published by Thriftbooks.com User , 14 years ago
Irene Gut Opdyke is one of those cherished few to have been honored by the State of Israel as one of the "Righteous Among the Nations" and even further recognized by the United States Holocaust Musuem as a permanent contributor to the study of the Holocaust. "Into the Flames" is her story. The author is Catholic and Polish. Her story begins when she is but 17 years old and her native land of Poland is invaded first by the Germans and then by the Russians. She becomes involved with the Polish underground but is soon captured, and brutalized, by a group of Russian soldiers. After recuperating in a hospital, she eventually ends up in German occupied Poland and begins working for a German Major. There, she is horrified to discover that the Germans are mistreating the Jewish people, e.g., keeping them enclosed in ghettos and depriving them of food. She even witnesses first-hand the slaughter of some Jews. She decides that she must do something and begins by sneaking food through a fence into the ghetto. Later, she helps in hiding some Jews in a forest outside town. Next, she hides a dozen Jews in the basement of the German Major's own house! These Jews are discovered by the Major, who elicits an accomodation with the author for keeping them in his house: If she stays with him and becomes his willing lover, he will not report her or the Jews. Although repulsed by the Major, she agrees to his terms and for months continues this masquerade until the Germans, including the Major, are forced to evacuate due to oncoming Russian forces. In the evacuation, she escapes from the Major and rejoins the partisan underground, leaving the 12 Jews under the care of another, as she must, and they are kept safe until all the Germans are gone. She is later arrested by the Soviets as a partisan fighter but escapes from them as well. She takes on a Jewish name, flees to Germany, and volunteers to fight for the State of Israel but is turned down for health reasons. She finally ends up in America. The author's story is one of incredible courage, pluck, and determination. It is a must read.

Published by Thriftbooks.com User , 20 years ago
Set in the howling abyss of the Holocaust, Irene Gut Opdyke's stirring memoir, "In My Hands," serves as a beacon of light when the world's moral compass pointed to darkness. When the history of the twentieth century is fully comprehended, I have little doubt that this remarkable woman will emerge as one of the most signficant models of honor, decency, morality and personal responsibility. Ripped from her family and her own personal innocence, Irene Gut never flinched from her private outrage over the evil of genocide; instead, despite the most profound personal outrages committed against her (cruelties which would cause most of us to withdraw from social contact and the ability to feel tenderness), Irene elected to become a savior, personally shouldering the enormous responsibility of hiding Jews, the intended victims of Nazi brutality.Told in a quiet, unassuming voice, "In My Hands" chronicles Irene's "lilac time," a near idyllic childhood spent in the embrace of a loving, supportive family. World War II shattered not only her family's coherence, but it irrevocably altered Irene's perception of humanity. Never wavering in her astounding faith, Irene refused fatalism as a personal philosophy. Recovering from the most brutal sexual assault imaginable, Irene observes Nazi depradations against Polish Jewry and resolves to stand against it. Her defiance began, as she reminds us, with "small steps." Smuggling food through a fence into a ghetto evolves into secreting Jews in a forest. This action emboldens Irene to risk both personal autonomy and safety into actually hiding twelve Jews in the basement of a German major's villa. Never seeking praise or affirmation for her work, cut off from both friends and family, Irene Gut operated in a moral universe solely of her own doing. Her moral code, "I must take the right path, or I would no longer be myself," stands as an affirmation of what it means to be human -- even more crucial to the understanding of this noble human being is that so few, so very few people adopted her tenacious will to assist the brutalized.Capably assisted by the children's author Jennifer Armstrong, Irene Gut Opdyke reaches the widest audience with "In My Hands." Recognized by Israel as one of the "Righteous Among the Nations" and honored by our United States Holocaust Memorial Museum as a permanent contributor to the study of the Holocaust, Irene Gut Opdyke stands as a moral model. Her wrenching but deeply instructive memoir tells much more than a life's story; it educates our heart and inspires moral vision.

A True "Profile of Courage"

Published by Thriftbooks.com User , 21 years ago
I am so grateful for having read this book. It was deeply moving. I am a seventeen year old girl, as Irene was when the war began, and I cannot even imagine having to experience all of things she did....being raped, a mistress, etc. I admire this woman so much, her courage and determination are one in a billion. It's incomprehensible to know what she went through during those dreadful years, yet through it all her faith is what helped her to survive. I will never forget this book for as long as live...I've read so many books, and I have to admit that I think this one has truly moved me the most. I've read many Holocaust stories as well, but this had a profound effect on me. Please read this book--you'll gain not only a better insight of World War II and the Holocaust, but also how to appreciate life more and realize how much you take for granted.

An extraordinary display of heroism and courage in adversity

Published by Thriftbooks.com User , 22 years ago
This short book is one of the more remarkable books on the Holocaust I have ever read. It details the life of one seemingly ordinary nursing student, thrown into adversity, who demonstrates extraordinary courage and heroism and humanity responding to the needs of a group of Jewish prisoners in her care. Against extraordinary odds, she manages to harbor the group in the basement of a house occupied by a Wehrmacht officer for whom she serves as housekeeper. The book is an easy read, written in a warm and direct style, very personal, and at the same time very intense. Reading this book helps answer some of the eternal questions about the survival of humanity in Nazi-occupied Europe, and is a must-read for students of the subject.

In My Hands: Memories of a Holocaust Rescuer Mentions in Our Blog 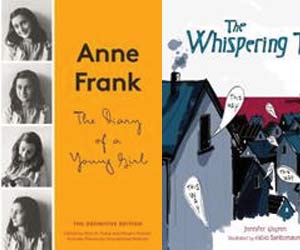