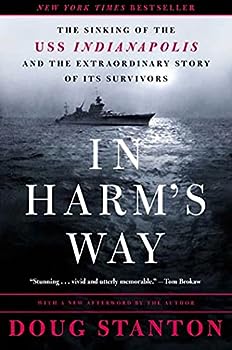 In Harm's Way: The Sinking of the U.S.S. Indianapolis and the Extraordinary Story of Its Survivors

This description may be from another edition of this product. A harrowing, adrenaline-charged account of America's worst naval disaster -- and of the heroism of the men who, against all odds, survived.On July 30, 1945, the USS Indianapolis was torpedoed in the...

Published by Bookworm , 5 months ago
This is a truly horrific story of America's brave men in the second world war. I say "horrific" because the account is terrible beyond belief; but it's a must read. I couldn't put the book down. The strength these men had to survive what they did and the strong will to live, coupled with the bravery and love for their fellow man really proves the iron which they were made of. God bless each and every sailor who died in this monumental adventure. May they rest in peace.

A Terrifying History of an Avoidable Loss

Published by Thriftbooks.com User , 20 years ago
Perhaps you remember the harrowing story told by Captain Quint in the movie _Jaws_, explaining to his fellow shark hunters about how after his ship, the _USS Indianapolis_ was torpedoed, the men drifted for days and were picked off by sharks. Quint's tale is accurate, but it is only part of the terror within the _Indy_'s story. The whole is laid out in _In Harm's Way: The Sinking of the USS Indianapolis and the Extraordinary Story of Its Survivors_ (Henry Holt) by Doug Stanton, as spellbinding and frightening a book about the horrors of war as you are likely to read._Indy_ had had the imposing job of bringing the bomb "Little Boy" from San Francisco to Tinaian Island, near Guam, from where it could be sent to Hiroshima. After leaving the bomb in Tinaian, the ship was routed to Leyte in the Philippines, ready to take part in any mopping up action; but on 30 July it was torpedoed by the Japanese submarine I-58, and sank in twelve minutes. Astonishingly, for four days the Navy had no idea the ship was lost. _In Harm's Way_ details a surprising number of administrative errors and missed chances that would have saved most of the crew, but when the _Indy_ went down, no one but the survivors knew what had happened, and no one on land knew to worry about them.1,196 men were on the ship when it was struck, and about 300 of them died immediately from the two torpedoes. Of the remaining 900, only 317 were eventually rescued. Sharks had, indeed, taken some of the rest, maybe about 200 during the four days the men floated in the Pacific. The fuel oil blinded and poisoned some, and some just went mad with blood chemistry imbalances and killed themselves and each other. The surviving doctor tried to minister to the sailors, but all he could really do was collect the dog tags of the dead, and when those proved so heavy that his exhaustion wouldn't let him carry them any more, he let them sink.A patrol plane on another mission finally saw some of the survivors, and the belated, but heroic rescue took place. Captain McVay became the first captain in US history to be court-martialed for losing his ship as an act of war. It is clear that there was nothing McVay could have done to save his ship, but he was found guilty. The survivors, however, rallied behind McVay, a truly tragic figure, who was worried when he attended the first survivor's reunion in 1960; it was clear that he was respected and even loved by those who had served under him. Some members of families of dead sailors remembered differently, however, and McVay got hate mail from them. This was surely one of the reasons he shot himself in 1965. His crew has since tried to get his court-martial erased. Though his story is the backbone of this engrossing and terrifying book, _In Harm's Way_ contains satisfying doses of history and of heroics under unimaginable stress. It is a fine addition to the current flow of volumes on World War II.

Published by Thriftbooks.com User , 20 years ago
In contrast to the strip of glassy smooth water that is a ship's wake, the sinking of the Indianapolis has left nothing behind but roiling emotions. Still easily brought to the surface after all these years - anger at the navy being the most common expression, and as IN HARM'S WAY shows - it is most appropriate. The 1,196 men who went into the water on the morning of July 30, 1945 were abandoned to their fate by the navy. They were left adrift for 5 days, eventually being spotted and rescued by chance; by this time only 321 were left alive, four of whom died shortly thereafter. The navy then rubbed salt into this open wound by blaming one of the survivors - Captain Charles McVay - for "hazarding" his ship.This book is much more a story of men battling the sea and finding the courage to survive than it is a history of the war. As such it is less about the Indianapolis and its mission but more to do with personal drama of the men. It succeeds by drawing on the stories of three survivors - Captain McVay, ship's doctor Lewis Haynes, and Private Giles McCoy. The facts of the tragedy only put the achievement of survival into its proper perspective.> The ship was sunk by a torpedo from Japanese submarine I-58; the explosion killing about 300 of the crew instantly; the wounded as well as the uninjured jumped into the sea. Escaping a fiery death only brought on other dangers "from dozens of probing bacteria and organisms which, as the men drifted, began gnawing at their flesh. The salt water itself was a caustic brew...not unlike immersion in a mild acid bath."<p>> Perhaps as many as 200 men were eaten alive by sharks. Morning and evening were the sharks feeding times; twice a day for five days the men were preyed on. <p>> Many faced hypothermia and mental and physical exhaustion; for others suffering was in the form of hallucinations and delirium which caused them to swim away to an imaginary rescue or giving up, they drank down sea water which only guaranteed an agonizing death.<p>The author puts it best when he says what this tragedy means to the survivors; "the disaster of the Indy is their My Lai massacre or Watergate, a touchstone moment of historic disappointment: the navy put them in harm's way, hundreds of men died violently, and then the government refused to acknowledge its culpability." Perhaps the only good that this tragedy has produced is that it has spurred young writers like Doug Stanton to preserve these stories of human courage before all the remaining survivors slip under the waves of time. The author at 39 is a little younger than I am, but by writing and by reading these books, we, as a generation can honor the men who fought, died, and survived WWII.<p>The only glory in war is surviving.<p>"All the glory of the world would be buried in oblivion, unless God had provided mortals with the remedy of books." (Bishop Richard De Bury)

Published by Thriftbooks.com User , 20 years ago
You don't have to be a history buff to be fascinated by Doug Stanton's compelling chronicle of the sinking of the USS Indianapolis, the worst catastrophe in the history of the US Navy. Shortly after delivering the atomic bomb that was dropped on Hiroshima and hastened the end of World War II, the USS Indianapolis was torpedoed by a Japanese submarine. The ship sank within minutes, leaving approximately 900 crewmen stranded at sea. Incredibly, the ship's brief distress call was ignored and the Navy did not notice that the ship was missing for over 4 days. Most of the surving crewmen were badly injured and virtually without survival equipment or even basic clothing. After battling vicious shark attacks, dehydration, exposure and exhaustion for days, 321 men were eventually rescued. Stanton's masterful recounting of this epic tale is a worthy testimonial to these courageous surviors. He adroitly combines the historical record with the powerful and poignant personal stories of key survivors. The result is a vivid, forceful book that you will long remember.
Copyright © 2020 Thriftbooks.com Terms of Use | Privacy Policy | Do Not Sell My Personal Information | Accessibility Statement
ThriftBooks® and the ThriftBooks® logo are registered trademarks of Thrift Books Global, LLC