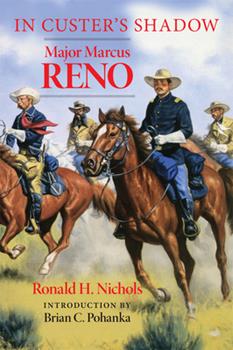 During the Battle of the Little Big Horn, five entire companies of the 7th Cavalry, including their leader, George Armstrong Custer, were lost. For years the shadow of blame for the defeat has been cast upon Custer. What role did his subordinates play in the battle? Did they contribute to the Custer failure, or was he the only one to blame? In Custer's Shadow presents the complex life of Major Marcus Reno, Custer's second-in-command. Employing photographs...

A Balanced View of Reno

Published by Thriftbooks.com User , 14 years ago
Ronald H. Nichols brings students of the Little Big Horn a valuable source of information about Custer's second in command, Major Marcus Albert Reno. An ex Marine with a gift for writing, Nichols spent more than two decades studying Reno and the battle which both ensured his immortality and his controversial role as scapegoat for Custer's catastrophic defeat. Nichols book succeeds in bringing Reno out of Custer's shadow and presenting him in an objective, thoroughly researched book. Nichols knows his man and the ground upon which he fought. The value of IN CUSTER'S SHADOW is enhanced by Brian Pohanka's thoughtful introduction. The books published about this battle in a remote corner of Montana would fill a good sized library and you'd expect a lot of books about Reno. There aren't. The last biography of Reno was published more than three decades ago. Nichols' excellent book meets the need for a biolgraphy which takes into account the recent milestones in the study of this fascinating battle. Older treatments of the Little Big Horn usually take the position that Custer lost the battle because his subordinates, especially Reno, let him down. They assume that the battle was Custer's to win. Nichols takes a less ethnocentric, more objective approach suggesting that the Sioux and Northern Cheyenne warriors won the battle rather than seeking scapegoats to explain Custer's defeat. His underlying thesis resembles He Dog's explanation of the battle to General Hugh L. Scott in 1919. Scott asked the famous Oglala warrior what would have happened if Custer and Reno had stayed together and charged into the village. Without hesitation, He Dog answered that he and his warriors would have killed them all no matter what they did. The warriors were many and the soldiers too few. Indeed, Nichols points out that Reno dismounted his troopers and formed them up into a skirmish line about 500 yards from a defilade formed by a change in the course of the Little Big Horn River which concealed more than 500 warriors. Continuing his charge would have placed Reno in the same desperate position Fetterman found himself in, cut-off and badly outnumbered with lifespans measured in minutes. And, it probably wouldn't have saved Custer and his command. I like OUT OF CUSTER'S SHADOW and gave it five stars. If you're interested in the Little Big Horn, U.S. military history, the Indian Wars, the American West or the Seventh Cavalry, you'll enjoy Ron Nichols' book.

Great Detail on Reno the Man:A Psychological View would Help

Published by Thriftbooks.com User , 21 years ago
Very interesting and great detail on the life of Marcus Reno from his roots where he lost his father and mother at a young age; however, through work and dedication ended up at West Point. There may be more than irony that in his West Point years, Reno had great difficulty with demerits and ended up graduating after two suspension and 6 years at West Point. Although no severe incidents occur at West Point they were enough to suspend him twice as is much the case in his post Little Big Horn (LBH) years resulting in a final court martial.The impact of losing his wife and mother of his child while escorting a survey party with a portion of the 7th in the area of North Dakota and NOT being able to return to his family had to have had a severe impact on Reno. Particularly after his post LBH episode, Reno seemed to have trouble adjusting to bachelorhood.Nichols covers the LBH well except in cases where he buys completely that Benteen was to scout to the left to infinity as Benteen reported and where he speaks in brief detail on Reno's retreat from the LBH valley. Besides vacating his position, the issue of whether all his men were notified of the sudden retreat seems a little weak (company commanders were alleged to be at fault) and more discussion on the lack of a rear guard in the retreat is critical but lacking. In the Reno Court of Inquiry, Lt. Varnum, Dr. Porter, Girard and George Herendeen describe the retreat termed a "charge" by Reno as an uncontrolled rout. Perhaps there was no way to stop the men for a rear guard but that does not seem to be explored in great detail. There also is the controversy surrounding lack of ammunition as being a need to retreat; however, testimony by witnesses on Reno-Benteen Hill note that Reno's battalion took little from the ammo boxes provided by the pack train. Although not ventured by the author, the effect of having the scout Bloody Knifes brains splattered about his face may have caused Reno's abrupt retreat without a rear guard. I say abrupt since over 20 plus men were left behind, some killed and the majority hiding in the brush until they could make it across when the Sioux shifted to Custer's field. This book is very interesting and a final chapter by a psychologist analyzing some of Reno's writings (such as his threatening letter to Former President Ruthorford Hayes) and history may have revealed something more about a man haunted by the LBH. A retired Marine Colonel told me recently that the mere suggestion of cowardice even unproved is severely damaging to a military man's career. Perhaps the same occurred to Reno.

Published by Thriftbooks.com User , 21 years ago
I've heard this story all my life, but was unsure just what the truth of it was about our Marcus. I've read a part of the book Son of the Morning Star, which is about Custer's Last Stand. My Dad said that some people who were to have died in this famous battle, actually did not die. Reason being that they hid under an overhang of roots in a creek and were not found by the Natives.Anyway, I have read your review, and its good enough for me that I should buy this book. Your review on the book tells me that my hunch was correct, that our Marcus was following orders.Jon, I'd really enjoy corresponding with you, as a relative. I'm currectly searching my genealogy and if it would be ok, I'd like to contact you. My email address is plbritton@hotmail.com (the "l" is "l" as in "lamb".Thanks, Peggy BrittonPS. For anybody who wants a wonderful account of Marcus, I'd recommend this book, on Jon R Reno's reviw.

Published by Thriftbooks.com User , 21 years ago
I have actually grown up listening to stories from my Grandfather that we were decendants of a great military leader who graduated from West Point and served valiantly during the Civil War and who LISTENED and OBEYED direct orders from Custer, even though he did not agree with what Custer had decided during the Battle of Little Big Horn. A decision that Custer made himself and ultimatley paid the price for. I give strong praise to Ron Nichols for telling a VERY compelling story about Custer's second in charge ( I've been told from my father that Marcus Reno is my great great great uncle ) and the controversy that surrounded him after the battle. Mr. Nichols proves what my family knew all along - That Major Reno DID follow the direct orders from Custer and had he not conducted himself during that treacherous battle the way he did- he would have lost every man in his company just as Custer did. It was a shame the way this country treated perhaps the bravest soldier in the aftermath of the Battle. In reading this book, I found myself furious and wishing I could have lived during this time to defend my family ( obviously I have some bias ). Thank you Mr. Nichols for the devotion you made in your life to research and bring to life the true story surrounding a great military hero. -Jon R. Reno
Trustpilot
Copyright © 2022 Thriftbooks.com Terms of Use | Privacy Policy | Do Not Sell My Personal Information | Accessibility Statement
ThriftBooks® and the ThriftBooks® logo are registered trademarks of Thrift Books Global, LLC