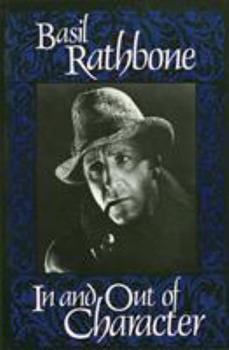 In and Out of Character

"Basil Rathbone's book about himself...is better written than most books by or about actors and is more intellectually vigorous...Sherlock Holmes fans will be much interested in his remarks on the character with whom he has been so closely identified." -Library Journal "Quite naturally full of memories, full of names, full of glimpses of stars of stage and screen of yesterday and today." -New York Times Book Review

Published by Thriftbooks.com User , 15 years ago
Unlike many more modern "autobiographies" that are written "with" such and such an author that "helps" the celebrity write his or her book, it appears that this was written pretty much solo by Rathbone himself. And it is superbly written ... in fact, some readers may find the grammar and language somewhat different than books written more recently. And that is part of it's greatness; I could practically 'see' Mr. Rathbone speaking the words as I read the book. The author assumes that the reader will be familiar with some Shakespearian plays and roles as he describes when and why he took on such parts in plays ... I found that to be just a bit vague because of my unfamiliarity with Shakespeare, but that does not detract much from my enjoyment of the book. I would have liked to see more details of his friendship with some better known Hollywood stars, especially Nigel Bruce, whose work I admired. In fact, Bruce gets hardly any mention in the book, and considering that it was written in the early 60's, I'm surprised the Bruce's death (in 1953, I think) is not mentioned at all. This may be due to Rathbone's eventual disenchantment with the Holmes character in general, but still, it's a shame that there isn't a bit more about the Holmes years and the actors that made them. I was tempted to give the book 4 stars because of these omissions, but hey: It's Rathbone's story to tell, and if he wanted to say little about these events, I can respect that. Still, it's one of the best written and most enjoyable biographies I have ever read.

Published by Thriftbooks.com User , 22 years ago
Though Basil Rathbone's autobiography is enjoyable and well-written, it may disappoint you since he talks very little about specific films and plays he performed in. The Sherlock Holmes section is brief, and mainly captures the horror of a classically trained British actor being reduced to a caricature. Rathbone was a wonderful, theatrical actor capable of reaching greatness, but who instead frequently sold out -- and this dreamy memoir suggests some of the reasons. He was known in Hollywood mainly for the lavish parties he and his wife gave, and in fact he writes like a well-bred dinner guest amusing a stranger with anecdotes about co-workers, half-forgotten friends and lovers, and odd experiences. And while son Rodion and daughter Cynthia get almost no mention, there is a vivid and moving portrait of Basil's dog Moritz. That seems to sum up the charm and the limitations of this sweet little book.

Published by Thriftbooks.com User , 22 years ago
This is a well written, insightful autobiography filled with warmth, humor and anecdotes of a life in the theatre. Basil Rathbone was a truly wonderful actor who is known to most people today for his consumate portayal of Sherlock Holmes on film, but who was much more than that singular character. He served in World War I, he was related to Henry and Clara Rathbone - the couple in the booth with Lincoln when he was assasinated. Basil Rathbone was also a dog-lover, and his stories about his dogs are touching, and heart warming. A great read for anyone interested in the man himself, or in the 'behind the scenes' life of an actor in general. Give it a try, you won't be disappointed.

Published by Thriftbooks.com User , 22 years ago
This is just a PERFECT autobiography. If only everyone could write as personal and moving a testimonil. If you like Rathbone, even just a LITTLE bit you MUST buy this book. A more intimate and wonderful autobiography I can't imagine
Trustpilot
Copyright © 2022 Thriftbooks.com Terms of Use | Privacy Policy | Do Not Sell My Personal Information | Accessibility Statement
ThriftBooks® and the ThriftBooks® logo are registered trademarks of Thrift Books Global, LLC