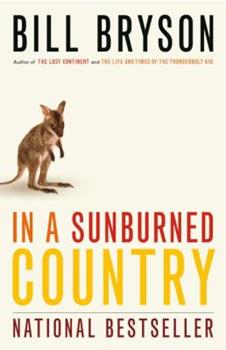 In a Sunburned Country

Every time Bill Bryson walks out the door, memorable travel literature threatens to break out. This time in Australia. His previous excursion along the Appalachian Trail resulted in the sublime... This description may be from another edition of this product.

Published by RickHale , 2 years ago
Bryson is a Yank.. as am I.. but, I lived there for a decade and gained dual citizenship. There is much in this book that "True-Blue" Aussie's don't know. This is a fascinating read, a page turner.. filled with humour, wit and history... and some insight on the flora and fauna..some of the deadliest creatures on our planet. I first read it 20 years ago, just finished a second read a month ago, every page a delight.. You will not be dissapointed.. or.. you can chase me down by the billybong, Under the shade of a coolibah tree, but I'm guessing, after the read, that.. "You'll come a-waltzing Matilda, with me."

This is not a travel book.

Published by Thriftbooks.com User , 15 years ago
Bryson's dry wit and way of looking at himself and the world are inspiring and if you get the humor laugh out loud funny, so if you are planning a trip to Australia by all means read this book first, but understand that it's not really a book about traveling in Australia. Bryson is there to get to know the real Australia, he misses the icons of the country completely. The trips that he writes about are visiting friends or wandering the little traveled roads that even few Aussies have. But you will gain an insight into the soul of Australians, something that will sound very familiar to Americans as their history is so similar to our own, which is probably why we love Australians and more often than not they love us. And after having read the book, if you want to go to Australia and retrace his footsteps and see an Australia that we Americans just miss, we'll, as they say down under, "good on ya".

Very informative, telling you many things no ordinary travel book does

Published by Thriftbooks.com User , 16 years ago
Bill Bryson is best known for writing very humorous travel books, and "In a Sunburned Country" is indeed a funny account of his travels in Australia. Those who love Bill Bryson's books for their humor won't be disappointed. But unlike most people, I like Bill Bryson best when he's NOT trying to be funny, and my appreciation of this book is mostly due to the great amount of very interesting information presented. Bill Bryson amazes you with loads of information about the geology, the animal life, the plants and insects, the history, the statistics, the folklore, etc., etc. The many dangers: poisonous snakes, poisonous insects, poisonous jellyfish, crocodiles, sharks, and rip currents - they're all out to get you. The inhospitable deserts, the beautiful beaches, the huge distances; Bill Bryson gives you a feeling of what it's all like. The book goes into detail about many aspects of Australian life that are fairly unknown, including the discovery (and re-discovery) of Australia, the settlement by British prisoners, the early expeditions to explore the interior, the gold rushes, the outlaws, and the devastation caused by rabbits and other imported animals and plants. Bill Bryson talks about the many unusual animal species found only in Australia, including giant earthworms that grow up to 1 meter (and can be stretched to 4 meters) and the platypus, a cross between a reptile and a mammal. He talks about Australians and the Australian society, and the situation regarding the native people, the aboriginals. Bill Bryson doesn't cover all of Australia from the geographical point of view, and the parts he does cover are somewhat random. But that doesn't matter because he captures the spirit of the whole country based on the parts he does visit and the general information he includes. A very positive aspect is that Bill Bryson makes it clear that he loves Australia. The feeling is infectious, and it makes you want to pack your bags and head "down under" for a long leisurely trip so you can do your own exploring. If I were to mention two things I was less happy about, it would be the occasional excessive attempts to be funny and the lack of contact with Australians. One of the best parts of the book is about his traveling together with an Australian couple for 3-4 days, but other than this passage Bill Bryson is mostly playing the typical tourist, with little or no contact with Australians. And despite a fairly long discussion about the aboriginal situation he does not ever get into contact with any aboriginals. Why not? A final note regarding the unabridged audio version of the book, read by Bill Bryson himself: Most authors are poor readers, but Mr. Bryson does a very good job here, almost on a par with a professional reader. Recommended. Rennie Petersen PS. "In a Sunburned Country" has also been published under the title "Down Under". It is exactly the same book.

Who knew a travel book could be so fun?

Published by Thriftbooks.com User , 17 years ago
Bryson combines a compelling case for a trip to Australia with a terrific sense of humor. Who else could make the driest, most remote, and deadliest country in the world a must for any traveler. I couldn't put this down.

It's a big country...*somebody* has to travel it

Published by Thriftbooks.com User , 22 years ago
I have a great deal of affection for Bill Bryson's writings. I'm a long-time fan of travel essays, but I always cringe at those that take their subjects too seriously...reflecting solely on the majesty, history, culture, and tradition of a place. I want to shout at these writers: C'mon! You're looking for a clean public toilet too, just like the rest of us!Bill Bryson isn't the only humorous travel writer, but he's one of the most effective at taking the p*ss out of travel as a holy grail. He's well informed and read on his subjects, but not afraid to say he's forgotten the name of Australia's Prime Minister (and reflect that that says a lot about the rest of the world's focus on Australia in the global stage). He's curious and willing to try new things like body surfing, but not too proud to let you know he's dead rotten at it. He'll seek out exotic wildlife, and then retreat quickly to safety if it's venomous. He loves to try out the local cuisine, but spends much of his time looking for a cold beer. In short, he's someone *I'd* like to travel with--informed, funny, and personable. He's less grumpy than usual (then again, these travels are less physical arduous than hiking the Appalachian Trail in "A Walk Through the Woods"). His anecdotes are entertaining and informative. I read this book the weekend before the airing of the PBS mega-series on Australia, and learned much more (and laughed a whole lot more too) from Bryson than from Robert Hughes. From the big cities to the Outback Bryson travels (sometimes in a good nature, sometimes in a humorous grumpiness), talking to the people we wish we'd meet on our travels, doing the things we'd like to do, and asking the questions only a man with the outspokenness of an American but the politeness of an Englishman could ask. Which is not to say the whole book is a laugh riot. He's remarkably effective discussing the treatment of Australia's Aborigine tribes by modern culture, and the self-fulfilling prophecy of the country's educational failure in teaching the Aborigines' next generation. That's the mark of the best travel writer, in my view: he makes you laugh, he makes you think, he teaches you something, and best of all, he makes you long to visit and experience the country for yourself.

Published by Thriftbooks.com User , 22 years ago
I am an unreserved Bryson fan. I love "Made In America" about the English language, and, as an Australian living in England for an extended time, thought he captured perfectly both the expat experience, and the endearing and irritating qualities of the Brits in "Notes from a small island" . This book is factually correct. That might sound inane, but there is nothing more irritating than reading about your own place and finding it tritely stereotypical or factually incorrect. Bill scores well on both counts.Bill's take on the Australian Prime Minister of the day (a small, invisible and colourless entity) is a reasonably brave thing to say in a sense - an outsider commenting on a political identity invites derision, but he captures the essence of the man so well.The other special moment for me is his discovery of cricket on the radio...when all other stations fade out to static, there is the mighty game. Somehow or other, despite writing nonsense words, he captures the rhythm and cadences of radio cricket commentary PERFECTLY. To me, cricket on the radio is as much about summer as cicadas, running under the sprinkler and crackling heat. Beautifully pulled off!A good read, and for the first time since leaving school I actually engaged with some of the stories of explorers! A wry but never cynical tone makes for an entertaining read. I am glad he pays "homage" to that other good 'outsider's book' - "Sydney" by Jan Morris. Bill Bryson covers much of the same terrain as the other great US travel writer, Paul Theroux, and seems to meet as many odd or intersting characters. Bill's disposition, however, makes him far more open to LIKING a place, and enormously less self-absorbed. Recommended.
Trustpilot
Copyright © 2022 Thriftbooks.com Terms of Use | Privacy Policy | Do Not Sell or Share My Personal Information | Accessibility Statement
ThriftBooks® and the ThriftBooks® logo are registered trademarks of Thrift Books Global, LLC