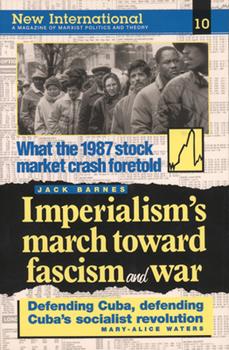 Imperialism's March Toward Fascism and War

by Mary-Alice Waters and Leon Trotsky

Published by Thriftbooks.com User , 18 years ago
This set of articles, written in the early 1990s, is even more relevant today than when they were first written. In contrast to the George Bush the elder's boast that the US was leading us all into a "New World Order" of peace and prosperity, the perspective here is a sober and realistic one: the US is leading the world toward economic depression, a renewal of fascist movements, and if the working class does not take power, World War III. This assessment was based on a series of events, including the gigantic stock market crash of 1987. Preventing World War III, and all that would accompany it, is the challenge facing working people around the world and we need to organize NOW to make sure this is not our future. In light of this, this issue of New International includes an extremely informative article on Cuba, which shows that despite the "Special Period" they were living through, without aid from the Soviet Union, the Cubans were still fighting for a socialist society and because they refused to bow down to capitalist America, they continued to be a thorn in the side of the US. All of this is even more true today, as the stock market bubble of the 1990s has now decisively burst. And what is most striking today is how the jockeying for position heading into the war with Iraq is showing just what this article said: that competition between "allies" within NATO would sharpen. Just look at all the anti-French and German propaganda going around right now and you'll see just how accurate this set of articles was and still is today.

Capitalism Has Nothing To Offer But Fascism And War

Published by Thriftbooks.com User , 19 years ago
This book explains the meaning of the 1987 New York stock market crash and its repercussions; the "Special Period" (term used in Cuba for the economic crisis caused by the collapse in trade with the former USSR and Eastern Bloc, the tightening of the U.S. trade embargo, and the revolution's own admitted errors); the struggle against Stalinism and the "pockets of capitalism" in Cuba, led by the Cuban Communist Party and the revolutionary government; and why the Cuban revolution is still an inspiration for working people all over the world. The march led by Yanqui-U.S. imperialism, in the first place, toward fascism and world war, against its allies/imperialist rivals, against the post-capitalist economic foundations which survive in the workers states ( ex-USSR, Eastern Europe, China, etc.) and against the workers and farmers the world over, including those in the imperialist countries, is explained as well. Finally, this book points out that there is only one road forward for the resistance to this barbarous future: to follow the example of the Bolshevik revolution and the example of the Cuban revolution, applied to the specific conditions of each country, which is both possible and necessary even in the imperialist countries, the U.S. included. Above all, this book is a message of hope and scientific confidence in the workers and farmers of the whole world, based on the experience of the militants who are building the beginnings of a revolutionary workers party in the belly of the Imperial Beast.

what drives economics and politics today

Published by Thriftbooks.com User , 19 years ago
This 1994 volume takes up the long-term economic crisis of capitalism and how it drives the U.S. rulers toward more severe conflicts with their international rivals, and toward a showdown with workers and farmers at home. It explains the rise of fascist perspectives, such as those of Patrick Buchanan and Jean-Marie Le Pen, as the inevitable product of the social crisis that is unfolding. And it describes the increasing use of military force to defend the interests of U.S. capitalism as the result of the needs of a declining empire, not just as the choice of certain politicians.

where we have come from, where we can go

Published by Thriftbooks.com User , 19 years ago
This book's main article is a resolution adopted in 1988 by the Socialist Workers Party explaining the causes and results of the stock market crash. It is a remarkable picture of the growing conflicts between the big capitalist powers--the US, Europe, and Japan--and the economic crises, colonial wars, and other problems that have issued from those conflicts since then. Moreover, there is a program, just as relevant then and today for workers, youth, farmers, racial and national minorities to fight their way out of that to socialism. Not prophecy, but scientific socialist answers about where we have been and where we are going.

A necessary book for any revolutionary!!!

Published by Thriftbooks.com User , 22 years ago
"OCTOBER 1987: a near-meltdown of stock exchanges world wide lays bare capitalism's new vulnerability and increaing instability. 1989-91: counterrevolutionary Stalinist police apparatuses in Eastern Europe and Soviet Union come tumbling down. 1991: a war against Iraq that Washington seeks to portray as victory of a new world order results instead in increasing conflicts among NATO powers themselves, and between them and others in the 'victorious coalition,' from Moscow to Riyadh.1991-1992: in Gulf War's aftermath, it becomes clear that world capitalism has sunk into depression conditions for the first time in half a century; polarization between wealth and poverty grows, insecurity deepens, and ultrarightist forces gain new ground. 1994: despite most difficult conditions in 35 years, Cuba's working people fight to maintain proletarian social relations conquered through their revolution, giving the lie to expectations of 'friend' and foe alike."These are just a few of the events analyzed in this issue of New International that have transformed world politics and frame the growing class conflicts and military confrontations before us today. How the working class and its allies respond to the accelerated capitalist disorder will determine whether or not imperialism's march toward fascism and war can be stopped....And whether a road to the communist future of humanity will be opened" (from the back cover).
Copyright © 2020 Thriftbooks.com Terms of Use | Privacy Policy | Do Not Sell My Personal Information | Accessibility Statement
ThriftBooks® and the ThriftBooks® logo are registered trademarks of Thrift Books Global, LLC