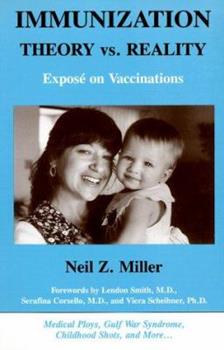 Take a trip into the shadowy underworld of vaccine theory, where live viruses are brewed in diseased animal organs proir to being stabilized with chemical compounds and carcinogenic substances, prior to being injected into your healthy child. Then take a look behind the scenes at vaccine reality, where thousands of children are damaged and killed every year, where Persian Gulf War patriots are freely experimented on, and where human genetic patterns...

Published by Thriftbooks.com User , 16 years ago
'Immunizations', a euphemism for forced vaccinations, have outwardly cost 500 million dollars and an impending estimated 1.5 billion dollars from current lawsuits from caused deaths and disabilities. Neil Z. Miller's expose on the likely insanity and dangers of this 'treatment' seems very well documented. Studies show the inefficacy of vaccination but its practice goes on. Miller points to obvious data showing that the amount of vaccination in a culture is in direct proportion to its disease incidence. Miller ties in the facts of our rampant and zealous childhood vaccination programs with our extremely high infant mortality rate (for a developed country). These vaccinations typically contain mercury, aluminum and formaldehyde. An adverse reaction from a vaccine on a child is not attributed to the vaccine if the reactin occurs more than a few hours later. This and other unsound data collecting techniques protect this possibly lethal practice. U.S. soldiers from the Gulf War had a high incidence of complications. The British and French troops did not. The difference? The American soldiers received extensive 'immunizations' (including anthrax) before their deployment. Miller also brings up the quite alarming possibility that the AIDS epidemic was a purposeful event on the peoples of Central Africa. The countries that received our 'help' with extensive immunizations (known live viruses along with plenty unknown viruses found in monkeys) had the highest incidence of this disease. Hopefully Neil Miller's work will get the attention it deserves from the World Health Organization and others so that if there is healing to be done from this travesty, it can be done now... and a lesson can be learned. Five Stars

Published by Thriftbooks.com User , 20 years ago
You owe it to the health of your child to do the reasearch before allowing him/her to be immunized. I have done alot of reading and talked to several Dr.'s and have decided against any immunizations. The information is out there. Why take a risk? I started seeking info. after I became pregnant because I worked with a man who has a 5 yr. old that is severly damaged by the DPT vaccine. He was a thriving baby, doing everything on time until his 6 month vaccines. That night he started having severe seizures, up to 100 per day. Now he is unable to walk, talk, or function at all. It's sad. I will not take that chance and I have made an informed decision. You can double check Mr. Miller's information. He's not making any of this up. It's based on fact, not opinion.

Had I only known.

Published by Thriftbooks.com User , 21 years ago
To my oldest son, I am so sorry I didn't read this before you were born. Someday I hope you will understand me enough to accept my apology.

Exposing the Dark Side of Mandatory Vaccination

Published by Thriftbooks.com User , 21 years ago
This book was well worth a second read. I first read it in 1996. As a member of the generation that was allowed to get the measles and chicken pox, this book made sense to me. As the parent of a child brain-damaged from pertussis vaccine toxins, I welcomed this well researched work. I wish I had read it when I was pregnant with Bill. I read so much on nutrition and breast-feeding. I did not even know that infants were vaccinated before I took my son to his first well-baby visit at 6 weeks old. I thought it was just that, a well baby visit. The doctor's attempt to fix what was not broken resulted in a developmentally delayed baby and then later a moderately mentally retarded adolescent. Now with a mentally retarded adult child, I can say there is nothing moderate about post-vaccinal encephalopathy. The politics of immunology is well reported in this little book. It is very to the point. Mr. Miller proves his thesis over and over again and vindicates those professionals who have gone against the grain and refused to participate and those parents whose voices are too seldom given a hearing on this issue. I love a good expose' and this is the best of its genre. It's a great murder mystery, a whodunit that Mr. Miller unravels in great style. The truth is always good, sometimes it goes down a little hard. The price of the book is little to pay for a truth I learned the hard way. ie The truth that corporate profits are being served and not public health. I have bought several copies and given them away. The reality of the tragedy and the scale of this tragedy that he reports on has been suppressed. As a Holocaust Studies major, I cannot help but notice the similarities between attrition by vaccination and the systematic nature of the other war against civilians. One of those similarities has been the refusal to believe atrocity stories. As a parent who 22 years ago began telling of the terrible trauma inflicted on my innocent son, I feel vindicated but I don't feel better. Two of the chapters in this book are "Human sacrifices" and "Genocide". Find out what are federal government has been up to while we have been looking the other way. Margaret S. Scheuer

Interesting and informative, a must for all parents.

Published by Thriftbooks.com User , 24 years ago
A great book, deffinitly shows the other side of vaccinations. Includes information on vaccine ingredients, studies relating to vaccination from medical journals, and personal stories. Chapters include: "History of Vaccines" "The Immune System" "Federal Admission of Vaccine Risks" "Who Pays for Compensation?" "How Are Vaccines Made?" You owe it to your children, your granchildren, and yourself to read this book. Prepare to be shocked...
Trustpilot
Copyright © 2022 Thriftbooks.com Terms of Use | Privacy Policy | Do Not Sell or Share My Personal Information | Accessibility Statement
ThriftBooks® and the ThriftBooks® logo are registered trademarks of Thrift Books Global, LLC