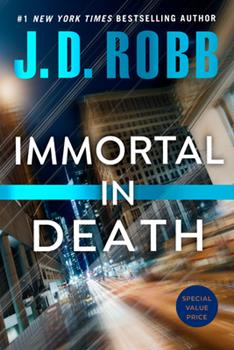 In the third novel in the #1 New York Times bestselling In Death series, Lieutenant Eve Dallas uncovers a world where technology can create beauty and youth, but passion and greed can destroy them...She was one of the most sought after women in the world. A top model who would stop at nothing to get what she wanted--even another woman's man. And now she was dead, the victim of a brutal murder. Police Lieutenant Eve Dallas put her life on the line...

The Only Series Of Her's I'll Ever Read

Published by Thriftbooks.com User , 6 years ago
This the only series of hers I'll ever pick up, there's just something about this series that has me 100% hooked on it, and even if I'm slowly getting them and read them out of order I'm loving them, on days that I don't feel like reading I just pick up one of the ones I have and its like I'm reading it for the first time all over, love the 2 main characters, can't wait until I get more of this series to add to my library and read.

The futuristic series that captivates

Published by Thriftbooks.com User , 18 years ago
At the end of the previous book, "Glory in Death", Roarke proposed to Lieutenant Eve Dallas after they were both involved in a life-threatening situation with a dangerous killer. Nora Roberts, writing as J.D. Robb, shocks us right from the start of this book, when we find that Eve accepted the marriage proposal! For those of you that have read the previous novels, this must come as much of a surprise as it was for me. Eve has always had trouble accepting the fact that she was in love, so it was almost unthinkable that she would be willing to share her life with the billionaire Roarke. However, this sets the tone for the things to come in this book, where we will find out several interesting facts from Eve and Roarke's past. These tidbits of information help us make sense of the attitudes we witnessed from several of the main characters in the past.This time, the crimes Eve has to investigate are very close to home. Eve's best friend, Mavis, has convinced her to consult with designer Leonardo about her wedding dress. Mavis is in a relationship with the designer, and facing a very jealous ex-girlfriend, Pandora, who is literally fighting to get Leonardo back. One night, Mavis calls Eve in a frantic state from Leonardo's study and asks for help. She had found Pandora, the supermodel with which she had a big fight hours ago, lifeless on the study floor. Eve sets out to find out the culprit and clear her friend. In the meantime, one of Eve's informants turns up dead too, and the investigation leads to a new and deadly drug.Robb has created a wonderful setting for her mysteries, New York in the year 2058, and has perfected the mix with some great characters, making this one hell of series. In this particular case, besides the "usual suspects", we are introduced to the character of detective Peabody, Eve's new partner after Feeney's promotion as captain of another division. Even though I think there is a clear advantage of reading this series in order, and grasp the complexities and personal history of each character, the books stand well on their own. Moreover, J.D. Robb does a great job in describing the futuristic world efficiently through examples intertwined in the narration of the events, without making it boring for those of us who are already aware of what the "rules" are. Whether you try this book on its own or you start from the beginning of the series with "Naked in Death", I can guarantee that you will enjoy reading about Lieutenant Eve Dallas and her friends.

They just keep getting better!

Published by Thriftbooks.com User , 21 years ago
In this segment Eve is investigating the murder of a top fashion model. Mavis, Eve's very best friend becomes the main suspect. Leonardo, whom Mavis is in love with is also a suspect and is designing Eve's wedding dress for her soon to be wedding to Roarke. Eve does everything in her power to find the real killer and get Mavis off the hook. Eve knows her friend couldn't possibly do this, in spite the evidence. After Eve and Roarke have Mavis staying at their house, more murders happen which do seem connected. Eve finds a new drug seems to be connected. The people murdered were either consuming this drug or dealing it. This new drug is fatal but it makes you young and sexy and eaten up by the wealthy and powerful especially in this fashion world. Peabody is back in this book and is becoming Eve's aide in the homicide world. You learn more of Eve and Roark's past. These books just keep getting better. What an excellent series!!!

Published by Thriftbooks.com User , 21 years ago
In the latest in the series, "Immortal in Death," we find Eve shopping for a wedding dress to wear to marry the hunk Roarke. If you've read any of the other books in this series, you'll understand why it is so unusual for this tough city cop to be dress shopping. A supermodel is murdered and Eve's best friend, Mavis, becomes the prime suspect. Also suspect is Mavis's boyfriend, Leonardo, who just happens to be the designer of Dallas's wedding dress. While investigating the murder and digging up the dirt on the fashion world, Dallas discovers that the model (and most of the suspects) are either consuming or dealing a new and illegal youth serum. It's hard to guess the murderer is in this book, the entire mystery is well written by Robb who keeps the reader guessing.Mavis's character is brought out in more depth, and Peabody's character is broadened as well making her Eve's aide. Roarke and Eve's relationship shows more depth in this book then in the previous books and we learn more about Roarke's background.Read the entire series of these "in Death" books, start with Naked in Death the first of the series. They are all excellent.

Published by Thriftbooks.com User , 22 years ago
J.D. Robb's Eve Dallas mystery/romance/scifi novels are wonderful, and IMMORTAL IN DEATH is one of the best. A much hated model is murdered. Eve's best friend, the absolutely ditzy but loyal Mavis, is a suspect since she fell in love with the hot designer, Leonardo, who had also been the vapid, vicious model's boyfriend. Roarke, Eve's dashing, mysterious almost-husband, gets involved. Peabody, the stalwart, hopelessly romantic cop, makes a strong appearance in this novel. All the trademark sex, zingy dialogue, and good mystery elements are in evidence. Eve solves the crime, but nearly loses her life. J.D. Robb's a bloody genius with these books.
Trustpilot
Copyright © 2022 Thriftbooks.com Terms of Use | Privacy Policy | Do Not Sell or Share My Personal Information | Accessibility Statement
ThriftBooks® and the ThriftBooks® logo are registered trademarks of Thrift Books Global, LLC