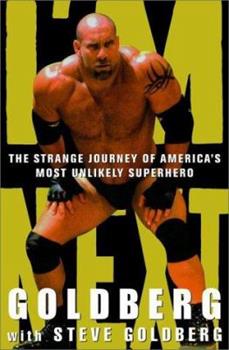 I'm Next!: The Strange Journey of America's Unlikely Superhero

by Bill Goldberg and Steve Goldberg

Traces the career of the NFL player-turned-professional wrestler in his own words.

A Great Book About a Great Guy

Published by Thriftbooks.com User , 21 years ago
When compared with its other wrestling brethren (auto)biographies, Bill Goldberg’s "I’m Next: The Strange Journey of America’s Most Unlikely Superhero" holds up well against it’s competition. Overall, this book was pretty good. It is great for what it is, a good look into his life (as all biographies SHOULD be) and a great look into how his wrestling character and career evolved.Here’s what we learn about Goldberg: 1. First and foremost we learn about his football career (and perhaps manhood) ending injury.2. How he got into the wrestling business through his association with tons of WCW wrestlers whom he worked out at the gym with including Sting, Luger, DDP and Buff Bagwell.3. A VERY comprehensive look at how he broke into the business, including negotiating with both the WWF and WCW, his training at the WCW Power Plant and the evolution of the Goldberg character including look, fighting style, etc.4. A comprehensive look at his ENTIRE WCW career from start to (at the time) present. It’s an honest, unbiased look at how Goldberg quickly rose through the ranks. He is very honest about his capabilities and how he has been privileged. He does not have a "big head" whatsoever.5. A look into his family background. (with Guest Chapter Authoring’s by Goldberg’s dad and brother)6. A look at his ENTIRE football career from high school to college to WFL (World League), brush with the Canadian CFL to the NFL.In addition to this, you also get a great look into the MIND of Goldberg. He comes off as an intelligent and a very genuine individual who has deep beliefs and deep convictions. You’ll learn his views of how to handle business, his strong feelings for his family and friends, and his thoughts on other wrestlers and other celebrities, and his thoughts on religion (including a great view of how it is to be a ... role model), football and his deep love for his animals and his girlfriend. Also, the book contains some GREAT anecdotes and stories from Bill’s life including his childhood, GREAT college football stories and an AWESOME SuperBowl story about him and Scott Steiner.Here’s my rundown:Great: The anecdotes and stories about his football career and his life in the public eyeGood: Delving deep into Goldberg’s mind. He comes across as just a GREAT guy, full of convictions and strong beliefs.Cool: TONS of great pictures of him and his family, friends and other celebrity friendsFor our wrestling fans: How he broke into the business and developed his character. It’s a great behind the scenes look.Nice Touch: Having both his dad and brother write chapters in the book. He clearly is a strong family man.Bad: Nothing at allSummed up, this is just a great book to read. It may never become a "literary" classic, but it’s just a great biography about a great person and his story. Goldberg has often been harshly and sharply criticized, sometimes perhaps deservedly so. However, once you read his book he easily comes across as an honest man. All

If you want to know Bill Goldberg, read this book

Published by Thriftbooks.com User , 21 years ago
Bill Goldberg tells it like it is in his book and he is sincerely grateful for his success. This isn't just another mechandising opportunity for Goldberg,(he has plenty) it's his chance to share his strange journey with his fans. This isn't a churned out ghost written autobiography, this was a year long project. How do I know this? Because I'm Bill's brother (he used to be my brother before he became famous) and we wrote this book together. I spent countless hours taping Bill's story and after I put it down on paper, Bill edited every chapter...three times! After his first edit, I would do a rewrite and send it back to him. Then he would edit it again and I would do the second rewrite and submit it to our editor at Crown Books. After his suggestions, Bill would look it over one last time to make sure it was just right. It was a royal pain...but it was worth it. You see, Bill Goldberg is a perfectionist and if he was going to do a book, it had to be good and humorous and most importantly, it had to sound like him. I observed my brother living the American dream and his success story was too cool not to share. I said to Bill, "Dude, someone should write a book about your bizarre life... and that someone should be me." He said "let's do it brother" and so we did. And we're very proud of our efforts. We thank you for buying 'I'm Next' and we hope you enjoy it.

You Can't Put It Down

Published by Thriftbooks.com User , 21 years ago
I write wrestling columns for two websites. We see wrestlers come and go with little or no fanfare. When Bill Goldberg burst on the wrestling scene, nobody had every created that much notice in that short length of time. In the book, Goldberg discusses the "positives" that this brought, and he pulls no punches (pun intended) talking about the negatives that he is learning from. If you are a wrestling fan, add this one to your library!

A great book for fans of any sport

Published by Thriftbooks.com User , 21 years ago
I've only gotten through the first 5 chapters and I'm already in love with the book. So many questions that ponder Goldberg fans' minds are answered by the only person that can answer them. There are many excerpts from other wrestlers and several amazing photos from throughout his life. I would've given it 10 stars but I was only allowed 5. Being the extreme Goldberg fan I am and webmaster of BGoldberg.com, I highly recommend this book to practically any sports fan because it's not just about wrestling. It's about hard work, dedication, and the suffering it takes to be the best at what you do.
Trustpilot
Copyright © 2022 Thriftbooks.com Terms of Use | Privacy Policy | Do Not Sell or Share My Personal Information | Accessibility Statement
ThriftBooks® and the ThriftBooks® logo are registered trademarks of Thrift Books Global, LLC