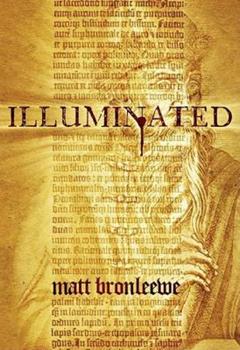 (Book #1 in the An August Adams Adventure Series)

August Adams has failed his family before. He's sacrificed relationships in pursuit of adventure, fame, and money. Now the very lives of those he loves depend on his ability to decipher a centuries-old puzzle encrypted in the colorful hand-painted illuminations that adorn three rare Gutenberg Bibles. It's a secret that could yield unimaginable wealth, undermine two major religions, and change the course of Western civilization. Two ruthless, ancient...

Published by Thriftbooks.com User , 14 years ago
I heard about this book when it first came out but just now had a chance to read it right before book 2 came out. A great read that reads quickly. It reminds me of alot of National Treasure but deals with church history and the Guttenberg Bible instead of American history. Some of it does seem sensational but it is still a fun read. Also I liked the characters as they had some major issues/flaws that we can all relate to. I have already picked up a copy of House of Wolves (book 2) which looks just as good.

Bronleewe blows out of the starting gate with this debut novel

Published by Thriftbooks.com User , 15 years ago
Matt Bronleewe is a man of many talents. He's an accomplished music producer who's worked with the likes of Rebecca St. James, Plumb, Michael W. Smith and Leeland. He's penned or co-penned a number of top-of-the-charts hits. He was a founding member and guitarist for the band Jars of Clay. Now he's written Illuminated---a blockbuster thriller that could easily place him on the best-seller lists. With a National Treasure meets The Da Vince Code style, Matt blows out of the starting gate with this debut novel. "I love books," he told me. "I wanted to write a book about a book." Like any good thriller, Illuminated immediately draws readers into August Adams' world. A former archeobibliologist, he's now a rare book scout who travels the world searching for valuable tomes. His thirst for adventure has led him into more than one scrape, and he's just about ruined himself financially. On Flight 1213 far above the Atlantic ocean, he starts up what he thinks is a casual conversation with his attractive seat mate Xandria Muro. August tells her he's on his way to New York to deliver his rarest find yet--a Gutenberg Bible. Single pages can fetch $20-100K, and a complete book has been estimated to sell for 100 million if sold at auction today. Soon however, Xandria turns extremely unattractive. She believes the Gutenberg holds the key to a treasure hidden for half a millennium. Not only does she want August to give her the Bible, she needs him to decipher the beautiful illuminations found on its pages. If he doesn't, Xandria makes it clear his eight-year-old son Charlie and ex-wife April (who is also an archeobibliologist working at the Library of Congress) will die. And that's only within the first three chapters. Full of facts about Gutenberg, his Bibles, secret societies, and murderous villains, Illuminated takes readers on a wild ride. It's nonstop action from page one, but Matt doesn't neglect to give us background characterization of the major players (albeit in small doses). "I wanted to make a thinking person's film, but on pages," Matt further clarified in our interview. And that's exactly what he's done here. Even before talking to him I thought Illuminated could easily be next summer's blockbuster movie. Heavy on action and dialogue, it would translate well to the big screen. But it also works in book form. Sometimes you wonder if someone successful in one creative area (like Matt is in the music world) can succeed in another. This is one of those cases where the transition really works, perhaps because music and books are both powerful mediums for delivering truth. Illuminated follows the path many Thomas Nelson novels have taken before--delivering a compelling story from a Christian worldview, but keeping things light on the spiritual side. There's definitely a huge respect for Scripture in the novel (thanks to the Gutenberg), but that's about as far as things go. Matt uses restraint when depicting some violent situations, but there is one sc

Published by Thriftbooks.com User , 15 years ago
Secret societies, hidden codes, ancient art - This isn't the latest controversy penned by Dan Brown. This is a stunning debut novel from producer/songwriter Matt Bronleewe. Illuminated combines edge-of-your-seat action with a centuries old mystery, creating a story that hooks the reader early and keeps the pages turning. Most ancient book scholars spend their days in rooms devoid of sunlight examining books many centuries old, but August Adams isn't your standard, everyday archaeobibliologist. Not content to remain in the confines of museums and back rooms, August throws himself into the acquisition and sale of ancient books. Because of August's thirst for adventure he has fractured his relationships with his son and his (now ex) wife, and he struggles to keep his head above water financially. After a brief prologue introducing the reader to a young Johannes Gutenberg, the man who would later invent the printing press, the book opens with August leaping into the heat of the excitement as the airplane he is on experiences some extreme turbulence. After the turbulence dies down and he returns to his seat we find out that August has found a Gutenberg Bible, one of the rarest, and therefore costliest, books in the world and is delivering it to a buyer in New York. He has high hopes that this one sale will bring him out of debt and put him in better standing with his kid and ex-wife. August and his family are then swept up into a centuries old mystery involving secret codes hidden within the illuminations in the margins of Gutenberg Bibles and secret societies connected in some way to both the Knights Templar and Count Dracula. Unrelentingly paced, Illuminated grabs you by the shirt and doesn't let go until long after the final page has been read. I highly recommend this book to anyone who likes a good intrigue. Be warned though, this book is NOT for the faint-of-heart; there are one or two scenes that contain somewhat graphic violence. My only complaint for Mr. Bronleewe is that the book ended too soon. I would have liked more interaction between August and his family, and more information about the secret societies. Matt Bronleewe represents the next generation of Christian Fiction, and the future looks very bright.

Published by Thriftbooks.com User , 15 years ago
This book rocks. It's like reading a major motion picture. Swift but detailed, you feel involved in the character's lives and still retain the vision and movement of the big picture. Great for summer travels!

Published by Thriftbooks.com User , 15 years ago
This book is great and I got through it in just three days. It is written by newcomer Bronleewe and this is a great achievement for a starter. This book cleverly combines historical fact with conspiracies better than Da Vinci Code ever did. The format of the story is more like 24 than anything else. The main characters of this story is August Adams(rare book dealer), his ex-wife April(works at Library of Congress), and his son Charlie. It revolves around two secret societies(ORPHANS and the ORDER OF THE DRAGON) and a secret hidden in the illuminations of three fifteenth-century Gutenberg bibles. I found myself reading this book like a thrilling movie.
Trustpilot
Copyright © 2022 Thriftbooks.com Terms of Use | Privacy Policy | Do Not Sell or Share My Personal Information | Accessibility Statement
ThriftBooks® and the ThriftBooks® logo are registered trademarks of Thrift Books Global, LLC