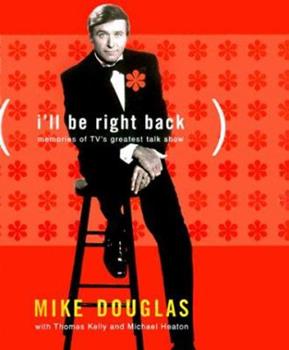 I'll Be Right Back: Memories of TV's Greatest Talk Show

A memoir by a popular talk-show host looks back on interviews with his many guests, including Barbra Streisand, Malcolm X, Fred Astaire, Mother Teresa, and Jay Leno.

Those were the days!

Published by Thriftbooks.com User , 21 years ago
I remember growing up watching the Mike Douglas Show after school and this book brought back lots of good memories. It will be hard for any talk show host to match Mike's graciousness and talent. He was able to make people from all walks of life open up and share a little bit of themselves (good or bad) and I'm really glad that Mike shares his memories with us so we can all enjoy some of those moments once again. I hope Mike writes volume 2 soon!

Published by Thriftbooks.com User , 21 years ago
Hi!! I have recently bidded on this book, signed by Matt from the Real World New Orleans and won! So I just came to see how it looks...doesn't look too thrilling!!

set the precedence for Larry King...et.al..

Published by Thriftbooks.com User , 22 years ago
One vignette-- & M.D's most loss of prestige-when F Sinatra cancelled because of a bogus rumor given to media. Should be read by every fan of D.Letterman,Leno-- Douglass was...well connected.

Singer Everyone Loved to Talk to

Published by Thriftbooks.com User , 22 years ago
When Douglas starts by making it crystal clear there will be no complaints or gripes about mean stars in his book, we expect a pleasant, harmless read. Foolish thought--nothing Douglas does is second-rate! He has created an exciting, sizzling book by using hundreds of spicy anecdotes and tons of exciting, top-quality black and white photos that appear every other page (our favorite--nutty Prof. Irwin Corey sitting between a doubled-over-with-laughter Douglas and a clearly frightened Liberace). The writing style is highly energized and original: "Traumatic childhood? Heck, no. I thought we were upper-middle-class. Did we have any problems? A couple, sure;" or, "...she started into 'Respect.' Oh my. Energy? She set the place on fire." His show aired every weekday starting Dec. 11, 1961, and, by 1964, was the #1 daytime show in the U.S. He claims his two decades of success with the show were due to his stiffling his ego and instead showcasing the guests, never confronting them. Douglas takes most pride in turning out a live 90-minute TV show daily, while producers today take months to do one special. While making it clear he loves everyone, Mike's hidden resentments come out loud and clear: a very difficult Sinatra, no-show guests, Gleason angry after losing to him at golf, and his quiet fury at being dumped at the end by Westinghouse after making them millions. This is one nice, classy man, but the hurts come across powerfully, and Mike forgets none of them. Along with anecdotes and hurts are deep insights into the singing talents of all the great vocalists of our time and wise advice for today's talk show hosts. And what stories! His losing a golf match to Nicklaus by on stroke; Malcolm X telling him he wanted to change his philosophy of violence; Prof Irwin Corey's being carried out by two studio workers after refusing to stop talking; a bear knocking his trainer out cold and then Mike's quietly leading him by his chain into a cage as the audience ran out, Mike's cutting in on President Johnson after LBJ danced too long with his wife. Douglas argues throughout the book that he is really a singer, and not a talk show success, but the evidence loaded into this book shows him to have been a brilliant, clever host with a beautiful heart that warmed up every guest. With tens of thousands of stories yet untold, readers can only hope Douglas follows this beautifully written book with numerous sequels. Let's hope that Mike will indeed "be right back."

Fun and heartwarming look back at the Mike Douglas Show.

Published by Thriftbooks.com User , 22 years ago
What a delightful book! For anyone who ever watched the Mike Douglas Show, this book is a must. It is filled with anictdotal gems from the show and behind the scenes. While reading the comedians chapter, I frequently laughed outloud. The stories about the various comedians are absolutely hilarious! Mike's easy-to-read style of writing takes you through the most memorable events from his years doing the show. What comes through loud and clear from reading this book is that Mike Douglas really loved doing his show, from singing with the most famous singers in the world to making people laugh with the most famous comics. Mike is a true gentleman. I loved his show and I loved and cherished every moment reading this book. It brought me back to simpler times, when people could be entertained by laughter and song rather than much of what is out there today.
Trustpilot
Copyright © 2022 Thriftbooks.com Terms of Use | Privacy Policy | Do Not Sell or Share My Personal Information | Accessibility Statement
ThriftBooks® and the ThriftBooks® logo are registered trademarks of Thrift Books Global, LLC