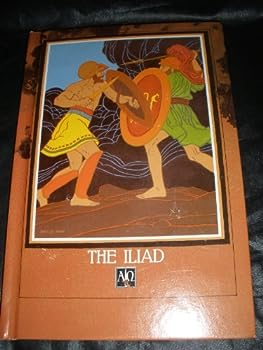 Review of Martin Hammond's translation of the Iliad

Published by Thriftbooks.com User , 17 years ago
This is specifically a review of Martin Hammond's translation of the Iliad (I've noticed that reviews for different editions often appear lumped together). This is by far the best translation of the Iliad I have ever encountered and it led me to finally read the Iliad from beginning to end without skipping bits or skimming. It is a modern prose translation but is also faithful to the meaning of the original Greek (since the translator is not forced to try to turn his translation into verse). I simply cannot recommend it enough. A nice touch is that Hammond has given the different characters names that are far closer to the original Greek then the ones often used in other translations (e.g. Achilleus, Aias, Patroklos, Hektor).

One of the great works of western literature...

Published by Thriftbooks.com User , 17 years ago
Many mark "The Iliad" as the first major work of western literature. Others will give works such as "The Epic of Gilgamesh" that honour, nonetheless "The Iliad" is truly a great poem. In fact, both "The Iliad", and "The Odyssey" were tremendously influential (some even liken their prominence to that of the Bible) to the ancient Greek society that would provide much of the framework for the modern western world. Few other works can make such claims. "The Iliad" is essential reading for anyone who wants to understand the origins of western thought.One word of advice, however, is that if you are unfamiliar with the epic style, you may wish to begin with "The Odyssey", despite the fact that, at least in plot, it is the successor to "The Iliad". "The Odyssey" is a far easier read, and found by many to be more exciting than "The Iliad" (which can, at times, be somewhat tedious). If you are left thirsting for more, tackle "The Iliad".

Hammond or Fagles? ...Paris passes on this one...

Published by Thriftbooks.com User , 20 years ago
[From Boating on the Catawba...in the "Musketaquid"]If you pass on reading this work in theoriginal Greek [*Homeri Opera: Tomus I,Iliadis Libros I-XII and Tomus II, IliadisLibros XIII-XXIV*; Oxford Classical Texts,Oxford University Press], then I wouldsuggest these two excellent translationsas your possible choice for enlightenment,inspiration, and enrichment through theEnglish language...and through the wondrouspowers and arts in the minds of these twotranslators: Robert Fagles or Martin Hammond. I first fell under the spell of Fagles'art and poetry and power in his translationof Aeschylus' *Oresteia.* [Penguin Classics]And his co-creation of Homer's wonder, throughEnglish, is also compelling. But I also am very much drawn to Martin Hammond'sprose translation of the *Iliad.* Here are the two tranlators presenting thesame Homeric passages -- judge for yourself:[...the coming of Apollo into battle; the smiting of Patroklos...*Iliad*; Book 16]Fagles: ...and Patroclus charged the enemy, fired for the kill.Three times he charged with the headlong speed of Ares,screaming his savage cry, three times he killed nine men.Then at the fourth assault Patroclus like something superhuman--then, Patroclus, the end of life came blazing up before you,yes, the lord Apollo met you there in the heart of battle,the god, the terror! Patroclus never saw him coming,moving across the deadly rout, shrouded in thick mistand on he came against him and looming up behind him now--slammed his broad shoulders and back with the god's flat handand his eyes spun as Apollo knocked the helmet off his headand under his horses' hoofs it tumbled, clattering on with its four forged horns and its hollow blank eyesand its plumes were all smeared in the bloody dust.Forbidden before this to defile its crest in dust,it guarded the head and handsome brow of a god,a man like a god, Achilles. Hammond:And Patroklos charged at the Trojans with murder inhis heart. Three times then he charged like theswift war-god himself, shouting fearfully, andthree times he killed nine men. But when for thefourth time he flung himself on like a god, then,Patroklos, the ending of your life was revealed.Phoibos met you in the battle's fury, terrible god.Patroklos did not see him moving through the rout.Apollo came against him hidden in thick mist, andstood behind him, and struck his back and broadshoulders with the flat of his hand, so that hiseyes spun round. Then Phoibos Apollo knocked thehelmet from his head, and the great masking helmetrolled clattering under the horses' feet, and the hair of its crest was sullied with blood and dust.Before now it was not permitted for this horse-crested helmet to be sullied in the dust, but itguarded the head and fine brow of a godlike man,Achilleus.* * * * * * * * *Both editions also contain excellent Introductions,with the Hammond edition having a Book by Bookcritical summary as part of the Introduction.However, the Fagles edition Introduction [writtenby Ber

The First if not the Best Novel

Published by Thriftbooks.com User , 20 years ago
I went into the Illiad, reading it because I thought that I was expected to. The Illiad is the sort of reading that is expected of a well rounded and enlightened individual. However, instead of a dusty tome, I found a vibrant, lively book, full of rage and sorrow, brimming historical accounts laced with godly intervention. The most amazing aspect, apart from the grim battle scenes (and they are unflinchingly gory), is the depth to which Homer explores each of the major characters. There are no bad guys or good guys, each man portrayed is multi-faceted with dark and light qualities. Achilles' the supposed hero is vain, vengeful and spiteful, the villian Hector is seen a reluctant defender who mourns his wife and child even before his death. And Paris the center of it all, a pathetic selfish man, who possesses an unearthly charisma. This novel is amazing and astounding in that it not only tells a great story, but that it asks the eternal questions of mankind, about fate, bravery and a life well lived. The Illiad is the starting point of the Odyssey and the Aeneid both classics of epic poetry and the Illiad is also ripe with Greek Mythology. I cannot more highly recommend a book than this one.

Published by Thriftbooks.com User , 21 years ago
A question ritually asked in literary circles is, "Which do you like better, The ILLIAD or The ODYSSEY?" Without hesitation, my response is The Illiad. Brimming with war, revenge, hatred, love, and beautifully translated prose, the Wordsworth Classics' version offers a first time reader or a scholarly sage a definitive copy for their collection. Homer's work has been spoken of for more than two milleniums and the Trojan/Greek war is recounted with such power and engagement, it still remains a heavily cited and easily reurnable story. Hours of enjoyment and antiquated adventure await.
Copyright © 2020 Thriftbooks.com Terms of Use | Privacy Policy | Do Not Sell My Personal Information | Accessibility Statement
ThriftBooks® and the ThriftBooks® logo are registered trademarks of Thrift Books Global, LLC