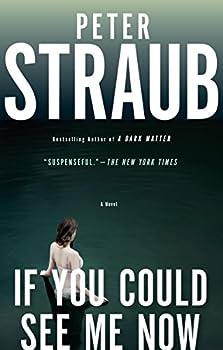 If You Could See Me Now

One summer night in 1955, a boy and his cousin plunge naked into the moonlit waters of a rural quarry. Only one of them emerges. ? Just as he had promised he would on that fateful night two decades earlier, Miles Teagarden--now divorced and a struggling writer--returns to his family home in Arden, Wisconsin. But the landscape he once knew so well has turned eerie and threatening. In the small town, his erstwhile friends and rivals, even his blood...

Published by Thriftbooks.com User , 13 years ago
Peter Straub's best fiction can be summed up as someone committs a crime (generally against a woman) sometime in the past and then that victum becomes a ghost who haunts her tormentors after 20 or more years. The people involved with the crime have by that time grown up and attempted to distance themselves from the act. But they don't really get away as mysterious and strange things plague them just as they think they have gotten away. Its what made his masterpiece, Ghost Story, work so well. But it took some time and other novels before Ghost Story could be written and If You Could See Me Now, is an example of a stepping stone in the right direction. The first novel, Straub wrote, using his classic ghost theme was Julia followed by If You Can See Me Now and both together show how he has progressed. If You Can See Me Now is about Miles Teagarden, a middle aged, English professor, who decides to leave the city to wrote his dissertation in the quiet rural town of his childhood. That's when the fun starts. The closer Miles gets to Arden, Winconsin, things begin to go wrong. When he finally arrives in his hometown, no one wants him there. His childhood friends who have all grown up and are well established in careers want nothing to do with him. His cousin who allows him to live in his grandmother's old house to write, is hostile to him. That hostility grows and increasing as the novel prgresses. In a way it does make sense, in that certain country towns have this suspicion of new folks, even people returning to revisit their childhood, and sometimes make trouble. Straub exploits this point to the max as everyone in Arden turns on Miles. He can barely go into the bar and ordered a drink before the owner is ordering him to get out. Its bad enough to have an entire town hate you but when a certain ghost comes to haunt him, it does get worse. This is a fast paced entertaining novel that really picks up in the last 40-pages. Reading the ending, I wanted to yank the phone cord from the wall jack and shut myself off from the world. Straub paints realistic characters and builds suspense and mystery that have you wanting to know what going to happen next. Before Straub starting writing supernatural novels, he went out and bought the best American and British ghost stories books he could find. You can see his influences and how he modernizes it to suit the latter part of the 21st century. There are elements of H.P. Lovecraft, Henry James, Algernon Blackwood, M.R. James, and even Ambrose Bierce. As I write this review, the Fall is just starting and the time is right for scary stories late at night.

imagin if you made a bet with a friend

Published by Thriftbooks.com User , 13 years ago
to meet each other in 20 to 30 years know matter what you or they were doing.No matter what.You would see each other on this day this time.Nothing will stop you.Now suppose your friend died.That would pretty much stop things don't you think? Not in this storie. Read it.That good

Published by Thriftbooks.com User , 19 years ago
Thirteen year old Miles Teagarden and his one year older racy cousin, Alison Greening, went skinny-dipping in the quarry in Arden, Wisconsin, and made a pact to reunite twenty years in the future. Only Miles left the quarry alive. He doesn't remember what happened, but Alison drowned and everyone blamed him for it - though, hypocritical prudes that the townsfolk were, they felt the girl had it coming.Now, twenty years later, Miles has returned to honor the pact. With his return comes a shocking wave of serial murders and abductions - all of young girls of Alison's age and appearance. Suspicion falls upon him, and Miles has a knack for making it all worse. He's ruffling a lot of feathers, figuring out what really happened to Alison all those years ago. And before long, he's got much bigger worries than being the prime suspect in the most horrific crimes Arden has ever seen - because it seems someone is trying to kill him...This is a flawed novel, but it's a great flawed novel. Written between his debut book, Julia, and his most popular work, Ghost Story, Straub's If You Could See Me Now is a bridge between his supernatural horror fiction and his later Blue Rose murder mystery trilogy. The suspense in this book is superior, never letting up and continually adding new surprises in plot development.The book is thematically rich, and could easily become the subject of any number of contemporary literature research papers. It is mostly a murder mystery, and a well-written one at that. The supernatural element in the story is ill-explained and seems somewhat inconsistent, yet it works. Alison's motivations are not understandable, though in large part Straub seems to have intended her character to be enigmatic - her name, and her method of manifestation, suggest a change in her akin to becoming some sort of perverse nature elemental.If you like suspense - supernatural, or more mundane crime melodrama - this is the book for you.

Published by Thriftbooks.com User , 22 years ago
This book is written beyond amazing. The writing is exquisite, and I reccomend it to anyone who is willing to last through a slow moving but very intriguing book. Second best by Peter Straub directly after Ghost Story.

Creepy even in daylight!

Published by Thriftbooks.com User , 23 years ago
The second book i read by Straub, and one of the perhaps 5 books that is able to unnerve me even at midday with the sun streaming in. Perhaps more abscure than some of his other works, but i would whole heartedly recommend it. Also, check out Ghost Story, Shadowland, and Talisman (with S. King).
Copyright © 2020 Thriftbooks.com Terms of Use | Privacy Policy | Do Not Sell My Personal Information | Accessibility Statement
ThriftBooks® and the ThriftBooks® logo are registered trademarks of Thrift Books Global, LLC