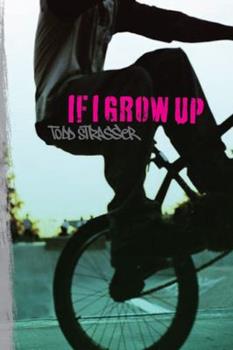 If I Grow Up

In a gripping novel with a plot pulled from the headlines, Todd Strasser turns his attention to gang life in the inner-city projects. DeShawn is a teenager growing up in the projects. Most of his friends only see one choice: join up to a gang. DeShawn is smart enough to want to stay in school and make something more of himself, but when his family is starving while his friends have fancy bling and new sneakers, DeShawn is forced to decide--is his...

Published by Thriftbooks.com User , 12 years ago
If I Grow Up is one of those books that many people will not be able to relate to at all because their lifestyle is so different but will be sucked into regardless. I picked If I Grow Up randomly, just because I was bored and wanted something different, but it turned out to be one of the most eye-opening books I'd read in a while. Life in the projects, gangs, and everything that accompanies gangs, is something completely foreign to me. Sure, there's violence around here but nothing on that level. If I Grow Up really gives an insight on what goes on, the people behind the gang, and the feelings that go with it. I'd never really thought of the people who live that lifestyle as "good" guys but after reading this, quite a few of my opinions changed. The characters, like the whole book in general, were completely foreign to me in most ways. The way girls were treated and acted, the way they treated relationships, everything was just the complete opposite of what I was used to. But, they also felt the same emotions everyone does - lust, crushes, fear, sadness - all of those things were there and added a whole new dimension to the characters. Overall, I highly recommend this . It flies by and you will barely recognize that you're reading - it's that good. The ending will shock you too.

Richie's Picks IF I GROW UP

Published by Thriftbooks.com User , 12 years ago
"It seemed like everything in Washington Carver was held together with tape. The cracks in the grimy windows, the pages in the tattered old textbooks, the pull-down maps in the front of the room -- all held in place with yellowed, peeling tape." I am a life-long fan of learning history. It helps me understand why and how America is how it is. This doesn't mean that studying history doesn't often lead me to feelings of anger and despair. What might it take today to repair things for those who have gotten stuck -- for generations -- with the short end of the American Dream? Guaranteed that in the coming years, some fortunate, twenty-first century middle school kids (undoubtedly in a well-financed, suburban school district somewhere) are going to end up with a teacher who turns them onto IF I GROW UP and leads them through an extended study of American history focused on why such dangerous and dysfunctional neighborhoods/ communities/ housing projects have come to exist in the so-called greatest and wealthiest nation in the history of the world, and why such neighborhoods have not only perpetuated but have continued to grow as those on the outside say, "No new taxes, you're on your own." "Wham! Jules swung his arm out hard, catching Terrell square in the face. My friend fell back, and the pistol clattered to the ground about five feet away. Jules rose to his hands and knees. He looked at the gun; then he looked at me. "I knew what he was thinking. "He lunged for the gun. For a kid who'd just been shot in the foot, he moved pretty fast. "But I was faster, scooping up the gun and aiming it down at him. This was the first time I'd ever held a real gun, and even though it was small, it weighed more than I'd expected. My heart was hammering and my hand trembled, but I willed it to stop. "Still on his hands and knees, Jules looked up at me uncertainly. Then, out of nowhere, a different sensation took hold. With that gun in my hand, I began to feel powerful in a way I'd never felt before." Todd Strasser's IF I GROW UP offers a horrific view of an inner city society that is dominated by gang activity. The absence of inner city dialect and objectionable language makes this a high-interest book that can, indeed, be shared in the middle school classroom. The story is told by DeShawn, a talented student, insightful young man, and decent human being, from the time he is twelve through his being seventeen. DeShawn's mother had been the innocent victim of gang violence; he now lives in a crowded one bedroom apartment with his grandmother, his sister Nia, and Nia's ever-growing brood of fatherless offspring. No matter what he does or does not do, DeShawn is dragged deeper and deeper into the same morass as those around him. As with his story about homeless kids, CAN'T GET THERE FROM HERE, Todd Strasser gives us an in-your-face look at how the other half lives. IF I GROW UP is a hell of a story for all of us who have no clue as to what kind of daily live

Published by Thriftbooks.com User , 12 years ago
When you live in the projects and are faced daily with gang violence, drive-by shootings, teen pregnancy, and poverty, the chance of growing up and living a decent life as an adult dwindle with each passing year. Todd Strasser takes readers into the life of one teen living in just such a world. DeShawn lives with his grandmother and his sister. His grandmother cleans for a living, but even though she's not old by the suburbs' standards, she is old and tired here in the inner city. DeShawn goes to school and wants to stay on the straight and narrow, but everyone he knows is involved in gangs or drugs, so the pressure is on. IF I GROW UP starts when DeShawn is twelve years old. As each year passes he finds it more and more difficult to keep focused on the things he needs to do to find success in the world most of us know. The pull of the gang lifestyle, with its promise of money and power, are tempting. Being part of the Disciples would guarantee there would be food on the table, diapers for his sister's twin babies, and money for the rent every month. When it becomes evident who was responsible for the death of a young child, DeShawn struggles with a feeling of needing to even the score. That's part of the curse of gang life. Once there is one killing, everyone wants to seek revenge, which creates an out of control spiraling effect with one drive-by shooting after another. Is DeShawn the one to beat the odds and stay in control of his life by staying in school, getting a decent job, and making his family proud, or will he end up like the rest of the young boys and men of the projects? Todd Strasser examines the tragedy of life in the inner city. The statistics reveal odds stacked against the youth of our cities. Strasser is able to paint a realistic picture of this tragic world, but at the same time he keeps this novel free of the extreme use of foul language, explicit sex, and graphic drug use most novels of this type usually employ. This makes IF I GROW UP a story that can be shared and discussed in any classroom setting. I plan to use it as a read-aloud with my students to help them appreciate how lucky they are to be growing up in a rural, small town atmosphere. Reviewed by: Sally Kruger, aka "Readingjunky"
Copyright © 2020 Thriftbooks.com Terms of Use | Privacy Policy | Do Not Sell My Personal Information | Accessibility Statement
ThriftBooks® and the ThriftBooks® logo are registered trademarks of Thrift Books Global, LLC