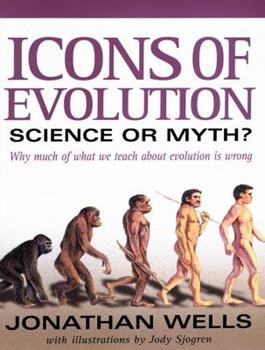 Icons of Evolution: Science or Myth?: Why Much of What We Teach about Evolution is Wrong

How would you react if told that you and your children have been lied to in science lessons at school and university? Yet this is exactly what has been happening for decades, as Icons of Evolution' demonstrates. The author, a Berkeley Ph.D in Biology, is not a creationist, but his book describes many serious misrepresentations of facts commonly found in biology textbooks, which are used to perpetuate belief in evolution. The main part of the book...

An intriguing book that deserves a fair hearing...

Published by Thriftbooks.com User , 19 years ago
Wells has written a fascinating book about how biology textbooks use outdated evidence for evolution that modern evolutionary biologists no longer accept. Whether one agrees or disagrees with Wells' overall point, his book is carefully argued and thoroughly documented by references to the primary scientific literature, and it deserves a serious look by anyone interested in contemporary debates over evolutionary theory. Unfortunately, many of the published criticisms of Wells' book seem to rely on ad hominem attacks or straw-man arguments. Some of the reviewers don't even seem to have read the book. For example, one reviewer asserts that according to Wells peppered moths "never" rest on tree trunks. But Wells does NOT make this claim in the book (and he doesn't use the word "never"). Wells' claim is only that such moths RARELY rest on tree trunks, a conclusion that he amply supports from the relevant scientific literature. This more nuanced claim still undermines the standard textbook use of the peppered moth story. By the way, Wells' critique of the peppered moth story is fully corroborated in Judith Hooper's new book, Of Moths and Men, which goes into great detail about problems with the original moth experiments. It is interesting to note that after Wells' book came out, new editions of certain biology textbooks removed both the peppered moth story and Haeckel's fudged embryo drawings. Don't allow Wells' critics to poison the well by misstating Wells' arguments. Read the book for yourself and make up your own mind.

Very angry after reading this book.

Published by Thriftbooks.com User , 21 years ago
Until recently I was solidly in the Darwinist camp, and I couldn't even imagine what could ever change my mind. I was raised with a Darwinistic world view. As an undergraduate, I took a science major where the rules of science were emphasized and I was privileged to attend lectures where one of the greatest living scientists explained to our philosophy department how science works.Recently however, I read Johnson's Wedge of truth, and Well's Icons of Evolution. I was outraged to read about the thin evidence, sloppy evidence and yes, even outright fraud that are presented by Darwinists as the pillars of Darwinsim. I feel a great sense of betrayal that these case studies were presented to me as fact when in one instance the fraud has been known for generations. At best what Wells presents is negligence on the part of text book writers, at worst it is the widespread systematic suppression of dissenting opinions. ...

Conversion of a former Darwinist

Published by Thriftbooks.com User , 21 years ago
I must admit that reading this book was somewhat shocking. I had expected to see rehashed creationist arguments about the Second Law of Thermodynamics and the lack of transitional forms in the fossil record. On the contrary, nothing Wells says depends on creationist ideas. He has collected evidence from the mainstream, peer-reviewed scientific literature, and combined them into a compelling case against what we might call "textbook Darwinism." This might be a trivial accomplishment, since the record of high school and college textbooks is generally dismal. But his cumulative argument seems to me devastating to orthodox Neo-Darwinism, since it just is textbook Darwinism. Wells discusses the famous comparative vertebrate embryo diagrams-- which should be an embarrassment to any textbook author who includes them--the fallacious way homology is used for evidence of common ancestry, the collapse of the story of Peppered Moths, Darwin's finches, and many more pieces of the Darwinist lore. By the time I was finished, I had lost faith in almost everything I thought I knew about evolution. I now suspect that Darwin will soon join company with Marx and Freud.I'm not sure what I believe at this point, but I can no longer buy the official story. I don't know if I agree with some of Wells' recommendations in his conclusion, but something clearly has to be done. Hysterical defenses of falsified "evidence" by Darwinian disciples at Talk.Origins and elsewhere convinces me that they didn't see this coming, and won't be able to deal with the actual facts involved.

Published by Thriftbooks.com User , 21 years ago
Jonathan Wells received a Ph.D. in Biology at Univ. of Cal. at Berkeley. He also has a Ph.D. from Yale. He has written a book for the general audience that is both accurate and informative. Having researched evolution for almost 10 years and having read over 60 books on the subject, I confess that I find Wells' book straightforward and balanced, and I consider it a breath of fresh air. Wells presents the 10 idols of evolution, i.e., the 10 most frequently cited evidences of the "truth" of evolution, and demolishes their evidentiary value by citing the latest research in the field of evolution. For example, he shows the standard illustration of Haeckel's famous "similarity of vertebrate embryos," and then notes that the technical science literature in 1998 admitted that the illustrations are fraudulent -- that they were more the product of Haeckel's mind than of nature. I think it is important to note here that Haeckel's "similarity of embryos" drawings have been in textbooks for almost 100 years. Wells also discusses Kettlewell's "peppered moth" experiments (also known as "industrial melanism"). Wells cites to the technical science literature, which admitted in 1998 that these famous experiments, which can be found in all science textbooks published in the last 50 years, have little or no evidentiary value. He shows that the "peppered moth" observations do not in fact show "evolution in action," contrary to what is written in all biology textbooks. Wells does a service to both the common man and the scientific community by showing that the staple evidence of evolution (i.e., the above two, as well as eight others) is not evidence at all. Wells performs this task superbly. He supports his arguments and conclusions with facts, citations and quotes from recently written and published scientific articles. For example, he cites time and again from articles that were written and published in 1999 and 2000. Don't be put off because of Wells' reliance on technical scientific journals. Wells exposition is simple and easily understandable to the lay reader. His arguments are cogent. I highly recommend this book to anyone with an interest in science generally and evolution specifically. I specially recommend this book to those who really believe the received wisdom that evolution is a "fact."

Published by Thriftbooks.com User , 21 years ago
Reviewer Adrian Melott seeks to spice up the close to her November 13 review with the rhetorical question: "Need I say more..."Well, golly Adrian, I guess not. What you've said already betrays your violation of the Cardinal rule of journalism: "never write a review of a book you haven't read"Adrian's review pooh-poohs Dr. Wells for citation to John Kasting as "supporting" the claim that the early earth atmosphere contained no free oxygen. Had Adrian actually read the book, however, she would have known that Dr. Wells clearly reported that Dr. Kasting "agreed with (Texas scientists) Berkner and Marshall" that oxygen in the primitive Earth atmosphere "could not have exceeded about one thousandth of its present atmospheric level".Dr. Wells' book quite readily acknowledges the strong academic argument about the makeup of the early atmosphere. Two pages after accurately recording Dr. Kasting's opinion on the matter, he quotes the 1996 opinion of Smithsonian Institution paleobiologist Dr. Kenneth Towe that "the early Earth very likely had an atmosphere that contained free oxygen." Had our hapless reviewer been quicker to read the book than to rush the posting of her cutesy insult, she would have noticed that the dispute as to the free oxygen content of the early atmosphere is chronicled by Dr. Wells only as the prelude to the main act: the existence of free oxygen isn't the problem, it's the methane-ammonia atmosphere so necessary for the experimental synthesis of amino acids that couldn't possibly have existed. To quote Carnegie geophysicist Dr. Philip Abelson "what is the evidence for a primitive methane-ammonia atmosphere on Earth? The answer is that there is NO (emphasis in original) evidence for it, but much against it".What is it about this book that causes priestesses of materialism to so dogmatically attack it without first reading it? Buy a copy, read it for yourself and see if you don't agree that the icons of evolution are more myth than science.
Trustpilot
Copyright © 2022 Thriftbooks.com Terms of Use | Privacy Policy | Do Not Sell My Personal Information | Accessibility Statement
ThriftBooks® and the ThriftBooks® logo are registered trademarks of Thrift Books Global, LLC