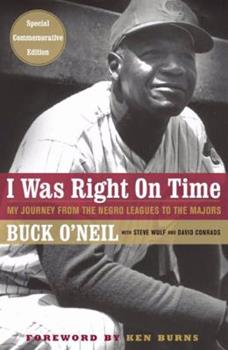 I Was Right on Time

From Babe Ruth to Bo Jackson, from Cool Papa Bell to Lou Brock, Buck O'Neil has seen it all. As a first baseman and then manager of the legendary Kansas City Monarchs, O'Neil witnessed the heyday of the Negro leagues and their ultimate demise. In I Was Right on Time, he charmingly recalls his days as a ballplayer and as an African-American in a racially divided country. Whether he's telling of his barnstorming days with the likes of Satchel Paige...

Got To Give It Up

Published by Thriftbooks.com User , 15 years ago
This is not simply an autobiography, but an oral-history on where we have been and where we are going. It was written from the heart, and - if you read closely - it will open yours to live life in a different, better way. I read the book when it was initially published and recently purchased the soft-cover edition. Rarely do I re-read a book, but I felt the need after hearing Buck O'Neil's moving and uplifting speech this summer at the Baseball Hall of Fame and listening to a rebroadcast of an interview conducted several years ago by radio sports-talker Jim Rome. The road to racial equality remains long and steep, but by gazing upward you may view what appears to be a finish-line tape rippling in the breeze at the top of the mountain. But look ahead and you see the harsh reality that the road remains unfortunately rugged, with many twists & turns. Buck O'Neil is an American hero and if your eyes are dry after reading the last page of I Was Right On Time (no matter how many times you read the book), then your heart may not have opened up wide enough to tackle the journey ahead.

Buck is a great ambassador for baseball

Published by Thriftbooks.com User , 17 years ago
I knew about Buck O'Neil from Ken Burns, Baseball series. Unfortunately, I did not see much of it. The past month I heard an interview with Buck O'Neil on the radio. He was such a gracious man and kind. I knew I wanted to read his book. His book is wonderful. It is great to get insights and details of the negro leagues of the past. Like all of us, past memories tend to change and brighten over the passage of time. I see this book as an uplift. His attitude is wonderful and is an inspiration to everyone. No matter where we are or when we are born, we are "right on time". We all are serving a purpose for a greater good. The book does read like you are sitting right next to Buck and he is talking with you. I highly recommend this book to all baseball fans as it gives a glimpse into the baseball history. The negro leagues are such a big part of this history. I do believe some of the greatest players were in the negro leagues. As a baseball fan, I plan to read other books on the negro leagues to learn more about it. I became a member of the Negro League Baseball Museum because of this book. I hope to get a chance to see it someday. You can't help getting touched by this book and the simple message of graciousness and love it has throughout.

The Ambassador Of the Negro Leagues

Published by Thriftbooks.com User , 18 years ago
I was impressed with this book and its author long before I had the honor of meeting Buck O'Neil.Mr. O'Neil gave up a $4.000.00 speaking engagement to come to Humboldt,Kansas and speak free of charge.The author writes of his years playing and managing the Kansas City Monarchs.He tells stories about Satchel Paige and Jackie Robinson.There is no one better qualified to write this book about his life and how segregated baseball and life was then.Mr O'Neil helped found and lead the Negro League Baseball Museuem In Kansas City, Missouri.Mr O'Neil is one of only about 300 Negro League ballplayers still living and one of only about four still living who played in the Negro Leagues in the 1930s.Mr O'Neil is a treasure and his book tells the story.

Published by Thriftbooks.com User , 19 years ago
this Book reflects so much to me overall.Buck O'Neil is a special figure in any sport too me.He is somebody that whenever He is on tv I have too stop what I'm doing & listen.this Book is the same way for me.so many great stories & reflections of what He went through & all of the Great Players He played with & against is mentioned here.listening too Him is like having a Family Member telling you stories that you could listen too for a whole day non-stop he moves me.

Published by Thriftbooks.com User , 20 years ago
Buck O'Neil is a man with a story to tell - one of courage, hard work, joy, love, and history. Homespun, told as if Buck was sitting across from the reader, O'Neil reveals the bright side of a very sad period of history where great players were denied the opportunity to compete in the Major Leagues simply because of the color of their skin, but where great competition and inspiration occurred on the backroads and big cities of America as members of the Negro Leagues played all over the Western Hemisphere.Buck refuses to be sad over the lost opportunity of playing in the Majors, but instead revels in being able to play with and against some of the finest players in the history of baseball. Because so many of his contemporaries had this same spirit, they enjoyed their lives and ended up paving the way for the Major Leagues to be integrated. This event is so much more than a mere baseball event, but an event that changed America in a great and grand way!Reading this book was inspirational to me, and let me see that no matter what the circumstances, good can be found if you look for it. Buck is a person who reveals the secret of life - love others.
Trustpilot
Copyright © 2022 Thriftbooks.com Terms of Use | Privacy Policy | Do Not Sell My Personal Information | Accessibility Statement
ThriftBooks® and the ThriftBooks® logo are registered trademarks of Thrift Books Global, LLC