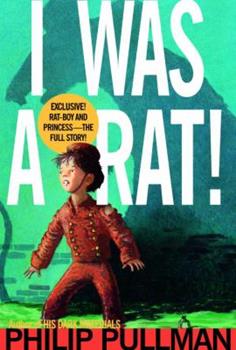 "I Was a Rat " So insists a scruffy boy named Roger. Maybe it's true. But what is he now? A terrifying monster running wild in the sewers? The Daily Scourge is sure of it. A victim of "Rodent Delusion"? The hospital nurse says yes. A lucrative fairground freak? He is to Mr. Tapscrew. A champion wriggler and a budding thief? That's what Billy thinks. Or just an ordinary small boy, though a little ratty in his habits? Only three people believe this...

THE BEST BOOK BY PHILIP PULLMAN

Published by Thriftbooks.com User , 19 years ago
THE BEST BOOK PHILIP PULLMAN EVER WROTE WAS I WAS A RAT. IT IS A GREAT BOOK BECAUSE IT HAD A LOT OF DETAILS, EXPRESION, MYSTERY WORDS, AND FEELINGS. IT CAN GRAB YOUR FEELINGS IF YOU READ THE THE BOOK. IF YOU LIKE TO SOLVE MYSTERIES THEN THIS IS THE BOOK FOR YOU. ALL OF YOU OUT THERE HAVE GOT TO READ THIS BOOK. WHEN YOU GET AT THE END YOU WILL WANT TO READ MORE ABOUT IT. IF YOU DO WANT TO READ MORE ABOUT IT THEN DO A SEARCH AND SEE IF THERE ARE MORE BOOKS THAT PHILIP PULLMAN WROTE - THEY ARE VERY INTERESTING.

Published by Thriftbooks.com User , 19 years ago
Pullman's "I was a Rat" is an excellent critique on the social and political system of the day. Hilariously funny and mockingly accurate, a super read! But then I love Pullman anyway!

News Headline: I Was A Rat Is Great!

Published by Thriftbooks.com User , 19 years ago
I Was a Rat, by Philip Pullman seems like a very weird story. The story starts with a cobbler named Bob and his wife, Joan. And when a little pageboy knocks on their door, they take him in, but this is no ordinary boy. Whenever they ask this boy where he's from he just says, "I was a rat." This boy thinks that he was a rat who turned into a boy; but Bob and Joan think that he is a normal boy that is a little ratty in his habits. Bob names this little boy Roger and soon after, Bob and Joan find that Roger chews whatever he can find, he rips apart his bed sheets with his mouth and eats pencils. Whenever he sees the story in the newspaper about Princess Aurelia, he says that she is his sister. When Roger, a very mischievous boy gets sent to school for the first time, he gets into a lot of trouble. At first nobody believes his story. That starts to change when he is taken in Mr. Tapscrew, a person who makes Roger into a lucrative fairground rat-freak. After people find out that the famous rat-boy is just a boy in a suit, Roger escapes and meets a boy-thief, Billy, who thinks Roger is a next-generation thief and gets Roger into huge trouble. After this Roger escapes to the sewers. During all this, Bob And Joan cannot find Roger, whom they think is lost. Rumours start to grow about a monster surrounded by rats in the sewers. When The Daily Scourge, a scandal style newspaper struggling to find a new story other than "The Wedding of Princess Aurelia and Prince Richard" finds out about these rumours, they suddenly have a great Story-"MONSTER FOUND IN SEWERS!" When this monster is captured, the daily scourge exaggerates everything that happens. They tell the government to "Kill the Pure Evil Monster" and they make everyone afraid of the rat-boy in the sewers. When Bob reads in the paper about the extermination of the monster, he and Joan do think that this "monster" is just the little boy, Roger, and they do everything they can to convince the public that this boy is not a monster.This story is about the power of the press over the public, and how easily the public can be deceived. It also reminds us about how much the media can exaggerate and that not everything you hear or read is true.This story is very touching, exciting and funny at the same time, if a bit hard to follow. This is a great book and you should read it.

Published by Thriftbooks.com User , 21 years ago
Mix together the Untold Secrets of the Cinderella story, alittle Dickens, some satire of the tabloids, a jab or two at the royalfamily, and a little boy who tries to be good although he is, admittedly, a bit ratty in his habits, and you get a book that's new and funny and charming.For adults, much of the fun comes from figuring out early on that the boy who arrives on the doorstep of Bob (cobbler) and Joan (washerwoman) is Cinderella's rat-footman who was busy playing soccer in the castle when the coach and horses went back to being a pumpkin and some mice. For children (mine at least), the book transfixes even if (in the case of my youngest) the secret of Roger's rattiness remains a mystery. And Roger's rattiness itself delights: he likes to gnaw and nibble -- bits of leather, tassels, bell-ropes. The way he looks at these chewables makes my mouth water. I'm glad that at the end of the book he's still a bit of a nibbler -- although much improved, as Bob is proud to point out.These are good reasons to run out and get this book; but they're not the only reasons or even the best. *I Was a Rat* has a depth that many excellent books lack. It's a book about growing up, about moving away from instinctual ratty behavior to being a good child. And it's hard to be a good child. Grown-ups are a strange breed who impose strange rules; they punish children for curious reasons. O.K., you may not have eaten your teacher's pencils, but what about the paints that you innocently spilled all over the rug? This book is about growing up and about how it's a hard journey that's never entirely completed. As Mary Jane (Princess Aurelia to us) points out at the end, even wishes coming true can complicate matters.*I Was a Rat*, however, leaves us cozy and warm. Roger is with Bob and Joan, who have learned what it is to be parents. They sit around the hearth as a family and the world, "a difficult place", is outside, but they have "toasted cheese and love." Who could ask for more?

Be careful what you wish for, it may come true!

Published by Thriftbooks.com User , 21 years ago
I just completed a one afternoon read of "I Was a Rat." Couldn't put it down. I had the same experience with the Harry Potter books. Philip Pullman is a master of satire, adventure, and mystery. This sequel to Perrault's Cinderella story is as much an adult book as an intermediate grade-school book as listed. Some call it Dickensian because of the many twisted misadventures the amnesiac hero experience as he stumbles through the streets of English society. It's fun to gradually recognize the familiar "Cinderella" story unravel as the answer to the puzzle of rat-boy's origin. After the Princess solves the mystery, confesses her doubts about her life with the Prince, and proves to be kind to those in need, I saw a similarity to the life of Princess Diana. See if you feel the same.A moral lesson or two or three can be explored and embraced if your experiences and psycho/social needs warrant them. Can we believe what we see and hear? Should we trust ourown perceptions or those of the press and politicians? Is inclusion a safe policy? Shouldn't those 'out of the norm' be put away for the safety of all? What about old habits and innate genetic predispositions? Can an individual given love and patient guidance choose to overcome antisocial behaviors? Should we follow our hearts? - after all, Cinderella (now that we know what really happened) and Princess Diana did and look what happened to them.Most of all, of course, it's unique, fast moving and fun. A great book to read to kids from 7 to 107.
Copyright © 2020 Thriftbooks.com Terms of Use | Privacy Policy | Do Not Sell My Personal Information | Accessibility Statement
ThriftBooks® and the ThriftBooks® logo are registered trademarks of Thrift Books Global, LLC