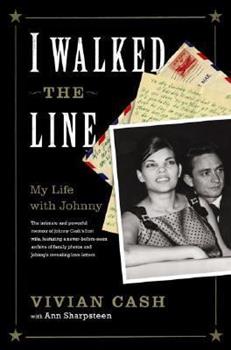 I Walked the Line: My Life with Johnny

"I Walked the Line" is a chronicle of first love, long-kept secrets, betrayal, forgiveness, and the truth--told at last by Johnny Cash's first wife, the mother of his four daughters. It is a book that had the full support of Johnny Cash, who insisted it was time for their story to be told, despite any painful revelations that might come to light as a result. Many myths and contradictions regarding the life of Johnny and his family have been perpetuated...

A lot of people loved Johnny Cash; but did anyone love him more than did Vivian?

Published by Thriftbooks.com User , 12 years ago
This is a wonderful book and shows a different side of Johnny Cash that was not seen by his many fans. The marriage between Johnny and Vivian had a lot more to it and lasted a lot longer than many realize. First of all there were three years ,while Johnny was in Europe in the Air Force that they were deeply in love ,communicated almost daily,developing and expanding their love before they were married.This was before Johnny's career in music even started or had they any idea of what a famous life was ahead for them. Through the letters we see the deep convictions Johnny had about life in general,his extremely deep faith,and deep love for Vivian.We also see the deep love that Vivian had for Johnny.Then came marriage and the unbelieveably rapid rise to music fame,the endless days away on the road,the lifestyle that came with it ,including the drinking and drugs,the raising of four children during thirteen years of marriage. Although Vivian continued to love Johnny through these years,and remained faithful to him,she was unable to keep him from falling in love with June . She continued to love him all through the years and ,unbelievably never really seemed to allow hatred to consume her or even develop a hatred for June. It is hard to believe that Johnny would walk away from her,and there seems to be little reason that he ever had any hate for her ,even till the last years of his life. What this book really shows, is that these people who make their living in entertainment world,lead such a complicated and driven lifestyle that few of us fans can even imagine.They give all,body and soul for the things that fame brings and in many,many cases lives are wrecked along the way.The price of fame comes very high and there is often heartache for themselves and family. Yes,there is also a lot of happiness as well.But in many ways their lives get taken over by the "legend". It is easy to criticize others,but until one walks in their shoes,we shouldn't.The people who bring us so much happiness with their art deserve all the wealth and happiness they are able to get out of their fame;and instead of criticizing anyone or anything they do;we should just stop and think what a price they pay,and what a dull world it would be without them. When I finished this book a couple of thoughts came to mind.Kris Kristofferson once said something to the effect about Johnny Cash that went something like this"He was a walking contradiction-partly truth and partly fiction".Then there's George Jones's song "Who's Gonna Fill Their Shoes"?. A special thanks to Ann Sharpsteen for helping Vivian getting her story out to us ;and it just goes to prove that Superstars and Legends are real people too;and like the rest of us go through life's trials and tribulations,but even on a much greater scale.

Another, Vital Take on an Oft-Told Tale

Published by Thriftbooks.com User , 14 years ago
Innocent viewers of James Mangold's film "Walk the Line" (2005) could leave it thinking that, somehow, Johnny Cash's first wife Vivian--the mother of Rosanne, Kathy, Cindy, and Tara--was "the other woman" to the man's only real love, June Carter. This book, written with Cash's encouragement before he died, tells another side to the story (and in real life, such stories have many, many sides). The heart of the book--some 247 pages--are Cash's love-letters to his girl friend and fiancée (1951-54), many written while he was serving in the military. A number are reproductions of telegrams, typescripts, and letters in Cash's own hand. The contents are so personal--Cash was infatuated with his lady, head over heels--that to read them feels an intrusion. Vivian brackets these letters with family photographs, her own remembrance of good times and bad, her candid feelings toward June, and her and her former husband's coming to terms with life near its end for them both. This is a book that nearly wasn't written--friend and coauthor Ann Sharpsteen practically had to coax it out of a very private person--but we can be glad that it was. And just in time: Sharpsteen tells us that Vivian died two weeks after completing the manuscript in 2005.

Published by Thriftbooks.com User , 14 years ago
I found this book to be a very poignant telling of a remarkable love story. It is obvious from Johnny's letters to Vivian that he was deeply in love with her and she with him. Unfortunately, like all things, situations change. It is a tale of a story of love, hope, and faith. After Johnny's addiction to pills, it became a story of deceit, dishonesty, and unfaithfulness. I'm sure it was a very painful for Vivian to tell her story. I was in tears by the end of the book. I am thankful that she found the healing and the peace she obtained by writing it.

Life is life...truth is truth.

Published by Thriftbooks.com User , 14 years ago
Okay, I realize you may think I'm prejudiced, but I WAS THERE and also lived this story. Even Dad (JOHNNY CASH) and June made it public in one of their last interviews that this story IS TRUE...they admitted to it. This is my MOTHERS story...like it or not, she tells the truth and I applaud her for her courage. Not only did she completely keep her story to herself for almost FORTY years, I was there when Dad gave her the go ahead, and HE asked her to not leave anything out. Her intention was NOT to slam June...it was simply to tell the truth. It happened, take all 3 of my parents off the pedistal and remember they were human beings. Dad lived because he wanted to. God is what got him through the worst times. My parents were married 13 years and had 4 children together. IT wasn't exactly a one night stand! They were together from 1950 to 1966!! I expected some people to have a negative reaction, but some of these reviews are pretty hate filled.. THREE of our 4 parents are gone. Please remember, your words are hurtful for the ones here left behind that grieve for them daily. VERY HURTFUL. If you want to critique the BOOK, that's one thing, just don't critique my Mother who you didn't know at all. She was an amazing and very loving woman that had her heart broken, and loved a MAN for over 50 years! A MAN...MY DAD...not Johnny Cash. He was a HUMAN BEING, Okay? You aren't required to like the book, but show a little kindness in regards to my Mother , please. ~Kathy Cash

Published by Thriftbooks.com User , 14 years ago
In this book, Vivian says something very close to the effect of "He went from my arms to God's arms. Anything that happened in between just wasn't supposed to happen". That about says it all. While I can't - in good conscience - insult June Carter Cash (I happen to love her songs and think she had an adorable public personality), I also can't be one of those lemmings who refuses to face reality and truth. While Johnny and June had a loving and happy marriage, there was a love story and happy marriage BEFORE that one and it's high time that story was told. To that I say: Thank you, Vivian!! 90% of the book does consist of love letters that Johnny wrote to Vivian while in the service in Germany. Those letters paint such a magnificent picture, you don't even miss Vivian's "side" of the correspondence. By turns, Johnny was loving, longing, lonely, angry and apologetic but ALWAYS did his absolute adoration for Vivian come through loud and clear. If he said it once in his letters, he said it - quite literally - a thousand times "I love you" and "You're the only one for me, Vivian". Vivian loved this man and he absolutely adored her. They maintained a steady, loving relationship while enduring a three year separation. They married and produced four wonderful, sweet daughters. Vivian encouraged Johnny in his music, stayed by his side and reveled in his phenomenal success. Vivian was promised love, steadiness and faithfulness. When these promises were not only broken - but painfully shattered - she did the only thing she could do. She gave a divorce to the love of her life for the sake of stability and sanity in her home in which to finish raising her daughters. While it's a sad fact that June Carter was "the other woman" who caused this heartache and a tragic end to a promising love story, it is - in truth - a fact. I applaud Vivian - and Ann Sharpsteen - for taking this painful journey and allowing us all to have a glimpse of the very first love story and marriage of Johnny Cash. Any TRUE fan of Johnny Cash' will appreciate this important labor of love.
Copyright © 2020 Thriftbooks.com Terms of Use | Privacy Policy | Do Not Sell My Personal Information | Accessibility Statement
ThriftBooks® and the ThriftBooks® logo are registered trademarks of Thrift Books Global, LLC