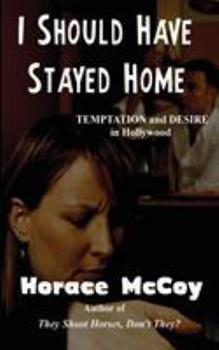 I Should Have Stayed Home

TEMPTATION and DESIRE in Hollywood Ralph Carston, a handsome young man from Georgia, and roommate Mona Matthews work as extras and dream of Hollywood stardom when a courtroom fracas by Mona gives them a flash of notoriety. This leads to a swank Hollywood party and an introduction to Ethel Smithers, a rich older woman with a less than pure interest in Carston.

Published by Thriftbooks.com User , 19 years ago
This isn't as good as Nat West's Hollywood tale entitled Day of the Locust, but then nothing is. Nat West was in a different league as a writer, much higher on the scale, etc., but that shouldn't keep you from enjoying McCoy's take on LA LA. I'm a McCoy fan from way back, and what's sad is there you are wanting him to be as good as West or Hemingway or Hammet, et al, as a writer, and there is just no way. Don't get me wrong, McCoy does the best that he can with the gifts that he had...and one simply has to settle for it. What may have hurt him as a writer early on is the fact he wrote for the pulps...but then again so did Raymond Chandler and he didn't end up anything less than a first rate type of novelist--even though he worked in the private ... genre.Bottom line: Enjoy McCoy for what he has to offer--and what he's got to offer isn't all that bad either. An easy read and a cautionary tale: It's okay to have dreams, but don't throw your life away chasing after something that isn't likely to happen. And yet, we can relate: who hasn't got a dream or two they would like to see happen? It's part of being human. Horace McCoy never made it as an actor in real life, the reason he came out to Hollywood in the first place, but he did end up working on over one hundred B-flicks as a screenwriter. With that many credits to his name one imagines the man was able to make a decent living, that's a lot better than the thousands of other lost dreamers roaming the streets of The Glitter Factory. Four stars is a fair appraisal. We remain a McCoy fan.

Published by Thriftbooks.com User , 19 years ago
After his huge editorial problems following the writing of his powerful "No Pockets in the Shroud", McCoy comes back to the Hollywood circle and builds a solid story starring a twin brother of Robert "They shoot Horses..." Syverten, Ralph Carston, a more muscled character - as McCoy himself was - but as naive as him, who came from his Southern home to become an actor - as McCoy himself did. He shares a small bungalow with a young pretty girl, Mona Matthews. This time they try to get in movies attending not marathon contests, but luxurious cocktails. But his accent doesn't give Ralph the opportunity to break in movies. He meets a rich old woman who falls in love with him but doesn't do anything for him to succeed as an actor. Naive and stubborn at the same time, he keeps wandering in Hollywood as Mona leaves the city after showing too much in the studios and wasting all of her chances to succeed.McCoy's painting of Hollywood in the 30's is still valid. It's not as sober and successful as "They shoot Horses..." but it's still very realistic, contemporary and well-described, with a real dramatic intensity. It's a novel which reflects not only what McCoy saw in Hollywood (where he worked as a screenwriter from 1933 to the end of his life), but also his own disillusions: he came to Hollywood in 1931 to work as an actor and a screenwriter but failed as an actor, because of his accent.Begun with "They shoot Horses, don't they?", McCoy's Hollywood "dilogy" ends with this short book where the writer invests himself mainly in Johnny Hill, an attractive, realistic character able (like Mike Dolan did in "No Pockets in a Shroud") to anticipate World War II.

Published by Thriftbooks.com User , 21 years ago
I have no idea what "Simpleminded and Obvious" is talking about. This was a truly enjoyable book - I read it in one sitting, and didn't want it to end. The style is sharp, perceptive, and seemingly effortless. I also found the storyline remarkably contemporary.

Published by Thriftbooks.com User , 22 years ago
Horace McCoy is simply one of the finest stylists to have operated in the noir form. He was a conflicted fellow who felt he ought to be a variation on Fitzgerald but who was actually blessed with a fine talent for something very different from his hero. This conflict tortured him(and led to a couple of bland but very successful mainstream novels) but resulted in three of the great books of noir---I Should Have Stayed Home, They Shoot Horses, Don;'t They? and Kiss Tomorrow Goodbye. He was a true poet of the grim reality and horribly neglected .
Copyright © 2022 Thriftbooks.com Terms of Use | Privacy Policy | Do Not Sell My Personal Information | Accessibility Statement
ThriftBooks® and the ThriftBooks® logo are registered trademarks of Thrift Books Global, LLC