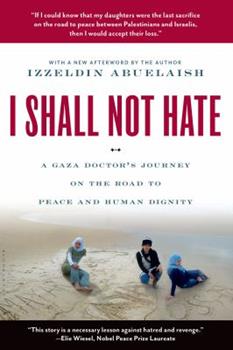 I Shall Not Hate: A Gaza Doctor's Journey on the Road to Peace and Human Dignity

NATIONAL BESTSELLER Search for Common Ground AwardMiddle East Institute AwardFinalist, Sakharov Prize for Freedom of ThoughtStavros Niarchos Prize for SurvivorshipNobel Peace Prize nominee A necessary lesson against hatred and revenge -Elie Wiesel, Nobel Peace Prize laureate In this book, Doctor Abuelaish has expressed a remarkable commitment to forgiveness and reconciliation that describes the foundation for a permanent peace in the Holy Land. -President...

Between a Rock and a Hard Place

Published by Thriftbooks.com User , 12 years ago
The first 13 years of Izzadeen Abulaish's life were spent in extreme poverty under Egyptian rule. Like other camps in Arab countries Gaza was used as a pen for Palestinian refugees to prevent them from mixing in with and becoming citizens of the nations to which they fled. There is an interesting segue (pp 39) where, at age 11 he goes on trading trip with a cousin to Cairo selling socks and gets to see big city lights for the first time. After 1967 under Israeli occupation things improved. Unlike the situation with Egyptian administration (odd that Egyptian military control, reputedly much harsher is described differently) Israelis were interested in coming as tourists to the Gaza strip and in development and Izzadeen was able to earn some money for the family selling fruit. At 15 he found work one summer on a farm in Israel and became friends with his Israeli hosts, renewing the acquaintance many years later. One of the things that stands out, common to many people who are well centred in later in life, is that he experienced a good teacher (Grade 7 English, among others) who encouraged him to stay in school and continue learning. As a young adult he was able to go to medical school in Cairo, then later in 1988 to study obstetrics and gynecology in Saudi Arabia, capped with a few months study at the University of London. Dr. Abulaish decided to specialize in fertility; anticipating the reader's surprise in this, he relates he found that Gaza also had high infertility rates with couples desiring to have children. Whether this is his personal conviction as a Muslim or a desire not to be controversial with his associates he does not give a position on birth control which is pretty close to being haram in Islam. IMV encouragment of family planning and giving women control of their bodies would be an essential step to improving life in the Gaza strip as UN stats show that standards of living and longevity increase as average family size decreases. I have a couple of disagreements here and there. For example, early on he repeats the meme that Gaza has the highest population density on earth - according to the CIA Factbook it's actually 6th, behind Macau, Monaco, Singapore, Hong Kong and Gibraltar and about the same as the Tel-Aviv/Haifa corridor. And when he tries to get back into Israel via Jordan to be with his dying wife his name comes up Overall though this a remarkable story of tragedy and hope, opportunity and loss. At 15 his family lost his home to Israeli bulldozers as part of Ariel Sharon's ill-designed attempt to physically divide Gaza in order to control insurgency, yet using the money he earned at the aforementioned Israeli farm he was able to pay for a new home. He was able to study abroad and send some of his children to a peace camp in the United States where Israeli and Palestinian children could meet and learn about each other. He was able to learn his residency in the Soroka hospital of Be

Published by Thriftbooks.com User , 12 years ago
I finished I Shall not Hate: A Gaza Doctor's Journey by Dr. Izzeldin Abuelaish in one evening. As biography of a person involved in a conflict, it is not heavy on historical details and analysis. But it's moral challenge is in the title. "I shall not hate." Add to that, "I shall be thankful. I shall continue working. I shall hope. I shall treat the survivors. I shall act for justice." Reading the book produced in me shame for my not adopting these attitudes when I have encountered much, much, much smaller challenges. That said, the book is not solely or primarily self-help or motivational. I consider myself a pro-Palestinian actvist, and I have to evaluate this book from that perspective as well. I would certainly think Dr. Izzeldin would consider this book to have political implications. Dr. Izzeldin has a secular view of Palestinian liberation, as reflected by his recollections of material conditions at different points in his life. He was born in Gaza to a refugee family in 1955, and they had no running water. Fifty years later, they had limited, intermittent running water which had risks of contamination. He lists in some detail the material conditions in which Gazans lived in the period between the Israeli "withdrawal" and the Gaza War of 2009. He describes, effectively, in sprit-crushing detail, the process the Israelis forced on Gazans to cross into Israel and return home. For Dr. Izzeldin, liberation entails improvement in these living conditions, and, to the extent that Palestinians can achieve these despite their expulsion from their homes and Israeli occupation, they must strive to do so. In other words, in the words of the Arabic proverb, ãÇ áÇ íÏÑß ßáå áÇ íÊÑß ßáå That which cannot be achieved in its entirety should not be abandoned in its entirety. The secular liberation may not achieve an ideal justice, but it is something positive that we can do now, and all other alternatives are worse. Dr. Izzeldin believes co-existence of Jews and Palesinians is possible. He does not take a particular stand on what the political solution would look like, but he bases this belief on his positive interactions with individual Israeli Jews who have treated him fairly. Now I have all kinds of academic reasons why his belief is erroneous. Terms such as "systemic," "Jim Crow," "apartheid," "colonialism" and "ethnic cleansing" could be spewing from my keyboard now along with links to quotes from Israeli Jews, maps of Israeli colonies in Jerusalem and the West Bank and statistics of incarceration, torture and killing to disprove his belief. But what would my realism/pessimism accomplish? Let's understand one thing. We on the outside, who claim to support the Palestinians, before we support their rights, must support their autonomy, their right to choose their course of action. Finally, in the last decade of my life, I've come to believe more and more in non-violence, for a variety of personal and intellectual and religious reasons. Dr. Izze

Published by Thriftbooks.com User , 12 years ago
I read this book, which I heard about during a recent CBC radio (The Current) interview with the author and two of his daughters, as a person relatively ignorant about the ongoing issues between Palestinians and Israelis. After finishing it, I feel a bit better informed, having learned such things about Gaza as its size, population density, poverty rate, unemployment rate and living conditions of its inhabitants as well as significant historical and political events and agreements affecting the region, though purely from the Palestinian perspective. I'd certainly be interested to know what Israelis think about Dr. Izzeldin Abuelaish, a multi-lingual (Arabic, Hebrew, English) fertility specialist, described by an Israeli colleague as, (p x) "forward-looking and full of hope," and his efforts towards a peaceful solution to the problem. In January of 2009, the recently widowed father of eight lost three daughters and a niece near the end of the several-week-long Gaza War when an Israeli tank shelled his home. An Israeli journalist he'd been updating regularly about the situation on the ground in Gaza took a call from the doctor moments after the attack that was broadcast on live television. The station continued airing the heart-wrenching conversation for several minutes (available for viewing at YouTube under the title, "Gaza Doctor - Israel," along with successive interviews and Israeli finger pointing, shedding further light on the situation), after which information provided by its staff helped rescue workers locate and transport survivors to the hospital. The incident put the doctor smack dab in the middle of the spotlight, and now, just over a year later, he shares his story in print form. This short (under 200 pages) pricey ($35) book is broken up into seven chapters (several quite lengthy) that provide information about Abuelaish's ancestors, upbringing as part of a large family living in primitive conditions in a refuge camp, education and training as a doctor, marriage and family life, and significant events in the region. He repeatedly details the logistics of and difficulties involved in obtaining passage through Israeli checkpoints, a sometimes harrowing, often time-consuming and always frustrating process that he endured daily while working at an Israeli hospital as a fertility specialist and recounts events leading up to his loved ones' deaths. But the story's most amazing aspect is this family's decision to forgo talk that might incite further violence, forgive, and speak overwhelmingly in support of peace, a task made easier, at least for his daughters, by knowledge they gained at Creativity for Peace, a camp in New Mexico whose mission, according to their site, is to "...nurture understanding and leadership in Palestinian and Israeli adolescent girls and women so that they aspire to and take on significant roles in their families, communities, and countries that advance peaceful coexistence," in spite of its suffering. Dr. Abuela
Trustpilot
Copyright © 2022 Thriftbooks.com Terms of Use | Privacy Policy | Do Not Sell My Personal Information | Cookie Preferences | Accessibility Statement
ThriftBooks® and the ThriftBooks® logo are registered trademarks of Thrift Books Global, LLC