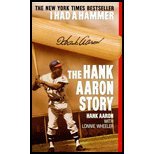 I Had a Hammer: The Hank Aaron Story

Henry "Hammering Hank" Aaron slugged his way from the Indianapolis Clowns of the Negro League to the Atlanta Braves, where, on April 8, 1974, he shattered Babe Ruth's homerun record--a feat recently voted the greatest moment in baseball history. "A hell of a story".--New York Times Book Review. Photographs.

One of the best sports autobiographies ever

Published by Thriftbooks.com User , 17 years ago
In this baseball season where my favorite team is floundering in the cellar, and every good story(compelling divisional races) is counterbalanced by the bad (steroids), I have been trying to maintain interest by re-reading some baseball books that I have read over the years. After re-reading "I Had A Hammer", I remember why it remains one of the best biographies/autobiographies that I have ever read. The sports genre in books is much harder than one would think to keep up interest in. There are very few gems in any sporting subject; mostly it's very mediocre to terribly vapid. Usually a fan becomes disappointed in their sports "heroes" when they read a biography about them, because the writing can be so bad. Fortunately, for a ballplayer as great as Hank Aaron, the work lives up to the character and legend of the man. Mr. Aaron does a splendid job of taking the reader through his life in Alabama, his discovering the game of baseball, and - of course - his remarkable career. His writing style provides enough description to allow the reader to get a true mental "picture" of what his life was like without getting bogged down in minutiae. Throughout the book, I had the feeling like I really was there watching his career unfold. Of course, that brings us to the real core - and most important part - of his life story. That is, what Mr. Aaron experienced as he neared and eclipsed Babe Ruth's home run record. Most celebrities or sports figures would relate this in that sensational, "woe-is-me", tabloid-tell-all sort of way. Not Mr. Aaron. He shares many of the truly hateful and despicable letters he received from people across the nation who saw the idea of an African-American breaking the record of a white man as egregious. Mr. Aaron relates how this inundation of hate mail affected him, but he manages to avoid expressing any hate towards the senders of those letters. One obviously gets the sense that Mr. Aaron steeled himself against those attacks with grace and dignity, allowing himself to still play the game the way it was supposed to be played, and to do it with class and personal enjoyment. It is striking to return to Mr. Aaron's autobiography after the events in baseball over the past decade. We as a fan base in general express outrage over the strike, the steroids (and questions about those players that broke records), outrageous salaries, and the like. It seems to always elicit a response demanding a return to the "innocence" of baseball seasons and players gone by. However, Mr. Aaron's experience demonstrates that there was controversy in almost every era of the game. In his case, it was a despicable form of racial hatred expressed by a very vocal minority in this country. Again, "I Had A Hammer" stands out as one of the great books in the sports genre, and stands out as one of my favorite biographies/autobiographies. I rate it the full five stars, and encourage readers of all interests to give this one their attention

Published by Thriftbooks.com User , 17 years ago
In his autobiography, Henry Aaron takes you back to the beginning of his baseball career and makes you feel that you were right there with him. You felt the hurt, disgust and anger that he did as he confronted racism around every corner and in every ballpark. And he handled it all with such dignity. It follows his career from Milwaukee, a city that loved him and still does, to Atlanta, a city that never fully understood or appreciated him. Whether you are a baseball fan or not, this book looks at social issues and how it related to baseball of that era and transended into today. I strongly recommend this to anyone who just wants to read a terrific life story.

Beyond just another sports biography

Published by Thriftbooks.com User , 20 years ago
This is a terrific autobiography that transcends the classification of sports writing. It is written in a style and format that that is compelling and informative. The typical sports biographies tell a series of funny and dramatic inside stories around memorable moments in sports history that the subject participated in. When well done, the reader gets what he or she is looking for and then some. When poorly done we get some stale jokes, old stories and an inept attempt at describing the true meaning of courage. In "I Had a Hammer" Henry Aaron and Lonnie Wheeler have given us a glimpse at a young black man growing up in the Deep South to become the greatest home run hitter of all time. In the odyssey we see the elements of society alternately denigrate and celebrate this gifted athlete. We are given these insights through the co-writer's preambe to each chapter and the personal recollections of key players in the life and career of Hank Aaron. This array of perspectives is excellently done and gives the book a good flow. What gives it the greatest impact is the candid personal recollections of Mr. Aaron. He is outspoken in his contempt for the elements of racism that followed (or is it lead) him every step of the way to the top. Yet he is forgiving of many who may have slurred his race in the past and then later learned to overcome their biased opinions. Much of that transition came through their experiences with him and other early black major league ball players. This is a book about our nation's racial attitudes as seen through the experiences of the author. Don't be mistaken, this is still an excellent book for the sports fan. The casual fan will come away with a greater sense of sports history. The Braves fan will really enjoy some of the historic events recreated in the middle chapters. The Milwaukee fan need only read the last paragraph of chapter 7 and a tear or two will likely fall. The Atlanta fan will come away with a challenge to accept the validity of Aaron's view of his experiences in that city. Some will and some won't. However, all sports fans will come away with an excellent education on race relations in America from the 1930' to very recent years. They will gain this insight not through a lecture by the authors but by the very human expressions of a man telling his own compelling story.

Published by Thriftbooks.com User , 21 years ago
I started following baseball when we moved to NJ in the late 60's and, serendipitously, the first season that really captured my attention was 1969. We had a color TV (a rarity at that time--it was a big old console job with stereo & turntable built-in. You sometimes had to bang underneath the picture tube with a hammer to fix the vertical hold) and our next door neighbor Joe Koberlein would come over to watch Mets games.) Unquestioningly loyal to our beloved Amazins, my brother and I had little doubt that Tommie Agee and Cleon Jones (both of whom happen to have come from Aaron's hometown of Mobile, AL) were the two best outfielders in baseball, maybe the two best ever. Our Father, who had doggedly remained a Dodger fan despite their move West, would put in a word for Duke Snider. We lived in Yankee country, so Mickey Mantle still had his backers and their were those residual Giants fans who stumped for Willie Mays--who also won allegiance from many black fans on racial solidarity grounds. But I really don't ever remember a Hank Aaron fan. Sure we knew he was good, especially during the NLCS were we reminded of how dangerous he was, but he just wasn't terribly glamorous or personable and he played for a team that noone rooted for, so to our minds he was barely worthy of notice. The, seemingly all of a sudden, we realized the guy was about to catch Babe Ruth. I remember NBC breaking into their regular programming to show his 715th HR live. Then began the arguments over just how good he was; arguments that always seemed to have a whiff of race about them. In the ensuing years this argument has hardly died down and the racial overtones have certainly not faded. In fact, the subtle assertion that the only reason you would deny Aaron primacy is that you are a closet racist has added an additional layer of bitterness to his legacy. All of this combined with Aaron's own demeanor, whether he is aloof or shy or whatever, has always led me to view him somewhat askance. There's that visceral level on which I just can't grant him equality with Ruth, let alone with the more personable Mays. So it came as a great surprise and a pleasure when this book was published, to find in its pages a Hank Aaron who was not only a great baseball player but a compelling hero and human being. Beyond simply providing a complex portrait of a gifted and proud human being, the book serves to provide some context for the pure numbers that Aaron put up in his career and, more importantly, reminds us of the backdrop of persistent racism against which these feats were achieved. We all find things easier to comprehend if they follow an easy narrative form, so when we say that Jackie Robinson broke the color barrier it is easy for us to misperceive this as meaning that racism in baseball ended in the late 40's. And Aaron, because he was so good for so long, seems to us a figure of the 60's, or even the 70's. But the book reminds us that Hank Aaron began in the Neg

Published by Thriftbooks.com User , 22 years ago
If you are a baseball fan, of any age, this is the ultimate book by one of the greatest to play the game. Hank Aaron is a true American hero, and this book gives quite a bit of information on his early days and his struggles both on and off the field. This country needs more heroes like Hank Aaron.
Trustpilot
Copyright © 2022 Thriftbooks.com Terms of Use | Privacy Policy | Do Not Sell or Share My Personal Information | Accessibility Statement
ThriftBooks® and the ThriftBooks® logo are registered trademarks of Thrift Books Global, LLC