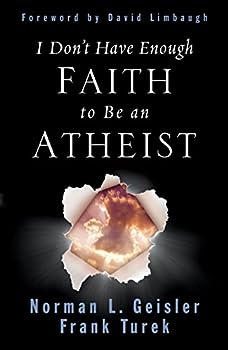 I Don't Have Enough Faith to Be an Atheist

This description may be from another edition of this product. Norman Geisler and Frank Turek argue that Christianity requires the least faith of all worldviews because it is the most reasonable. A valuable aid to those interested in examining the reasonableness...

I don't have enough faith to be an atheist is an incredible book.

Published by John V. , 1 year ago
The facts presented cut through the lies that are taught by atheists. There are some points that are quite humorous on how they counter opposing views of intelligent design.

Published by DF , 1 year ago
Very convincing. The authors systematic approach shows how: -Truth is knowable. -It is true that a theistic God exists. -Miracles are possible and were used by the apostles to confirm the message of God. -The New Testimate is historically reliable and it says that Jesus both explicitly and implicitly claimed to be God. -Jesus backed up is claims with miracles, therefore, Jesus is God. -Jesus taught that the Bible (OT) is the Word of God (and apostles confimed the NT), therefore, what the Bible says is true. A must have.

Published by Edwin McCora , 2 years ago
Most information in one place!

Published by Thriftbooks.com User , 15 years ago
I'm a recent Bible College grad, and a preacher whose main interest is in apologetics. I have been concerned in recent years however, with the amount of "apologetic" books that assume a christian worldview is held by the reader. Books that just jump right into topics regarding sin and salvation without first laying a ground work. I find it especially annoying when a praticular volume uses scripture to confront it's reader, when the book is intended to be read by those who do not believe in God, much less the authority of the Bible. This book is VERY different. Dr. Geisler has been a prolific writer for decades and he does not dissapoint. With the added wit and humorous sarcasm of Frank Turek this book builds a step by step, block by block, foundation for a christian worldview. It causes the reader to evaluate every element of a godless worldview. It DOES not beat one over the head with scripture. IT slowly and systematically builds a case for a theistic worldview, then a christian worldview. Landing finally at the issue that has captivated the known world for the past 2,000 years. Was JEsus who He said HE was....and did He really rise from the dead.. I HIGHLY reccommend this book to the skeptic and believer alike. It will enlighten the skeptic as to why people hold so tightly to a seemingly foolish worldview. For the believer it equps one to logically discuss the issues that divide us with skeptics. We owe it to those who differ in worldview to be able to soundly, logically discuss our reasons for belief!! BUY THIS!!

Excellent Summary of the Evidence for Christianity

Published by Thriftbooks.com User , 17 years ago
Norman Geisler and Frank Turek have managed to pack an incredible amount of evidence for the Christian faith into this highly accessible 448-page book. They have succeeded in crafting a persuasive and powerful case, first, for the existence of God, and, second, for the deity of Jesus Christ. Along the way, they deal with truth, logic, miracles, morality, Intelligent Design, biblical interpretation, and even the age-old question, "If God, why evil?"As I said in my endorsement of the book, this is a clear, complete, and compelling resource that I wish had been available when I was an atheist. It sure would have made my spiritual investigation a lot easier!If you're looking for razor-sharp thinking and a one-stop overview of the historical and scientific data that undergird Christianity, then you'll find this book to be an invaluable investment. -- Lee Strobel

The Truth Is Marching On!

Published by Thriftbooks.com User , 17 years ago
"I Don't Have Enough Faith to Be an Atheist" convincingly shows why atheism and other non-Christian views require a lot more faith than Christianity. Geisler and Turek build their case from the question of truth all the way to truth of the Bible. Along the way, in a readable and often entertaining way, they debunk relativism, agnosticism, atheism, Darwinism and New Testament liberalism. Their explanations of how the big bang, the design found in both the Universe and living organisms (like humans!), and morality point to God are worth the price of the book. I especially like the clarity they bring to the creation-evolution debate. Their point about how science is built on philosophy helps clear away much of the dust kicked into that often raucous debate. "It's not about the Bible vs. science or religion vs. science" they write, "but about good science vs. bad science." Geisler and Turek show that it's actually the Darwinists who are practicing the bad science. Darwinists rule out intelligent causes before they even look at the evidence. In doing so, they ignore observation-- the very foundation of science-- much as the opponents of Galileo once did. That's bad science built on bad philosophy. I Don't Have Enough Faith to Be an Atheist has four great chapters that systematically show why the New Testament documents are telling the truth. The authors show why we can be assured that the documents were written within a few decades of the evens which they report and contain historically-confirmed eyewitness details. They also cite non-Christian writers, archaeology, and list over 30 characters found in the New Testament that have been confirmed by secular sources. But they are at their best when they point out how the New Testament story is an unlikely invention. After listing a series of embarrassing gaffes of the apostles, Geisler and Turek ask the reader, "If you were a New Testament writer, would you include these embarrassing details if you were making up a story? Would you write that one of your primary leaders was called 'Satan' by Jesus, denied the Lord three times, hid during the crucifixion, and was later corrected on a theological issue? Would you depict yourselves as uncaring, bumbling cowards, and the women-whose testimony was not even admissible in court-as the brave ones who stood by Jesus and later discovered the empty tomb? Would you admit that some of you (the eleven remaining disciples) doubted the very Son of God after he had proven himself raised to all of you?" Geisler and Turek don't have enough faith to believe it's a made-up story. Neither do I. This is an engaging and affirming book with a vast scope. I highly recommend it!

Atheist almost swayed by this book

Published by Thriftbooks.com User , 17 years ago
Having read quite a few Christian apologetics books, I feel I can say that this one is by far the best in scope, logic, and wit. The authors convincingly build up their case in layers, starting with well-reasoned arguments why God exists, and building in stages as to why Jesus is the way to go, once everything else is accepted. The authors include run-ins they've had with professors and debate opponents, making for an interesting read. The appendixes, which feature a mock dialogue between a Christian and an atheist, are entertaining. The book covers all the important issues that this topic entails, from cosmology, life origins, evolution, morality, and a defense of the Bible. No honest atheist can read this book without being impressed by the quality of the theistic arguments as presented by the authors. The objections of skeptics are confronted with confidence. Did it change my mind? It may have planted a seed. I highly recommend this book to both atheists and Christians, and to anyone else interested in this topic. It is VERY convincing. These guys know their stuff.
Copyright © 2020 Thriftbooks.com Terms of Use | Privacy Policy | Do Not Sell My Personal Information | Accessibility Statement
ThriftBooks® and the ThriftBooks® logo are registered trademarks of Thrift Books Global, LLC