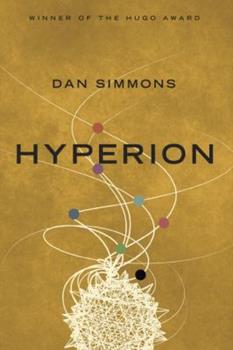 (Book #1 in the Hyperion Cantos Series)

A stunning tour de force filled with transcendent awe and wonder, Hyperion is a masterwork of science fiction that resonates with excitement and invention, the first volume in a remarkable epic by the multiple-award-winning author of The Hollow Man . On the world called Hyperion, beyond the reach of galactic law, waits a creature called the Shrike. There are those who worship it. There are those who fear it. And there are those who have vowed to destroy...

Published by Doreet , 1 year ago
I guess that you have to like a certain type of future of man, or of the universe to like Hyperion. I did not care that much for the original story of the traveling 7 who are on a pilgrimage the Canterbury Tales. What I guess I like a lot more is smart-aleck interesting main characters who go into satire of basic big important parts of human life. For example the movie "Fight Club" is one of my favorite movies of all time. --I am not so interested in huge philosophical theories of God, quite frankly, because I have myself personally done that already and found it "ok it's fine,". If you really are interested in huge theories of God, I suggest you go to the Lubavitcher Chasidic website which is a cult like Jewish group and their versions of "God "are very interesting ..They are very PRACTICAL RELIGIOUS people. Basically they believe in religion and science together. So although this story is interesting it's not as fantastic as REAL RELIGOUS CULTS.. Also I need a sense of humor and irony in my plots. I am the one who loves the story "The Portrait of Dorian Gray" and I really appreciate that writer. Yes Hyperion is very grand and and interesting story, it's just not my cup of tea. I found the stories of the pilgrims' pain. loss and horror very hard to take as "necessary ." --the recreation of the writer who dies from TB was horrific. THAT WAS HORROR. I suggest that this book be labeled as "sci fi and horror". Because the horror part is VERY Horrific.

Possibly my favourite sci-fi ever

Published by Thriftbooks.com User , 21 years ago
Hyperion is truly incredible. As well as being a science fiction version of the Canterbury Tales, it also sets out a breathtaking and at the same time chilling vision of what humanity's future might be like. It creates a spectacular and wonderfully detailed world where citizens step through farcaster portals to have lunch on another planet, mysterious artificial intelligences scheme and plot, so-called 'barbarian' Ousters migrate between the stars, and a terrifying demon-machine called the Shrike stalks the area around a set of mysterious artifacts which appear to be travelling back in time. This world is populated with all sorts of fascinating characters and cultures, such as an artificial recreation of the poet Keats, a girl doomed to age backwards and a planet of peaceful environmentalists crushed for daring to resist modernisation.This first book of four, consisting almost exclusively of the stories told by seven pilgrims (a priest, a soldier, a poet, a scholar, a detective, a starship captain and a diplomat) as they travel across the planet Hyperion to meet the Shrike, is essentially a gigantic prologue which sets the scene for the tumultuous events of The Fall of Hyperion. It builds up a picture of the Hegemony (the 'established' human grouping) as what I take as being the author's idea of the inevitable product of today's Western civilisation, and establishes the background to the crisis that has brought the seven pilgrims together, which appears at first to be a simple war of aggression by the Ousters but turns out to have much deeper ramifications involving the AI TechnoCore, the Shrike and the future of humanity. The stories they tell also leave many unanswered questions and mysteries that will hopefully leave the reader running to find the second book. Each one is distinct - some horrific, some merely moving, all intriguing. I have to say that the Priest's Tale, the first to be told, will always be special because it left me thinking: 'Wow! Could this get any better?!' And best of all, because this is the first book, you don't have to grimace too much at the annoying continuity errors that increasingly crop up as the series progresses.As I said, the book leaves many questions to be answered in the next one. However, the greatest mystery of Hyperion is not the unknown purpose of the Shrike or the sinister plans of the Core. No, the greatest mystery of Hyperion is: WHY DOESN'T THE CONSUL HAVE A NAME?! ;-)

Space opera at it's best! The best series ever!

Published by Thriftbooks.com User , 22 years ago
Hyperion and the rest of the series is the best science fiction series yet written. I do not make this claim lightly. I have read alot of science fiction and the only books that I would say that come close are The Sparrow by Maria Doria Russell and Ender's Game by Orson Scott Card. Although Across the Sea of Suns and the rest of the Galactic Center series by Gregory Benford was another favorite. Hyperion is one planet in a large federation of planets which are at their political peak. This book is the story of 7 people picked to go on a pilgramage to the time tombs on Hyperion to see if they can figure out what is happening. The time tombs are guarded by a creature called the Shrike. The Srike can move forward and backward through time at will and seems to be invulnerable to any type of weapon. The 7 people are strangers to each other, but they have on common link, they have all encountered the Shrike before and been allowed to live. There is a legend and even a cult religion that has grown up around the Shrike for hundreds of years. It is said that the Shrike can grant any wish. Pilgrims that go searching for the Shrike must travel in groups of prime numbers or everyone will die. They must approach the time tombs on foot or everyone will die. According to legend, the Shrike somehow interviews everyone in the party if they have followed these rules and one person will have their wish granted and all the other party members will be killed. Also, the time tombs are moving backwards in time, and the fear is that once the time tombs stop that a whole army of tens of thousands of Shrikes will be unleashed. But this is just one thread in the vast tapestry of the story which grows in complexity with each book. What is happening on Hyperion is at the center of the collapse of this federation of thousands of planets that is on the brink of collapse. It is a facinating tale. Enjoy.
Trustpilot
Copyright © 2022 Thriftbooks.com Terms of Use | Privacy Policy | Do Not Sell or Share My Personal Information | Accessibility Statement
ThriftBooks® and the ThriftBooks® logo are registered trademarks of Thrift Books Global, LLC