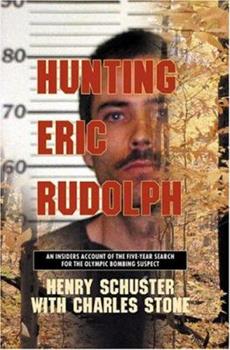 Accused of detonating bombs at the 1996 Atlanta Olympics, two abortion clinics, and a gay nightclub, Eric Rudolph went on the run. He shot bears and ate salamanders for more than five years, but finally was captured in June 2003 and now sits in a Birmingham jail. Hunting Eric Rudolphcovers the problems that hampered the investigation into the Centennial Park bombing, including a wrongful accusation, and discusses where and how Eric Rudolph obtained...

Published by Thriftbooks.com User , 17 years ago
This is a gripping story, very well-told. From that bomb explosion at the Atlanta Olympics, through the Richard Jewell madness, and then subsequent attacks on abortion clinics, this tale is told with the detailed knowledge of a true insider -- an agent on the case -- with a skilled journalist's perspective and context. The psychological profile of Rudolph, the criminal mastermind,gives it special depth. Schuster and Stone really deliver. I enjoyed it immensely.

Published by Thriftbooks.com User , 17 years ago
This is one of the best true crime books I've read in a long time. Really well done. Highly recommended!

Published by Thriftbooks.com User , 17 years ago
Hunting Eric Rudolph is an awesome read. The authors deliver the story of Rudolph's entire life, often with an insightful and somtimes humorous backdrop. It goes in depth to explain the reasons for Rudolph's perplexing psyche and the culture in which it was cultivated. The real value of the book however is the context in which it is delivered. Schuster explains why this story was not only significant in our past, but what we can extract from it to prevent similar types of domestic terrorism in our future. Thoroughly researched and masterfully presented, this was definitely a book that I could not put down.

Published by Thriftbooks.com User , 17 years ago
A great read about Eric Rudolph, serial bomber and fugitive. The authors use an energetic narrative style and an acute sense of the absurd as they recount the circumstances of the bombings, delve into the bizarre background of Rudolph, and expose the monumental fumbling of the case by the feds. Touching portrayals of the victims of the bombings remind us that years after the events, those involved still suffer.

Published by Thriftbooks.com User , 17 years ago
With Hunting Eric Rudolph, Henry Schuster- one of the country's foremost news producers and experts on terrorism- uses his cinematic eye and newsman's nose for detail to bring to life the series of crimes that set the tone for our fearful twenty-first century. Gracefully written, with economy and personality, a storytellers flair: think In Cold Blood with exhaustive footnotes. Mike Sager Writer-at-Large Esquire
Trustpilot
Copyright © 2022 Thriftbooks.com Terms of Use | Privacy Policy | Do Not Sell or Share My Personal Information | Accessibility Statement
ThriftBooks® and the ThriftBooks® logo are registered trademarks of Thrift Books Global, LLC