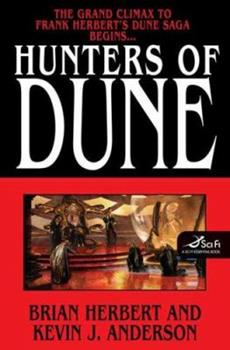 Hunters of Dune and the concluding volume, Sandworms of Dune, bring together the great story lines and beloved characters in Frank Herbert's classic Dune universe, ranging from the time of the Butlerian Jihad to the original Dune series and beyond.

Published by Thriftbooks.com User , 13 years ago
It was really excellent to see Miles Teg again, and all my favorite characters stranded on a no-ship off in parts unknown with a cargo hold full of sandworms. Readers get to most all of the familiar faces from the other Dune books. I was especially touched by how Brian and Kevin handled Dr. Yueh trying to cope with his guilt and the ghola memory of what he had done. The Honored Matres are as vicious as ever and readers at last learn the identity of the mysterious Outside Enemy that's been hinted at for many books. (Plenty of people guessed it ahead of time -- I did.)

Published by Thriftbooks.com User , 13 years ago
I wondered how these authors were going to pull it off. The original Herbert left so many questions unanswered, so many alliances, so many storylines (and some of them were confusing on the first reading). Brian Herbert and Kevin Anderson introduced dozens more questions in their own books. But hUNTERS picks up the story very nicely. Even if you don't exactly remember everything that happened in the previous book, or if it's been a long time (or if you're one of those who didn't even read it), the authors give you enough details to get you up to speed, but they don't go overboard. The story begins in an interesting fashion by introducing the different characters and plots, each one in the middle of a crisis. Each one gets more and more complicated, picking up on hints that readers spotted in the Herbert originals. Gholas being grown of special cells from all the main characters in previous books. It makes for a very interesting mix. Just to see Jessica, Paul, the Baron, and Thufir Hawat all being the same age -- cool! HUNTERS isn't a good place to start if you haven't read a Dune book before, but it's certainly a great addition for the rest of us real Dune fans.

Published by Thriftbooks.com User , 14 years ago
another great story in the epic dune series! i must for any dune fan!

Published by Thriftbooks.com User , 15 years ago
It has been over a year since I finished Chapterhouse: Dune. In the meantime, I tried to read the other Dune novels that Brian Herbert and Kevin Anderson wrote, but they did not captivate me like the original works by Frank Herbert. Then, this book came along. From the moment of reading the first chapter to the end of the short story at the back of the book, I was hooked. I finally realized why Brian and Kevin had written the other books. All the pieces fell into place. This was a wonderful book, and I highly recommend it.

Published by Thriftbooks.com User , 16 years ago
First, there won't be any spoilers in this review. I was early in high school when my Dad bought me the new hardcover Chapterhouse: Dune. I admit it, the book was over my head, and I struggled. The years went by, though, and I found myself returning often to Chapterhouse and Heretics, and these may now be my favorite books in all literature: extended critiques of religion, government, ecological key logs, and the desperate need for "wild" creativity and love which can upset all these things and create anew. The final 3 pages of Chapterhouse are wonderful - were these the mysterious enemy? How could someone horrify the Honored Matres? Hunters gives the answers and maintains the spirit of Frank's writings. I've enjoyed the Prequels by Brian and Kevin, and now they've outdone themselves. Hunters is heavily layered (wheels within wheels within...) and extremely satisfying. After imagining so often what happened to them, it's such a kick to see Duncan back, and the great Miles Teg, and Sheeana with her worm pals. So much happens at once in Hunters: at times I miss Frank's rather "involved" style of writing, but at others I thoroughly enjoy how Brian + Kevin depict action scenes and motivations much more clearly. For instance, at the end of Heretics the ferocious attack where Teg steals the no-ship - this action is glossed over in the writing. But with Hunters, you get it all - the violence, the strategy, and the results. I love Frank's writing, but after waiting 20 years I'm very glad to start seeing clear resolutions! :-) One of the best things is how Hunters handles all the preparatory work wonderfully - re-introducing the original characters, the universe, and then pushes the plot at a hard pace. Many things I wondered about are revealed, and then more questions are raised - you aren't just strung along to the end and have to wait for Sandworms to know what's really going on. And now that the preliminary work is done, it looks like that finale, Sandworms, is going to be all action and consequence (as Darwi Odrade might say). Glad to see you back for another life, Duncan - I'm a bit like the poor Tyrant in that way.
Trustpilot
Copyright © 2022 Thriftbooks.com Terms of Use | Privacy Policy | Do Not Sell or Share My Personal Information | Accessibility Statement
ThriftBooks® and the ThriftBooks® logo are registered trademarks of Thrift Books Global, LLC