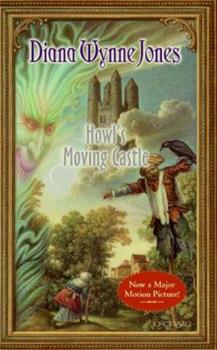 This entrancing classic fantasy novel is filled with surprises at every turn. An international bestseller, this much-loved book is the source for the Academy Award nominee for Best Animated Feature.Sophie has the great misfortune of being the eldest of three daughters, destined to fail miserably should she ever leave home to seek her fate. But when she unwittingly attracts the ire of the Witch of the Waste, Sophie finds herself under a horrid spell...

Published by Fiona , 3 months ago
Now I understand why everyone loves this book so much! It did not disappoint. One of my new favorite middle grade books!

Published by Sunsess , 4 months ago
I am so bitter. If I didn't think the rest of the book was an ABSOLUTE MASTERPIECE this would be sitting with Splintered Light at a spiteful 1 cow, but you know I love fairytales. And goofy, nonsencial things. Fire demons that are just little grumblies and love shooting every which way but right. There's a REASON I stayed up to read this. The dynamic between the characters was simply incredible. It had charm. It had heart. BUT IT DID NOT HAVE A DEATHLY DRAMATIC LOVE CONFESSION SCENE. *Throws book at wall* Honestly the whole relationship was botched. The one relationship that was soooooooo easy to get right, that was built up from page one. I knew it was going to happen, I was dyingggggg for it to happen, and then it DID happen and... It's like when you go to a five star restuarant, order a dish, only to find out it was cooked in the microwave. There's nothing wrong with microwaved food, but you teaseddddddd me with gourmet delicacies and then didn't deliver! So bitter. I'm watching the movie. Surely it's more satisfying there. Right? Right??? Oh, my heart. I feel like old Sophie. And to think, I'm actually relying on a MOVIE is better than the BOOK scenario to save me... I think I'm in trouble. Four cows. I can not drag you down into rating oblivion, but I can at least take away a cow. I think that much is fair. So BITTERRRRRRRRR </3

Published by Alison , 1 year ago
Diana Wynne Jones could write a page tuner about carpet weaves, and Howl's Moving Castle stands out out even among her other novels. This will almost certainly become one of your go-to comfort books: it's whimsical and light without being saccharine.

GREAT BOOK plus a little extra

Published by Ella , 2 years ago
Someone left five photos of an older woman in my copy of the book-- I choose to believe it is Sophie. 11/10 would recommend this book and the random lady's pictures.

Published by Emily , 2 years ago
I was a big fan of the movie, so I thought I needed to read the book to prove myself an even bigger fan. I’m so glad a did because of how completely DIFFERENT it is from the film. If you want a totally new story with characters you love, this is for you.

Published by Techmad01 , 3 years ago
This is a fantasy book that reminded me of Harry Potter, a little. This was a book with twists and turns that you did not see coming! Howl's Moving Castle was a welcome relief to read about and also laugh at times. This was a book that was a page turner and I could never wait to get back to read what was happening next. It does not deal with murders, or many social issues that children are going through today. It is a good book to forget what is going on and just jump into the fantasy of the book! I enjoyed reading this book a lot.

Published by Jasmine , 3 years ago
If anyone has seen the studio ghibli adaptation of this novel, you'll fall right in love. It's quite different but amazing and much better. Funny, quirky characters and hilarious conversations. A must read.

Published by Nate S. , 3 years ago
Though a children's book, Jones has still succeeded in establishing an original and imaginative world, in which anything can happen (and often does). It was a great pleasure to flex my own imagination by working through the story. I am not always a huge fan of fantasy as I find it tends to fall back into familiar tropes, but Jones takes the classic characters of Witches and Wizards and creates a story that is new, refreshing, and unique. A rich story, complex characters, and a satisfying ending in which everything is tied together. The young Sophie is feeling unhappy running her family hat shop after her beautiful sisters leave home and become successful. However, falling into bad favor with the wicked Witch of the Waste, Sophie is cursed to become a 90 year old woman. She runs away, and stumbles upon the mobile castle of the Wizard Howl, who has his own bone to pick with the Witch of the Waste.

In which a story becomes a legend...

Published by Thriftbooks.com User , 16 years ago
In the land of Ingary, in a small town called Market Chipping, lives a 17 year old young woman named Sophie. Sophie's family owns a hat shop, and between her stepmother Fanny and her Father Sophie has been named the heir apparent. While Sophie learns the business of making and selling hats Sophie's younger sister Lettie (16) and half sister Martha (14 or 15?) go off to apprentice at Cesari's bakery and a watchmaker's named Mrs. Fairfax respectively. Soon all the businesses are booming, what with Sophie's ingenuity and Lettie's good looks the custom just explodes. One day in Market Square Sophie meets an elegant young man with blond hair who compliments her as she runs off to see Lettie. When she meets with Lettie she is surprised to discover that Lettie is not really Lettie, but in fact she is Martha under an enchantment to look like Lettie. Evidently the girls did not enjoy their assigned positions and switched with each other after administering a magical glamour that altered their appearances. It is Lettie who tells Sophie she must stand up to Fanny by demanding a wage for her efforts at the hat shop, that she is worth more. With these thoughts in her mind Sophie heads off to the hat shop where she encounters a woman who changes her life, the Witch of the Waste, a powerful enchantress whose reputation is legendary. At first the Witch arrives on the pretense that she is hat shopping with her assistant, Gaston, but it quickly becomes obvious that Sophie is going to be compromised for her indifferent attitude towards the Witch. The witch casts a spell on her that makes her age drastically from a girl of seventeen to a woman in her later years. When Sophie realizes just how extreme the change is she decides to leave Market Chipping. She journeys for a time, encountering first a scarecrow that is no longer standing up. Once she rectifies this she encounters a magnificent sight, a floating castle. Now, the reputation of this castle precedes itself, it belongs to a wizard called Howl, whose dastardly deeds of consuming young women's hearts is legendary. Sophie enters the castle and discovers that it is inhabited by three persons, a young man named Michael (15) who is an apprentice to Howl, a fire demon named Calcifer who is confined to the hearth by curse and an agreement with Howl, and Howl (Howell Jenkins) himself, who turns out to be the very elegant young man whom Sophie encountered in the market. Sophie decides to stay on the pretense that she is the new cleaning lady, but in reality she is staying long enough to break Calcifer's contract with Howl so that he might break the enchantment on her once she does. While Sophie is there she learns all sorts of information about her hosts. Michael is a stalwart scholar determined to be a good wizard even when he falls in love with one of Sophie's sisters... Calcifer is stubborn but genuine, and Howl... at first Howl seems to be nothing more than an arrogant playboy. Why, he barely ever attends to

Published by Thriftbooks.com User , 17 years ago
Before the movie came out on DVD I wanted to read the novel. I know what the movie is about and I heard it was "loosely based" on the novel. Little did I know that the novel was so delightful! As much as I love Miyazaki films, I don't think he could have wrapped up all the delightful parts for his readers in 2 hours or so. For those who have not seen the movie, I think the two can remain separate (meaning you can partake in one and not the other and be equally satisfied) because from what I read of Miyazaki's interviews, the movie goes along very different focuses and themes. What I found the most enchanting about the book were the rich characters. I don't think any movie could ever do it justice, Miyazaki or not. Howl seems to be the absolute opposite of what a hero should be, but he does grow on the reader and he's really not quite as clueless and self-absorbed as he leads others to believe. And Sophie is the spunky heroine that I thought she would be, although flawed and imperfect, she is very human and this makes her admirable. It's an easy 300 some pages to read and I finished it in a day (laughter occupied some time, and I reread the ending 2x). It brings back familiar themes of fairytales from childhood and evokes some nostalgia on the reader's part. There's an evil witch, a hero and heroine, rich people and poor people, the working middle class and royalty. But the author is a riot in the way she says things so simplisticly, matter-of-factly and sarcastically. She's very witty throughout, which makes it such an entertaining read! In this book there are surprises around the bend, and nothing is as it appears. All in all I think people of all ages can and should read this book, though notably it is in the young reader/independent reader/teen section. My only complaint is that it wasn't long enough to satiate my interest, and the denoument cuts off rather abrutly. But you can be the judge of how much romance you need in your life to be satisfied.

The Best Book I've Ever Read!

Published by Thriftbooks.com User , 22 years ago
This is, quite simply, the best book I have ever read. I read it first when I was about 12 and have loved it ever since. It is the story of Sophie, the eldest of three sisters who believes that she will never do anything with her life. Through a case of mistaken identity she is transformed into an elderly woman and is forced to leave her old life to seek her fortune in the world. She bullies her way into a magical castle owned by the wizard Howl. Sophie makes friends with Howl's assistant Michael and his Fire Demon Calcifer and together they help Howl to beat the wicked Witch of the Waste. The best thing about this book is the writing, which brings it all to life, particularly when Howl takes Sophie and Michael to visit his sister in Wales. The whole book is fantastic and I have now read it so many times I think I will have to buy a new copy as the old one is looking decidedly the worse for wear. I would recommend this book for anyone who has read other stories by the same author or anyone who just wants to read something exciting and entertaining.
Trustpilot
Copyright © 2022 Thriftbooks.com Terms of Use | Privacy Policy | Do Not Sell or Share My Personal Information | Accessibility Statement
ThriftBooks® and the ThriftBooks® logo are registered trademarks of Thrift Books Global, LLC