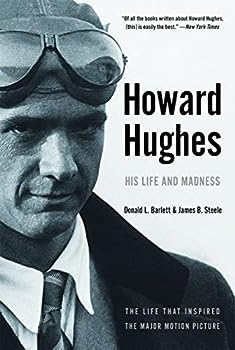 Howard Hughes: His Life and Madness

Howard Hughes has always fascinated the public with his mixture of secrecy, dashing lifestyle, and reclusiveness. This is the book that breaks through the image to get at the man. Originally published... This description may be from another edition of this product.

Very thorough book! Enjoyed every minute of it.

Published by Thriftbooks.com User , 14 years ago
After watching the movie AVIATOR about Howard Hughes' life, I had to know more. This book is extremely detailed as it goes through his many business deals in his life to his ultimate tragic end. I am fascinated by Hughes and this book gave me more than I could have expected. I wanted to know more about his personal life than his business dealings and his financial status and so I bought another one. He certainly was a poor soul who was tortured by his mental illness and having so much money it allowed him to create his own mental hopsital where he could go deeper into maddness and this book shows you exactly how that happened.

Published by Thriftbooks.com User , 17 years ago
Howard Hughes is hot right now. Just like John Nash of "A Beautiful Mind"-fame was a few years ago. The movie "The Aviator" has been nominated for more Oscars than any other. And, after seeing the movie everyone wants to know more about Howard Hughes and attempt to crack the mystery that was his life. There is no question Hughes' character was mythical. He was part Chuck Yeager, Donald Trump, Hugh Heffner, Steven Spielberg, and a genuine madman all combined in a strikingly handsome 6 foot 4 inches body frame. After reading this book, however, you may find that Hughes was ultimately more successful at creating a myth than anything else. Looking at his private life and business ventures, you will conclude that he was a tragic failure. This book has to be the most detailed biography on Hughes. The authors conducted a Herculean research effort that entailed the examination of a quarter million pages of records and documents, and reproducing over 50,000 pages of them. They traveled to numerous cities in the U.S. and Japan to conduct this research. As a result of this unparalleled research, the authors wrote a tightly written 600 page book in extremely small font. Thus, it is not a quick read. But, it is incredibly informative and fascinating. The scope and the details on Howard Hughes business and legal dealings is extremely thorough. And, you get a real sense of who he was, the way he thought, the way he mismanaged every business enterprises he engaged in. Hughes was obsessive about so many things. In business, he developed a weird set of obsessions that included not paying any taxes, becoming a major airline owner at all costs, becoming an aircraft manufacturer and also a defense contractor at all costs. For him, manufacturing an aircraft for the Department of Defense became a lifelong obsession. Contrary to what the outside World may believe, Hughes was not a brilliant businessman. Much to the contrary, he was really a madman. For every dollar he did not pay or save in taxes, he actually lost a dollar fifty or so. Thus, his various tax schemes were disasters from an after tax return standpoint. He also did not have the organizational, and managerial talent to pull off any of his grandiose obsessions to economic fruition. Hughes would certainly have become much richer being just a regular Trust baby supported by the extraordinary capital generated by the company created by his father, the Hughes Tool Company. The latter made a fortune by developing the most advanced oil drilling head. It became so successful as to become nearly a monopoly throughout the entire worldwide oil industry. This invention created the fortune that financed all of Howard Hughes business fantasies and fiascos. However, if he had done so [just become a Trust baby] he would not have become Howard Hughes and offer us the spectacle of one of the most grandiose, grotesque, and tragic life of modern times. The authors also covers in detail Hug

Published by Thriftbooks.com User , 17 years ago
Great book, with many great details. This book will tell you all you really need to know about this great man. The latest movie about Howard Hughes is nothing compared to this book. What was Hollywood thinking when they decided to make this movie? It did not say anything about his Vegas ventures, which was a crucial time in his life. If one knew about his time in the Flamingo hotel, it would have been easy to relate to his crazyness, mentality and thinking. Nothing also was mentioned in the movie about his voyages around the world, which started it all, and his life after his aviation follies. I know the movie was called "The Aviator", but if you did not know anything about Howard before you saw the movie, then all you would think was that he was some crazy aviator who wasted his time building a giant aircraft that was never used for military or commercial purposes, dated a movie star and was always concerned that the US government was out to distroy him. (Well, the government tried really hard!!) Who knows, maybe Airbus engineers had Howard Hughes in mind when they build their latest aircraft, the giant A380. Mr. Hughes will be forever the pioneer who started it all. In this book though,his life and his legacy are well preserved. It is very well written, it tells use about his dramatic life, his eratic lifestyle and behavior, his connections to everything that was going on in the US at the time, and his constant drive for perfection. Hero or not, he was sometimes crazy but also brilliant. If one really wants to know who Howard Hughes really was, all questions will be answered here. This book will tell you everything. Very long but really good read.

Published by Thriftbooks.com User , 17 years ago
By far the best biography I have ever read. Barlett does a brilliant job stringing together the disparate decades of the enigmatic billionaire's life. The books is a quick, captivating - albeit, depressing - read.

The Demise of an Empire

Published by Thriftbooks.com User , 19 years ago
Donald Bartlett and James Steel's book, "Empire: The Life, Legend, and Madness of Howard Hughes" is an excellent example of journalistic reporting converted into book form; the book is simply fascinating to read. The authors accomplish the gargantuan task of separating fact from fiction in the very complex life of Howard Hughes. "Empire" is impeccably researched and documented; It is a bona fide biography that reads more like fiction than real life-such was the world of Howard Hughes. "Empire" traces the rise and tragic fall of Howard Hughes; a man who wore many hats, he was an aviator, Hollywood movie producer, Las Vegas hotel/casino owner ... and a recluse. For one brief shining moment, Hughes was considered one of America's premier aviators, breaking flying records, but then falling out of grace with government and the aviation industry for breaking contract deadlines. In the long run, Howard Hughes would become a grand failure in the world of big business. Bartlett and Steel show the reader a man who had everything to live for, good looks, fame, fortune, power and prestige, but he was unable to triumph over his social and physical phobias that led to psychological, emotional, and physical illnesses and to his final descent into the dwellings of the insane. Hughes' deep mistrust of all people-even family, worked against him and led to his demise and the lose of his billion dollar empire by the very people whose job it was to safeguard him and his empire. By the time I finished reading "Empire: The Life, Legend, and Madness of Howard Hughes, I was much more accepting of my status as a non wealthy individual. Although Howard Hughes had everything a man could possibly wish for, he was underprivileged in peace of mind.... The authors do a superb job in separating fact from myth in the life of Howard Hughes. The book is worth reading.
Trustpilot
Copyright © 2022 Thriftbooks.com Terms of Use | Privacy Policy | Do Not Sell or Share My Personal Information | Accessibility Statement
ThriftBooks® and the ThriftBooks® logo are registered trademarks of Thrift Books Global, LLC