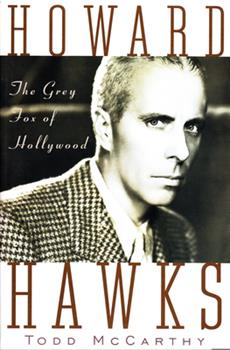 Howard Hawks is the first major biography of one of Hollywood's greatest directors, a filmmaker of incomparable versatility whose body of work includes the landmark gangster film Scarface, screwball comedies like Bringing Up Baby and His Girl Friday, the Bogart-Bacall classics To Have and Have Not and The Big Sleep, the musical Gentlemen Prefer Blondes, and aviation classics and Westerns like The Dawn Patrol and Rio Bravo. Sometime partner of the...

About as thorough as we're likely to get.

Published by Thriftbooks.com User , 12 years ago
Todd McCarthy has just about closed the book on Howard Hawks. It isn't that there is no more to be told about Hawks, particularly about his private life, it's that for one reason or another -- death or discretion -- no one is going to tell it. "Howard Hawks: The Grey Fox of Hollywood" gives us everything we wanted to know about Hawks' professional life, his deals with the studios, his treatment of his performers and crew, and then it gives us more than we needed to know. I frankly got bogged down in his cross-chases with moguls like Darryl F. Zanuck and idiosyncratic millionaire nuts like Howard Hughes. But it has to be admitted that McCarthy did his homework. My God, what a heap of information on display, and what a Mount Everest of papers and documents and letters and memoranda he must have dug through in order to unearth this stuff, going back all the way to the businesses run by Hawks' grandparents. (Was the business a success? No power on earth could drag the answer from me.) We also get a reasonably objective picture of Hawks' character. McCarthy is no fawning fan. When Hawks makes a stinker, McCarthy admits it and tries to figure out why. And we get Hawks as a person too. He was, in a word, dull. Dullness, it could be argued, was his most interesting trait. He was dull as the child of a wealthy Midwestern family and he didn't evolve over the trajectory of his life. He didn't even visit Europe until his professional responsibilities required it. Neither did President George W. Bush or Elvis Presley. This lack of curiosity could be called insular American. When you already are certain about things, why challenge yourself? This complacency is reflected in his plots (which he rewrote extensively during shoots) and even his technique. His directorial style is straightforward and scenes are shot from eye level. No razzle dazzle, no furbelows. And he stole from his earlier work shamelessly. He seemed to have two chief motives for making movies. (1) It was "fun", and (2) it made you a lot of money. Slow in every dimension, he rarely showed anger or any enthusiasm or amusement that required more than a smile for its expression. He gave his old friends and relatives occasional jobs but showed them little affection. If he hired some people repeatedly it was largely because he knew he could rely on them, not because he especially enjoyed their presence. He died in December, 1977. John Wayne spoke (briefly) at Hawks' funeral but hardly anyone else of note showed up. He had always been distant and reserved. Well -- except in a few regards. As a younger man he enjoyed gambling on horses, which sometimes landed him in considerable debt. He could be relied on to lie in ways that boosted his image. And he did have a few co-workers with whom he appeared to share an unspoken bond. William Faulkner was one. (Hemingway was not.) He and Faulkner were comfortable simply sitting next to each other, silently, except for an occ

Published by Thriftbooks.com User , 19 years ago
This is a very good book. Hawks apparently left no papers, and some aspects of his life are undocumented. (For example, McCarthy keeps mentioning Hawks' great friendship with Gary Cooper, but because of both men being dead and no documentation, Cooper remains a very shadowy presence in this book. Hawks' friendship with William Faulkner gets far more space, since Faulkner left papers.)So there is not a lot about "the inner Hawks." However, there is a lot about Hawks' films. Once the talkies begin, there is a chapter on practically every film Hawks made. I was fascinated by the stories behind the films, how long it took some films to get made (Hatari began as an idea for a movie with Cooper), the films Hawks never made (apparently a very traditional vampire film), and his frequent tangles with Howard Hughes.McCarthy did a lot of research, and he does not uncritically accept the stories Hawks told (frequently told) about his work. So if you like the films of Howard Hawks and are familiar with books such as Hawks on Hawks and Howard Hawks Storyteller, this is a book that you will still get a lot out of.To use a term from Hawks' films: "This book is good enough."

That Others May Live

Published by Thriftbooks.com User , 22 years ago
This is a true life adventure about the Air Force's para jumpers, a group of heroes I've never heard about. In fact almost no one realizes that they are the ones on tv doing all those splashy things.They are the ones that dove out of the helicopters looking for John F. Kennedy Jr. They are the ones who are out there to save floundering people in the ocean. They are the ones who help with NASA and the space program to dive in the ocean and rescue or support the astronauts and equipment. I always though that those people who did this were the Coast Guard or Navy--no as I have learned.What this book does is tell the real life story of a local Long Island boy Jack Brehm, who winds up trying to make it in life by entering into this elite outfit, this fraternity of men even tougher than the Navy Seals or the Army Rangers, and does it. It tells the story of their training and the danger of each mission and how regardless of how good you are, regardless of what excellent shape you are in, any mission can be your last. The scenario for this real life adventure is supported by a cast that is Jack Brehm's family. A group of normal rambunctious kids who turn into teenagers and then adults while their father goes to work each day at the base and jumps into danger to save others. Then its home to the kids and wife. The contrast of a cold calculating job where a mistake can easily cause loss of life, and the warmth of the family make a juxtaposition that is really fascinating. I loved the book because it was a about a real hero. Someone who risks his life that others may live-and then he goes home and plays with the kids. Real life! Only for a very few whom we never hear about unless tragedy strikes.If you like real life adventure, I recommend it!
Trustpilot
Copyright © 2022 Thriftbooks.com Terms of Use | Privacy Policy | Do Not Sell My Personal Information | Accessibility Statement
ThriftBooks® and the ThriftBooks® logo are registered trademarks of Thrift Books Global, LLC