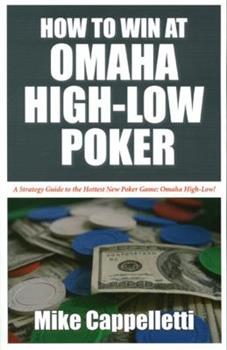 How to Win at Omaha High-Low Poker

Clearly written strategies and powerful advice shows the essential winning strategies for beating Omaha high-low poker This money-making guide includes more than sixty hard-hitting sections on Omaha. Players learn the rules of play, best startinghands, strategies for the flop, turn, and river, how to read the board for both high and low, dangerous draws, and how to beat low-limit tournaments. Includes odds charts, glossary, low-limit tips, and strategic...

Published by Thriftbooks.com User , 15 years ago
This book was key in my decision to emphasize Omaha Hi-Lo over Hold-em. Since reading it I have had a final table at the Bicycle Casino Mini Series of Poker and a few tournament wins at PokerStars, Absolute and True Poker. What was impressive to me was how he supported his opening hand recommendations with computer simulation, as I had used simulation tools in Scrabble and learned much from them. There may be a weakness in the area of postflop play, but the opening hand section is a big winner. The recommendations on how to play all-high hands were very good too.

If you know starting hands already, this book will help you.

Published by Thriftbooks.com User , 17 years ago
Cappelletti is too loose in his starting hand recommendations in my book. That being said, the rest of the material is very useful. I had already played a great deal of winning O8 before reading this book and I had read Zee's book, but was still able to find some great insightful advice to apply to my game when playing. I especially liked how he got into the differences in play between high flops and low flops and the push and pull hands. This book is very informative and will help your game, just don't play as loose as the author does preflop.

Published by Thriftbooks.com User , 17 years ago
This is a very helpful and entertaining book. It aided me in thinking about this potentially very profitable game. Combined with online information by Steve Badger and by Annie Duke, it has been enough to keep my O8 adventures profitable. The interesting new things I got from this book were the advice to play high flops aggressively, the raise with third nuts to drive out the second nuts (dangerous but very profitable at times) and the advice on table selection (Cappalletti's Number)The flaws:1: There should be a bit more about starting hand selection. O8 is a starting hand game. You are not often going to outplay anyone post-flop, at least I'M not.Having re-read the book, I will have to modify this part of the review. He does go into starting hand selection quite extensively but I found his ideas pretty much identical to what I had already picked up from other sources and not surprising or very intersting, although I think that they are correct. So, I didn't think that much about them when I wrote this review. He does seem to give less credence to the "all four cards must be useful" concept than Steve Badger, among others. Playing A2XX when XX are crap is fairly loose by the standards I was taught. However, make XX of ANY value at all and I agree it can be played profitably. 2: He digresses a great deal into hi-limit, pot-limit and other tough Omaha venues. He also gets into Holdem. These are some of the most entertaining moments in the book but won't be popular with those who want technical advice for profitable low-limit O8.3: He says O8 is fun. Not a matter of taste. He is wrong. My one other problem is that the one table of O8 that is usually in play at Foxwoods does not, whatever Mr. C's experience there in the past, usually consist of loose enough players to meet his ideal of a good table. On weekdays, especially, the number of people seeing the flop on average can get as low as 4 or even 3.5 I also don't see O8 growing in popularity the way Mr. C. does. It had its growth and I think that we will see a die-back. --Will in New Haven
Copyright © 2022 Thriftbooks.com Terms of Use | Privacy Policy | Do Not Sell My Personal Information | Accessibility Statement
ThriftBooks® and the ThriftBooks® logo are registered trademarks of Thrift Books Global, LLC