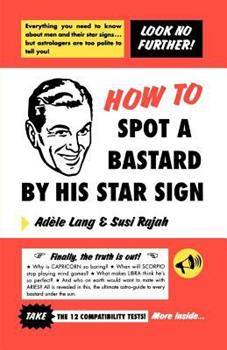 How to Spot a Bastard by His Star Sign: The Ultimate Horrorscope

by Adèle Lang and Susi Rajah

The Ultimate Horrorscope Join the women around the world whose love lives have been transformed by the astro-guide that pulls no punches when it comes to the dark side of men and their star signs. Use it to... -Deride, ridicule, and annoy the hell out of men - Speed up the dating process by using star sign elimination - Avoid dating complete scum - Keep current boyfriends/husbands in their places - Keep conversation going at dinner parties - And much,...

more parody than fact, but a joy to read

Published by Thriftbooks.com User , 19 years ago
This review is more in response to some of the reviews written about this book than the book itself, though I will get to that. To anyone who criticized the book's astrological credibility you completely missed the point. It's not meant to be completely accurate or to explore the complex sides of the discipline. It's just meant to be fun! If you're offended by the male-bashing humor, fine, but if your beef is with the stereotyping you need to lighten up! I don't think the authors took it seriously so neither should you. As for the book, it was the best $ I've spent in a while! As an astrology student of 10 years I was quite amused by how witty their descriptions of the dark sides of each zodiac archetype. They're fresh, they're quick and they're funny even if their understanding of astrology may not go beyond the supermarket variety. This book is a highly recommended read if you're in need of a laugh or are nursing a broken heart. You won't want to throw this away. Of course, if you're looking for a book that can give you sound astrological advice about romance and relationships look elsewhere. Astrology is a LOT more than sun sign stereotyping as the sign sign is only 1 aspect of a personality. Pick up a book that's more well rounded and then just buy this one for fun.

Published by Thriftbooks.com User , 19 years ago
This book defies categorization. Astrology? Humor? Relationships? Vitriol? All of the above, which is what makes it so fun. Ladies, if you've just been dumped or if you have a sneaking suspicion that the one you're with is a bastard, then this is the book for you. This absolutely unapologetic volume of man hatred takes the done-to-death astrology motif and applies it to defining a man's most despicable traits with frightening accuracy. Forget Linda Goodman's Love Signs. It's the bad stuff that can hurt you, and Lang and Rajah have detailed all of it in brutal honesty and high hilarity.This is the kind of book I want to throw away as soon as I've exorcised the demons that accompany my broken heart (and hurt pride), but that would be a waste, because I'm bound to need it again, even if only for some good old male-bashing fun. It's a must have for gen Xers, nexters, boomers, and any woman who engages in the dating war. It's well researched, well written, and well, it's just flat out a lot of fun.Compatibility tests are included to find out which bastard suits you best. After all, we still can't live with them or without them, bastard status notwithstanding. Guaranteed to perk up the crestfallen and the downright despondent.

Published by Thriftbooks.com User , 19 years ago
These two must have dated a whole load of guys to get it so right. OK, I only know first-hand about Pisces - the most lying, conniving, two-timing compulsive massagers of truth in the entire zodiac - but other (male) friends tell me theirs is pretty spot-on too. How do they know how men are really? We never let on until you've dated us for a while. Hence my first observation. Chicks, save yourself a world of heartache and read this cover to cover. Then get your defense in first.

Published by Thriftbooks.com User , 19 years ago
There's only one word for this book and that is 'genius'. As soon as I picked it up and flicked through I felt compelled to read it cover to cover - that very night! Everyone, even the non-believers among us, has a sneaky peek at our own star-sign or that of the man /woman we have in our sights (well, I know I do!) every now and again and this book just goes one hilarious stage further advising us who, astrologically, we might want to watch out for and why. And it does it in an effervescent, hilarious, dry and witty way. How To...takes a fur covered pussy cat paw swipe at the male gender and their shortcomings and it does it to absolute perfection with sparkling wit and subtle sarcasm. These girls actually know their astro stuff too and could no doubt spot a bastard (and his star sign) for fifty miles. I had such a laugh reading this with my girlfriends, (the general opinion being "If only we'd had this book 10 years ago!") and even my husband, whose Taurean discription in the book was so scarilly accurate he thought I was making it up! How To Spot A Bastard By His Star Sign is a harmless, hilarious, superbly-written and entertaining guide that, once you've stopped laughing along with it, could make you stop to realise that it actually has a real point. No girl should be without it!

Published by Thriftbooks.com User , 19 years ago
Why can't a man be more like a woman? How can I at least learn to understand them? It may help to know that men are packaged into 12 types: by their star signs. How to Spot a Bastard by his Star Sign helps you to understand how each type ticks!!! I had a ball leafing through the star signs of ex-boyfriends, finding their personality quirks described to a T in all phases of the relationship from first glance to the back end of the slamming door. No wonder I was so frustrated dating Leo Bastards. I even read aloud to my current Taurus boyfriend his own sign and we both had a good laugh. 'I don't do that, do I?' He kept saying. A great pick me up when feeling down and confused by the opposite sex, this humorous description of each man's star signs in relationships is a great read by yourself, but better with a group of girlfriends.
Copyright © 2020 Thriftbooks.com Terms of Use | Privacy Policy | Do Not Sell My Personal Information | Accessibility Statement
ThriftBooks® and the ThriftBooks® logo are registered trademarks of Thrift Books Global, LLC