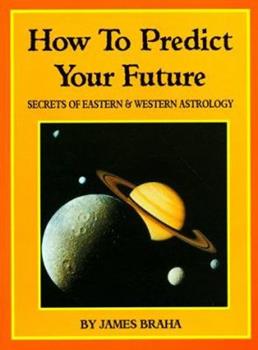 How to Predict Your Future: Secrets of Eastern and Western Astrology

Demonstrates two of the best predictive methods offered by the world of astrology. The book presents the predictive accuracy of ancient Hindu astrology with the spiritually rich astrology of the west. The descriptions of western transits are comprehensive, eloquent, and profound; Hindu dasas have never been explained so clearly and insightfully. Through western transits, the reader gains insight into the meaning and purpose of his or her changing...

This is the best transit book on the market

Published by Thriftbooks.com User , 14 years ago
I love this book. James Braha is a freakishly gifted writer. His interpretations of the various transits are clear, concise, confident and brave. He writes with authority but he is somehow able to convey emotion with his words and the result is a book which feels magic in your hands. This book is a gem. One you will refer to again and again. I think it is far and away the best treatment of (Western astrology) transits out there but sadly missed by many, most probably because judging by the title, they don't know what it is! James Braha is a thoughtful astrologer with a deep understanding of his subject but what really elevates his work is the heart and devotion that pours off every page. I own all his books, and for the soulful out there, you can't go wrong!

Western astrologers...don't miss this one

Published by Thriftbooks.com User , 16 years ago
For intepretations of Jupiter through Pluto transits, this book is outstanding. The descriptions of the transits are profound and accurate. This book shouldn't be missed, or skipped over by Western astrologers who are not interested in Vedic astrology. There is a lot of content for Western astrologers -- more than enough -- and it's invaluable.

A Masterpiece on predictive astrology!

Published by Thriftbooks.com User , 17 years ago
This is an outstanding book! The first section on Western transits is so good that it is worth it to buy the book for this section alone! The author explains in great detail the transits of the outer planets, Jupiter through Pluto, as they transit the various houses and planets in a horoscope and the effect they have on the individual. This is where the author's genius shines through, in the interpretations. I have read no other book on transits that is as accurate as this one. And I've read Robert Hand's book, Planets In Transit, which is considered a classic. Well the interpretations in How To Predict Your Future are even better and more accurate and downright profound! As an example, the author usually uses two or three different possibilities when a planet transits a natal planet or an angle. As a rule, I've found always that at least one of these possibilities presented in the book seems to come to fruition in one form or another (That is, in my chart and the charts of my family and friends!). There is no stone left unturned. The author covers every angle. It's as if he had the answers handed down to him directly from God! You won't be disappointed in this book whether you are a veteran astrologer with lots of experience, an amateur astrolger or you just want to make your predictions in your own chart.The section on Hindu astrology is presented in a clear manner enough for even the novice astrologer to understand. If you've never studied Hindu astrology, it is simply amazing in its predictive ability. It can predict periods of life anywhere from 6 months to 20 years with astounding accuracy! The Hindu chart can show you what planets are strong and what planets are weak and show you how to strengthen the weak planets so you can end your suffering in certain areas of life...something western astrology cannot do! The author explains how to do this by using what are known in India as upayes. The upayes that are recommended are gemstones, mantras and yagyas. The author carefully explains how to use them to your benefit to make your life more enjoyable with less suffering. He also explains many other Hindu techniques like Kujadosha, which is a condition whereby someone who has it, is recommended to marry another who has Kujadosha to ensure marital happiness. The Hindu section is full of techniques similar to this one. The author also gives example charts of famous people and relates Hindu astrology to these charts to give the reader an understanding of how Hindu astrology works in the real world. It is evident that the author put a tremendous amount of work into this maserpiece so the reader didn't have to. That is what makes this book fun to use also. If you were to buy one book on predictive astrology, this is hands down the book I would recommend!

Published by Thriftbooks.com User , 19 years ago
A nice content. The transits are finely delineated and there is a good reporting on the Dasa hindu system. Transits are often difficult to interpretate, since age, social environnement, sex have to be considered. The content is therfore pretty general. One would have expected more examples to benefit of the synergy of these two systems. On the other hand, bridging the occidental transit approach with the Dasa clock lets a basic question open: What are the specific transits methods of Hindu astrology? How many techniques and systems are used? We are waiting for the next book of James Braha...

Predictive astrology of the best kind

Published by Thriftbooks.com User , 23 years ago
If you want to know about Western transits and Vedic dasas (the Vedic predictive system) this is the book for you. In particular I like the part about Hindu predictive astrology. James shows how this system works and gives many examples of the use of the Hindu predictive system. If you want to know what is happening and why this is the book for you!
Copyright © 2022 Thriftbooks.com Terms of Use | Privacy Policy | Do Not Sell My Personal Information | Accessibility Statement
ThriftBooks® and the ThriftBooks® logo are registered trademarks of Thrift Books Global, LLC