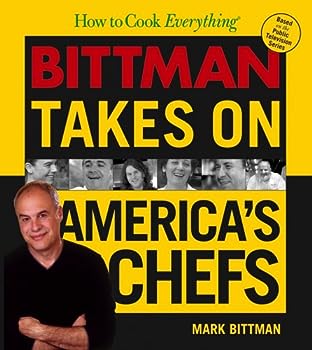 How to Cook Everything: Bittman Takes on America's Chefs

(Part of the How to Cook Everything Series)

It's a battle of restaurant style vs. homestyle as Mark Bittman takes on the nation's top chefs with accessible versions of some of their favorite dishes. Mark Bittman is famous for the simple,... This description may be from another edition of this product.

A smorgasbord of great chefs and Bittman's simplicity too!

Published by Thriftbooks.com User , 17 years ago
The time may yet come this summer when you tire of the same old steak, burgers and chicken on the barbecue and yearn for something a little different. Like Lemongrass-Grilled Rack of Lamb with Tamarind Sauce, perhaps, or Grilled Tuna with Soy, Wasabi, and Pickled Ginger or a Lobster Burger involving scallops, ginger mayonnaise and Tomato Confit. These are restaurant-style chef dishes, of course, and Bittman's responses, intended to show how simple, home-cooked food can be just as enjoyable are, respectively: Grilled Squid with Black Pepper and Sesame-Lemon Sauce, Tuna Teriyaki, and a Lobster Roll, served with melted butter on a hot dog bun. It's a gimmicky idea, but fun, even if the connections sometimes seem farfetched (rack of lamb vs. squid?). Bittman, author of "The Minimalist" column as well as many books, adheres to a simplify-without-sacrifice philosophy and consequently is wildly popular with busy but serious home cooks. This book accompanies Bittman's public television series and includes short profiles of the 13 chefs, their restaurants and their dishes juxtaposed with Bittman's responses. Sidebars include some of the show's repartee as well as cooking tips (like Jean-Georges Vongerichten's subtle use of cayenne instead of black pepper to season fish) and Bittman's variations, simplifications, explanations and suggestions for home cooks who want to prepare the chefs' signature dishes (Gary Danko's Duck Confit and Potato Hash as template for croquettes of many kinds; choosing lemons or persimmons, making shrimp shell stock, clarifying butter). The chefs run the gamut from classical French (Daniel Boulud, Michel Richard) to Vietnamese (Charles Phan), Spanish (Jose Andres), Indian (Suvir Saran) and various trendy Americans (Kerry Simon, Anna Klinger, James Boyce). Some are young, some well established; all are confident and opinionated. Illustrated with shots taken from the TV show, this is a clever, energetic book which offers a smorgasbord of the nation's leading cooks and an expert home cook's take on a wide range of recipes and techniques.

Ignore the "Challenge" Try the Recipes

Published by Thriftbooks.com User , 17 years ago
The basic premise of this book is that the recipies concocted by the author featuring simple down to earth cooking can compete with the chefs from fancy four star restaurants. Each "challenge" resents a chef's special dish followed by Bittman's more accessible interpretation. My conclusion is that "No, they don't compete." The basic rules are too different. Instead, what the guest chef cooks and what the author cooks are two different dishes. In looking over the recipies, sometimes I would prefer one, sometimes the other, often both sound like they would be good to eat --Example: A chef cooked Baked Stuffed Crab, Bittman cooked crab soup. Not the same disk, but I could handle either one but the baked one sounds better. This book is the companion to a series of TV shows where these "challenges" will be shown. Here you have the recipe and you can cook either one or both at your leisure. The challenge part is just part of the TV show. The recipes are what count.

Good Idea with some good recipes

Published by Thriftbooks.com User , 17 years ago
The idea of presenting complex and time consuming recipes from renowned chefs along side simplified versions is a great one. Bittman falls a little short in this regard since his recipes are not simplifications or variations in most cases, but a different recipe with similar main ingredients and a similar effect. This aside, I like the cook book and have been pleased with the results from the recipes I have tried, especailly the Apple Confit, an impressive and time consuming dessert. The food inside is good, so all other complaints are just nit-picking.

Published by Thriftbooks.com User , 17 years ago
`How to Cook Everything, Bittman Takes on America's Chefs' by New York Times culinary journalist, Mark Bittman is another step in turning his `How to Cook Everything' into a brand and by raising expectations for what one may find in this book. Bittman certainly raised my expectations high enough to buy it immediately upon seeing the name of the author and the subject. Contrary to my glib title to this review, this book is much less a real cooking competition between Bittman and famous chefs than it is a `cover story' for a foodie book genre which may have been created by Julia Child late in her PBS career. The underlying structure is that the host, a journalist / cookbook author as with Bittman or Child or a famous chef, as in the case of Jeremiah Tower, visits each `FAMOUS CHEF' in their restaurant kitchens or similar venue and cook some stuff. In the case of Julia Child, the focus was strictly on the cuisine of the visiting fireman. Bittman tweaks the premise by adding his own home cooking dishes to match up with the efforts of the professional. Then, with no judges or time clocks in evidence, each samples the other's dishes. One of the first revelations in this book is that Bittman admits to not being a very good cook himself. While this is very interesting, it is not surprising, as Jim Villas in his `Between Bites' essay on Craig Claiborne, states that the great New York Times culinary writer was pretty deliberate in the kitchen himself (a kind way of saying `slow'). I believe it is fair to say that this certainly does not mean Bittman or Claiborne don't know food and cooking. It means that they have not spent years cooking the same dishes over and over and they have not spend decades practicing their knife skills to the point where they can reduce an onion to a fine dice in seconds. In contrast, Chris Schlesinger describes Bittman's knife skills with an onion as an exercise in `hacking'. My anticipation and enthusiasm for the book grew as I started reading about the differences between home and professional cooking. I have seen it said before, but never with such force, that while many restaurant dishes simply cannot be done in the home, the opposite is true as well. There are some dishes that simply cannot be made as well in a restaurant as they can at home. The primary advantage of the restaurant kitchen are the very hot heat sources, either as oven, wok, or grill plus specialized forms of heat such as salamanders and Indian tandoori ovens. Other advantages are the battalion of prep chefs and the access to very high quality ingredients (See the excellent essay on this matter in `Kinkead's Cookbook'). The home cook has the advantage of time. If a dish requires a long cooking time followed by immediate delivery to the dinner table, a restaurant simply cannot make it. All restaurant dishes must be prepped up to the final step, where ingredients sit in preparation to be fired and completed in no more than 20 minutes. So now I have read the
Trustpilot
Copyright © 2022 Thriftbooks.com Terms of Use | Privacy Policy | Do Not Sell My Personal Information | Cookie Preferences | Accessibility Statement
ThriftBooks® and the ThriftBooks® logo are registered trademarks of Thrift Books Global, LLC