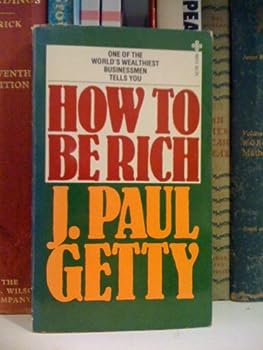 How to Be Rich

Learn J. Paul Getty's secrets on making money and getting rich in this "excellent How To book from a $$$ and sense man" ( Kirkus Reviews ). There are plenty of books on making money by men who haven't... This description may be from another edition of this product.

Published by Thriftbooks.com User , 16 years ago
J. Paul Getty lays a clear map for guiding yourself to richness. Early on, Getty asserts that being "rich" is not a number, but truly a state of mind. In his view, there is no magic potion, mantra or affirmation that will garner you more goodies. If you want money, get out and work for it. If you want to be rich you must work for yourself. And once you hire people, even though you bear all responsibility for what happens, encourage your competent employees to think and act as if they are running their own company. Getty got rich because he understood the fundamentals of economics, thanks to his parents. Getty reasoned that the whole point of economic growth is to enhance your own life, as well as the lives of those around you. Wealth and wealth seeking is made to seem loathsome in some altruistic circles. Yet, within the pages of "How To Be Rich", you find a man who consistently laid his ego aside and sweated alongside oil-workers. As his standard of living rose, so did that standard of living of numerous other people around him. It may appear as if Getty encourages trickle-down economics. Getty worked fast and hard so as to turn any trickle into a gushing spring. If things didn't go his way, Getty maintained a "calm", and thus more productive demeanor, and found solutions. He admits to his screw-ups and delineates characteristics that promote success. In short, Getty delivers a worthwhile read for any aspiring person.

'Richness' has as much to do with perspective as wealth

Published by Thriftbooks.com User , 22 years ago
Getty brilliantly and boldly shares the attitude, ethics, backbone and independent thinking that was the key to his prosperity. Don't look merely for 'how-to-make-more-money' tips: this book transcends that. If you're looking for honest, direct insight on how to 'be' successful in any business day or age, Getty is the man!

Knowledge is Power. This book is full of Knowledge.

Published by Thriftbooks.com User , 23 years ago
This is not a book about how to get rich. As its title implies, it is a book about how to be rich. Accordingly, much of Getty's advice is directed toward the development of a particular state of mind rather than detailing a formula for monetary acquisition. Although Getty earned the basis of his mega-fortune as a wildcatter in the oilfields of California, Texas and Oklahoma, he was a highly-educated man. Following graduation from college in California, he attended Oxford University, earning a graduate degree there. Only after his return from England did he plunge into the enterprise of oil exploration and drilling that paid off so handsomely. Thus, Getty's book is not the one-dimensional tract so commonly written today by lesser intellects. He discusses what it means to be rich -- the attitudes, the appreciation for the cultural heritage of classical music, literature and art (The Getty museum in California, based on his original collections, is one of the largest repositories of fine art in the world today). He discusses how an individual's outlook and attitudes constitute a virtual program for either success or failure. Then he provides the intellectual tools for changing self-limiting habits and developing productive and beneficial ones. He provides practical advice and an expert evaluation of the various forms of investment. In recent years, we have seen sports figures, entertainers and lawsuit winners squander their fortunes. On the other hand, we have seen immigrants like those who escaped Castro's Cuba with nothing but their lives -- their entire life's work stolen by the communist thugs -- only to earn a second fortune in the US. Why is this? Because, having been rich, they knew how to be rich -- they had programmed themselves to be rich. Getty's book goes a long way toward imparting that information to its readers. Once in possession of Getty's guidance, however, the hard work of implementing it still lies ahead, but his book is a literary roadmap to success without peer.

Published by Thriftbooks.com User , 24 years ago
A lot of books tell you how to be rich, but they rarely work. This book is truthful and written by a man who in todays dollars would be richer than Bill Gates and Warren Buffett combined. This is the best book I have ever bought on finance. Getty doesn't cut corners on his advice. Best of all this book makes a lot of sense, and doesn't sugar coat the truth. This is something that cannot be said for many books.
Copyright © 2022 Thriftbooks.com Terms of Use | Privacy Policy | Do Not Sell My Personal Information | Accessibility Statement
ThriftBooks® and the ThriftBooks® logo are registered trademarks of Thrift Books Global, LLC